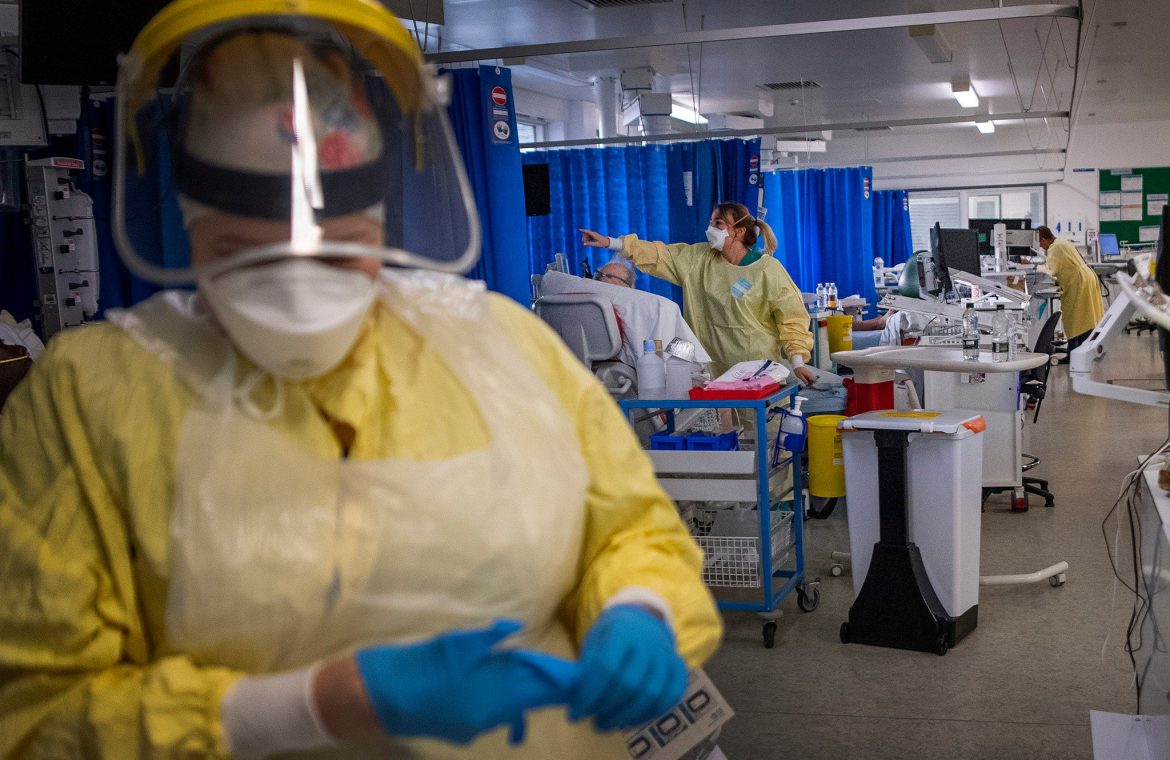 One in eight people in England are estimated to have had Covid-19 by December last year, according to the latest data from the Office for National Statistics.

Figures estimating a total of 5.4 million people, or 12.1 per cent of the population, would have tested positive for coronavirus antibodies by last month were released as a health boss warned many intensive care units are “already overwhelmed”.

Alison Pittard, who heads the Faculty of Intensive Care Medicine, said NHS staff were “almost on their knees” as wards continue to see “unprecedented numbers of cases, large numbers of very, very sick people, many of whom are dying”.

Earlier, Matt Hancock — who has revealed he is self isolating after a test and trace alert — urged the public not to “blow it” by relaxing adherence to social distancing rules as more people are vaccinated, as an adviser from the government’s Sage group warned people had been mistakenly believing they were “good to go” after receiving a jab.

Meanwhile, cabinet minister Brandon Lewis argued it was “natural” that some over-70s would recieve the vaccine before higher priority groups after Therese Coffey, the work and pensions secretary, protested that the “oldest and most vulnerable” in her constituency were being passed over.

Dr Jenny Harries, a top doctor from the government’s health department, said a regional approach may be taken when deciding how schools will reopen across England.

Addressing the Education Select Committee of MPs, Dr Harries, who serves as deputy chief medical officer at the Department for Health and Social Care, said: “I think it’s likely that we will have some sort of regional separation of interventions.”

She added: “So I think on the broad epidemiology it is highly likely that when we come out of this national lockdown we will not have consistent patterns of infection in our communities across the country.

“And therefore, as we had prior to the national lockdown, it may well be possible that we need to have some differential application.”

1611054053Vaccinated people are preparing to meet others believing they are ‘good to go’, government adviser warns

People are preparing to meet friends and family as soon as they are vaccinated in the mistaken belief they are “good to go”, a leading government adviser is warning.

Surveys point to a “day or two before the Armistice” effect, Dr David Halpern said – with people wrongly thinking they and others immediately have Covid-19 protection when in fact takes “at least 12 day, 2 weeks” before a jab delivers any immunity.

“We definitely do worry that people feel that, the second they have got that vaccination, they are good to go,” the Sage adviser told MPs.

Yesterday Mark Drakeford, the first minister of Wales, defended his government’s slower rollout of the vaccination programme, now his health minister has denied doses are being held back.

Vaughan Gething said the rollout is going “as fast as possible”, adding the government is doing “a really good job” in increasing the pace.

Mr Gething said he understood the way Mr Drakeford’s comments were “interpreted” may have been unsettling, but that the Welsh Labour leader has since “clarified” that no vaccines are being held back.

Mr Gething told BBC Radio Wales: “I can’t be any clearer. There is pace, there is urgency, and there is real achievement. Our NHS Wales staff are working incredibly hard and they’re delivering more and more vaccines into people’s arms every single week.

“We’re not hoarding the vaccine. We’re not preventing it from being released. We’re doing as much as possible as quickly as possible.”

Dame Cressida Dick said she was “baffled” why frontline police officers have not been given any priority in the vaccine rollout.

The Metropolitan Police Commissioner told LBC radio: “In cohort five to nine you have people in what I might call my age group and I am baffled really why, but obviously this is a decision that the government’s made so far on the basis of something called the JCVI (Joint Committee on Vaccination and Immunisation), who are experts.

“But in many other countries, police officers and law enforcement colleagues are being prioritised and I want my officers to get the vaccination.”

Dame Cressida said there have been 97 incidents where someone has mentioned or threatened Covid before coughing at an officer, with 48 spitting attacks.

Vaccines minister Nadhim Zahawi said yesterday he believed police officers, alongside other exposed workers such as shopkeepers, should be prioritised in phase two of the rollout, though he noted the government would follow JCVI advice on who to target.

According to Croatian police, the perpetrators have been detained and, if found guilty, could face up to three years in prison, reports Total Croatia News. The travellers were all stopped trying to cross the border from Bosnia and Herzegovina.

Travel restrictions currently state that people can only enter Croatia from the neighbouring country if they present evidence of a negative PCR test or a doctor’s certificate proving they have already been infected with and recovered from the virus in recent months.

A GP in Yorkshire said it was taking a huge amount of time to contact patients directly about being vaccinated.

Dr Zoe Norris, who works in Beverley, told BBC Breakfast earlier that some patients will be contacted by phone while people near to mass vaccination hubs will receive letters.

She added: “What we have done is initially we are ringing our patients who are in the first couple of groups so you can imagine it takes a huge amount of time, you’re talking 1,000 patients at least for one batch of vaccine.

“So ringing those patients, making sure they know where to go, they have got people to bring them down if they are elderly and frail.”

One in eight people in England are estimated to have developed antibodies against Covid-19, according to the latest data.

Figures from the Office for National Statistics suggest that a total of 5.4 million people, or 12.1 per cent of the population, would have returned a positive result if tested for antibodies in December.

This is up from November’s estimate of 3.9 million, and the highest available figure since the beginning of the pandemic.

More coming on this from Samuel Lovett:

Matt Hancock has said he will self-isolate until the end of the week after receiving a test and trace alert on the NHS app.

In a video message the health secretary said complying with notifications on the app was “perhaps the most important part of all social distancing” regulations.

More coming on this from Jon Stone:

After Therese Coffey flagged yesterday that over-70s in her constituency were being offered vaccines before the eldest and highest priority group, Brandon Lewis argued it was “natural” for this to happen.

Health chiefs must begin offering jabs to that younger cohort to avoid “gaps where people are not getting vaccines at all”, the Northern Ireland secretary said.

Ms Pittard, who heads the Faculty of Intensive Care Medicine, told Sky News: “There are many intensive care units and hospitals around the country that are already overwhelmed – seeing unprecedented numbers of cases, large numbers of very, very sick people, many of whom are dying.

“I think healthcare professionals who hear their situation described as not being overwhelmed is unfair.”

Nurses work in the ICU of St George’s Hospital in Tooting, where the number of critical care beds had to be doubled to meet demand

Don't Miss it COVID-19 cases surge in the US state of Florida | 7.30
Up Next Nearly two-thirds of Canadians support coronavirus curfew, despite doubts about effectiveness: poll