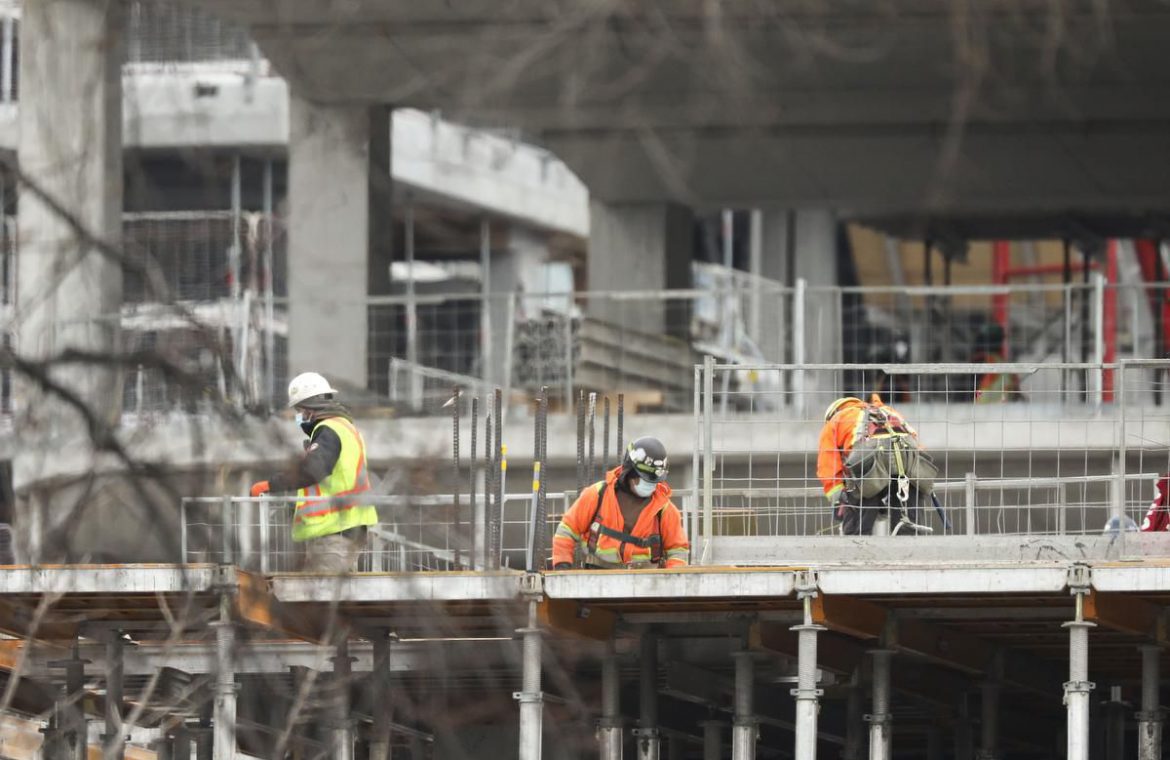 6:15 a.m.: British Columbia is updating its immunization strategy for COVID-19

7:25 a.m. Peel Public Health is reporting three COVID-19 outbreaks at licensed childcare facilities in Brampton and Mississauga over the past week.

On Jan 14, an outbreak was declared at Little Angels 2 Christian Care in Mississauga, on Jan. 17 where two children and two staff recently tested positive.

An outbreak was declared at Brightpath on Queen Street in Brampton, where one child and two staff are affected.

On Jan. 18 Yunaland Day Care and Family Services declared an outbreak, where the Ministry of Education states that three children tested positive.

The Ontario government is reporting recent COVID-19 cases at more than 28 childcare settings in Brampton and Mississauga.

The Mississauga Ridgeway YMCA Child Care centre has four children and seven staff affected by COVID-19 according to data released by the province on Jan. 21.

Also, in Mississauga, Royal Windsor Montessori and Daycare had two children test positive and St. Hilary’s is reporting one child and two adults.

7:18 a.m. Richmond Hill Ward 2 Coun. Tom Muench allegedly broke quarantine and delivered “prizes” to two residents in person on New Year’s Eve after returning to Canada from Aruba, according to an anonymous source.

Shortly after Muench admitted to travelling abroad during the lockdown period, multiple sources reached out to the Liberal and said the councillor went to Aruba — a popular Caribbean vacation destination — in December.

The councillor previously said he travelled “for health reasons” without disclosing where he went and how long he had stayed despite repeated media requests.

The source revealed that Muench returned to Canada on Dec. 30 and was supposed to quarantine for two weeks.

However, the councillor allegedly broke his quarantine the next day by going out of his house and personally delivering laptops as prizes to two winners of a virtual trivia event he hosted earlier that day.

Unlike his first virtual trivia event on Dec. 6, which was promoted on his social media platforms and through posters in the community, the councillor’s New Year’s Eve event wasn’t widely publicized, and the video has been removed from YouTube.

In an earlier email response, Muench said he adhered to “all applicable COVID-19 travel regulations and requirements.”

When the Liberal asked him if he had complied with the 14-day quarantine rules, the councillor did not respond.

It is unclear whether the councillor has been penalized for the alleged violation.

6:26 a.m.: The death toll from the coronavirus in Germany has passed 50,000, a number that has risen swiftly over recent weeks even as infection figures are finally declining.

The country’s disease control centre, the Robert Koch Institute, said Friday that another 859 deaths were reported over the past 24 hours, taking the total so far to 50,642.

Germany had a comparatively small number of deaths in the pandemic’s first phase and was able to lift many restrictions quickly.

But it has seen much higher levels of infections in the fall and winter. Hundreds of deaths, sometimes more than 1,000, have been reported daily in the country of 83 million people over recent weeks. Germany hit the 40,000 mark on Jan. 10.

President Frank-Walter Steinmeier will leave a light shining in a window at his Bellevue palace in Berlin every evening starting Friday in memory of the dead and those fighting for their lives, his office said. He encouraged other Germans to do the same.

6:25 a.m.: South Korea has reported its smallest daily increase in coronavirus infections in two months as officials express cautious hope that the country is beginning to wiggle out from its worst surge of the pandemic.

The 346 new cases reported by the Korea Disease Control and Prevention Agency on Friday brought the national caseload to 74,262, including 1,328 deaths. The agency said 240 of the new infections were from the greater Seoul area, home to half of the country’s 51 million people, which was hit hardest during a weekslong surge in transmissions that began in mid-November.

Health authorities have clamped down on private social gatherings since late December, including fining restaurants that accepted large groups of diners. After a Christmas Day high of 1,241, daily new infections have slowed to around 400 to 600 in recent weeks, and officials eased some of the social distancing rules.

6:24 a.m.: Shanghai has imposed lockdowns on two of China’s best-known hospitals after they were linked to new coronavirus cases.

Outpatient services have been suspended at Fudan University Shanghai Cancer Center and Renji Hospital. They have been cordoned off, along with some surrounding residential communities.

After months of quelling small clusters with mass testing, isolation and social distancing, China has seen outbreaks grow this winter, mainly in its frigid north. The National Health Commission on Friday announced 103 new cases had been detected over the past 24 hours.

Lockdowns have also been imposed in parts of Beijing and other cities following outbreaks, schools are letting out early and citizens have been told to stay home for next month’s Lunar New Year holiday. China hopes to vaccinate 50 million people against the virus by the middle of February.

Shanghai had six of the cases reported Friday. The two hospitals were put under lockdown after suspected cases were found at them on Wednesday and Thursday. It’s not immediately clear if any additional cases were linked to the hospitals.

Heilongjiang province in the far north reported 47 new cases, followed by Jilin just to the south with 19 and Hebei province just outside Beijing with 18. Beijing itself recorded three new cases.

Chinese hospitals are currently treating 1,674 patients for COVID-19, of which 80 are in serious condition, while another 929 are under observation for testing positive without displaying any symptoms.

6:15 a.m.: British Columbia is updating its immunization strategy for COVID-19 today as Premier John Horgan is scheduled to be joined by health officials to lay out the latest on the government’s plan.

Nearly 31,000 doses of vaccine that the province expected to arrive by Jan. 29 could be curtailed due to production delays in the supply from Pfizer-BioNTech.

Two doses of the vaccine are needed to ensure immunity from the virus that causes COVID-19 and Health Minister Adrian Dix said earlier this week that B.C. was set to begin administering second doses.

He said the province remains committed to ensuring all those who have had the first shot get a second dose within 35 days.

On Thursday, the province said it had administered 104,901 doses of COVID-19 vaccine, of which 1,680 were second doses

6:15 a.m.: Several southern Ontario school boards that straddle public health units are gearing up to reopen only a portion of their schools to in-person learning next week, adding another layer of complexity to an academic year that’s been defined by quick pivots.

The government order allowing schools in seven public health units to reopen physical classrooms as of Monday means nine boards now have to create different plans for different towns in their jurisdiction.

“It’s definitely more difficult to have one board be going in two different directions,” said Diane Lloyd, chair of the Kawartha Pine Ridge District School Board, which oversees schools in Clarington, Ont., that will remain closed and ones in Northumberland and Peterborough that will reopen.

She said the board began reaching out to parents immediately after receiving word of the plan from the Ministry of Education in an effort to prevent any confusion.

“The challenge is being ready to pivot all the time on short notice,” Lloyd said.

Thursday 8 p.m.: Prime Minister Justin Trudeau spoke to Pfizer CEO Albert Bourla by phone Thursday, the same day the company informed Canada delays to its shipments of COVID-19 vaccines are going to be even worse than previously thought.

In exchange, Pfizer expects to be able to ship hundreds of millions more doses worldwide over the rest of 2021.

Tuesday, Fortin said Canada would receive 80 per cent of the previously expected doses this week, nothing at all next week, and about half the promised deliveries in the first two weeks of February.

Thursday, he said the doses delivered in the first week of February will only be 79,000, one one-fifth of what was once expected. Fortin doesn’t know yet what will come the week after, but overall, Canada’s doses over three weeks are going to be just one-third of what had been planned.

Don't Miss it London coronavirus cases down by 29,000 in a week amid signs Covid hospital admissions may have peaked
Up Next How Joe President Biden’s Covid-19 plan can fix America’s vaccine mess