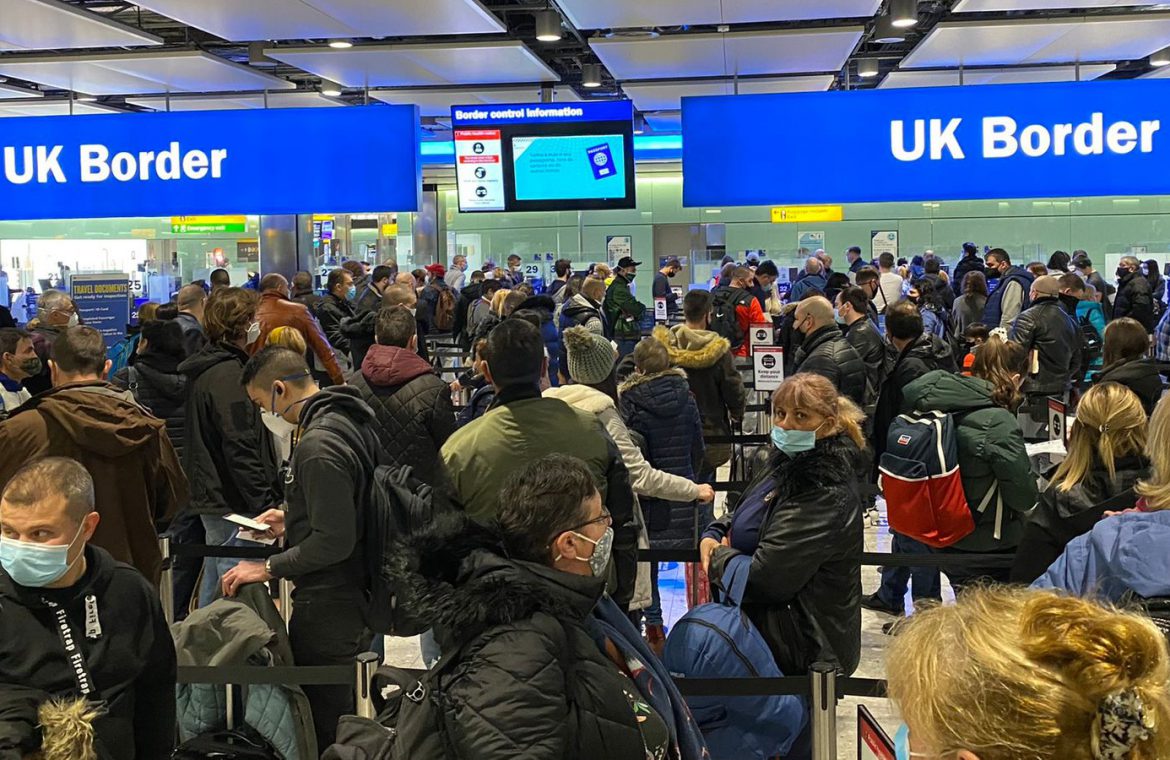 Pictures and videos of huge queues for passport control have appeared on social media in recent days, despite international travel being largely banned.

Britons are only allowed to go abroad for a small number of “legally permitted reasons” during lockdown, with arrivals requiring a negative coronavirus test from the past 72 hours before they are allowed entry.

But Labour’s shadow home secretary Nick Thomas-Symonds described the scenes at the airport as “incredibly worrying”.

Claiming the government was “lurching from one crisis to another”, he added: “They are incredibly worrying, with no social distancing and clearly risking transmission of yet more strains of this awful virus.

“Ministers need to get a grip to protect our country’s health.”

E-gates at Heathrow have been closed, leaving border guards to have to check paperwork and passports manually.

A government spokesperson said it is “ultimately up to individual airports to ensure social distancing on site”.

But Heathrow has claimed it is in fact Border Force who are responsible for enforcing the rules.

The airport said that a two-metre rule inside airports has never been feasible, adding: “We’ve been clear since last May really that social distancing in an airport environment isn’t really possible.

“To put that in context, if you had one aircraft of let’s say 300 people, you’d need a queue about 1km long to socially distance just one aircraft, which is why last summer we mandated face coverings in the airport.”

The government insists that Border Force is “ramping up enforcement”, with those breaking the new negative test rule getting £500 fines.

At a Downing Street news briefing on Friday, Prime Minister Boris Johnson suggested travel restrictions may have to be tightened further amid fears the new variant of the virus is more deadly.

“We don’t want to put that (efforts to control the virus) at risk by having a new variant come back in,” he said.

This could mean requiring people to complete their 10-day self-isolation at airport hotels – as opposed to allowing them to travel to their home or destination first, it has been reported.

The government’s travel corridor scheme was scrapped earlier this month meaning every person that arrives in the UK by plane, boat or train has to quarantine for 10 days – except for a small number of exemptions.

Ministers decided to ban all travel to and from Brazil and Portugal after a new COVID-19 variant was identified there.

On Friday, Portugal reciprocated the measure, blaming a recent dramatic rise in cases on the UK’s second variant.

Emma Moore, the chief operating officer at Border Force, said: “We are in a global health pandemic which is why every traveller is subject to enhanced monitoring at UK airports in line with the public health measures at the border.

“Every essential check from pre-departure testing, to the Passenger Locator Form and the suspension of travel routes is to strengthen our borders and prevent the spread coronavirus into the UK.

“People should not be travelling unless necessary. Every airport across the UK has a responsibility to comply with social distancing and Covid compliant measures on site,” Ms Moore added.