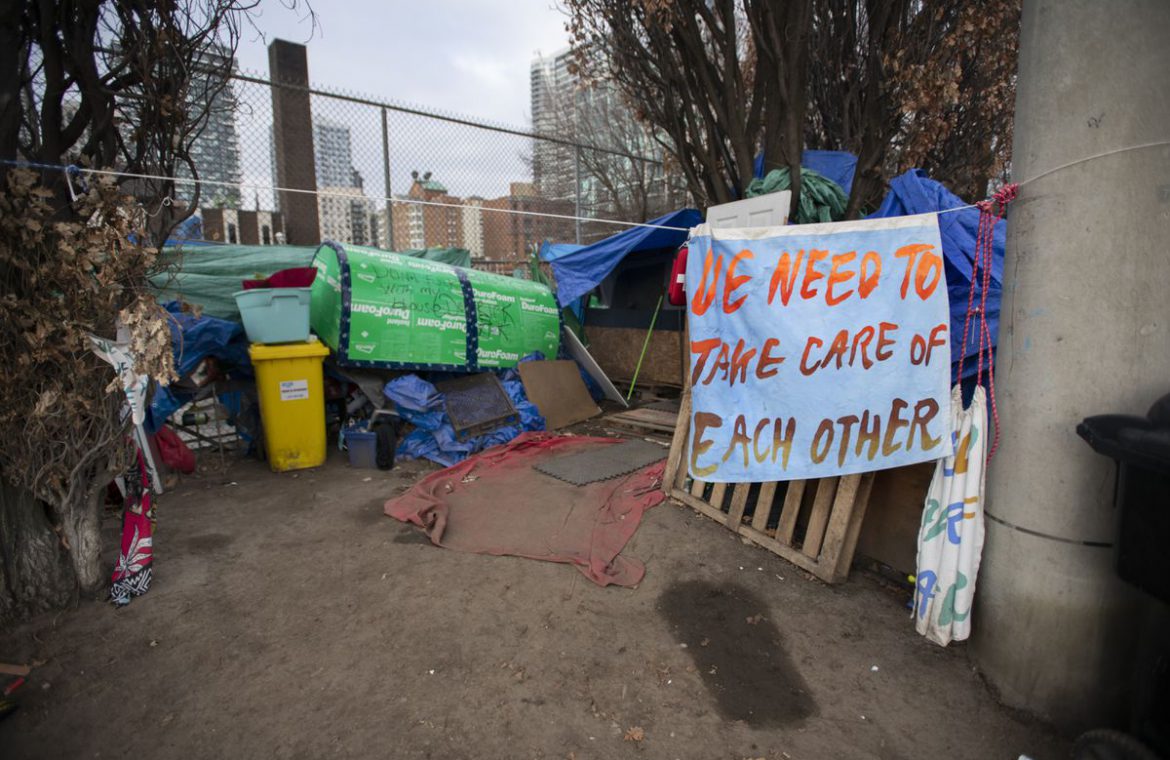 Tents and other shelters at an encampment in downtown Toronto’s Moss Park on Jan. 21, 2021.

COVID-19 is again on the rise among Toronto’s homeless – considered among the most vulnerable potential victims of the virus – with outbreaks at seven shelters and 43 recent cases among people living on the streets.

With case counts rising amid fears of a more potent British variant of the virus, the City of Toronto’s shelters division says its pandemic isolation centre for the homeless could soon run out of room, forcing it to find other places for people with nowhere else to go to quarantine.

But advocates for the homeless are raising alarm about what they say are the city’s confusing contingency plans, which could see some asymptomatic homeless people awaiting COVID-19 test results sent back to the shelter system, where experts warn the virus can still spread easily.

“It’s a fire just waiting to blow the doors out,” said Toronto street nurse Cathy Crowe, a long-time activist for the homeless.

For months, Toronto has seen few new cases in its shelters, after more than 650 shelter users tested positive last year and six died. About 7,000 people use the city’s shelter network each night, and experts have warned that the aging and often already-ill homeless population, living in cramped shelter spaces, are especially vulnerable to COVID-19.

Last year, the city moved about 2,000 homeless people out of its conventional shelters and into leased hotel rooms to allow for more physical distancing across the system. It also converted a west-end hotel into a separate isolation and recovery centre for homeless people, staffing it with doctors, nurses and shelter and harm-reduction workers.

But six shelters have had outbreaks in the past month, with a seventh that started in November, according to the latest numbers released by the city. Among them are 15 cases at the Salvation Army’s Maxwell Meighen Centre on the east side of the city’s downtown, and 16 at the former Roehampton Hotel in midtown. The Islington Seniors Shelter in the west end has three cases.

Exterior of the Maxwell Meighen Centre near Moss Park, in downtown Toronto on Jan. 21, 2021.

The new outbreaks mean the city’s isolation centre for shelter users is now hitting its current capacity of about 100 people. The centre is staffing up and will be able to accommodate up to 148 people within days, but the city fears that demand could soon exceed even this larger capacity.

Last week, the city’s shelter department held a conference call to brief its independent shelter operators on contingency plans if it runs out of isolation spaces. After the plans sparked questions and confusion, it held a second briefing this week to try to clarify them.

The new policy, as laid out on the city’s conference call, would see spots in the isolation centre prioritized for COVID-19-positive homeless people with symptoms, and who have other medical conditions or mental health and substance-abuse issues. Symptomatic high-risk close contacts, and those awaiting tests and showing symptoms, would also be given priority.

But other homeless people who test positive but have no symptoms, as well as asymptomatic high-risk contacts, would “not be prioritized for the COVID Recovery Site,” according to point-form slides used during the conference call and obtained by The Globe and Mail.

The city could send people in these categories to the other pandemic isolation hotels set up for residents who live in crowded apartments in Toronto and Peel Region, the slide deck says. But it also says some could be sent back to shelters to self-isolate, “where appropriate.”

Diana Chan McNally, a co-ordinator with the Toronto Drop-In Network, an umbrella group for local drop-in centres and soup kitchens, called the plans shocking and confusing, and said the city should have anticipated the need for more isolation spaces.

“It’s not as though any of this is unexpected. We knew with the second wave and with the numbers [of cases] there was a high likelihood that we would see more folks at the recovery site,” she said. “So just hearing about this all of a sudden, and with them also nearing capacity, is extremely alarming.”

One shelter provider sent out a memo to staff this week warning that the city’s isolation centre was hitting “maximum capacity” and that homeless people who are awaiting test results and are asymptomatic could be sent back to the shelter.

“If someone from a community assessment centre or hospital calls to discharge a guest awaiting test results back to one of our sites, please first inform them that we do not have isolated spaces and they would be returning to a congregate space without separate rooms,” the memo reads, adding that any such individuals should wear a mask, be educated about the need for physical distancing and keep their cot six feet away from others.

In an e-mail in response to questions from the The Globe, city officials said the “option to remain at the shelter would only be made if the individual could be completely isolated with the appropriate medical support, i.e. a hotel setting.”

Gord Tanner, Toronto’s director of homeless initiatives and prevention, said in an interview this week that no one who tests positive for COVID-19 would be sent back to shelters or shelter hotels. Instead, he said, spaces at other facilities would be found.

But he confirmed that some homeless people without symptoms who were awaiting test results could be told to isolate back in the shelter system if space runs out at the isolation centre. He said each case would be subject to a risk assessment, and that the shelter department was consulting with Toronto Public Health.

Andrew Bond, the medical director of Inner City Health Associates, the group of doctors that runs the city’s homeless isolation centre, said only asymptomatic people considered at lower risk of actually having the virus while awaiting their test results would ever be sent back to a shelter – and only then if it is possible for them to safely isolate there.

The contingency plans are aimed at allowing for a triage approach, to use the homeless isolation centre for the most serious cases, Dr. Bond said. But he also said the centre may avoid having to use the plans at all, and will manage within its maximum capacity of 148 people.

“We don’t think we’re actually going to break that level,” Dr. Bond said. “But just in case we do, we are planning a couple weeks to a month ahead, so that if it does get into a crunch point … [we can] just turn the key and move.”

Lauren Lapointe-Shaw, a researcher and clinical epidemiologist at Toronto’s University Health Network, said sending asymptomatic people back to shelters while they await tests would be unwise, since asymptomatic transmission is behind 20 to 50 per cent of COVID-19 cases.

“The devil is going to be in the details to make sure that this policy doesn’t just lead to the [shelters] going up like a box of matches, with COVID spreading willy-nilly,” Dr. Lapointe-Shaw said.