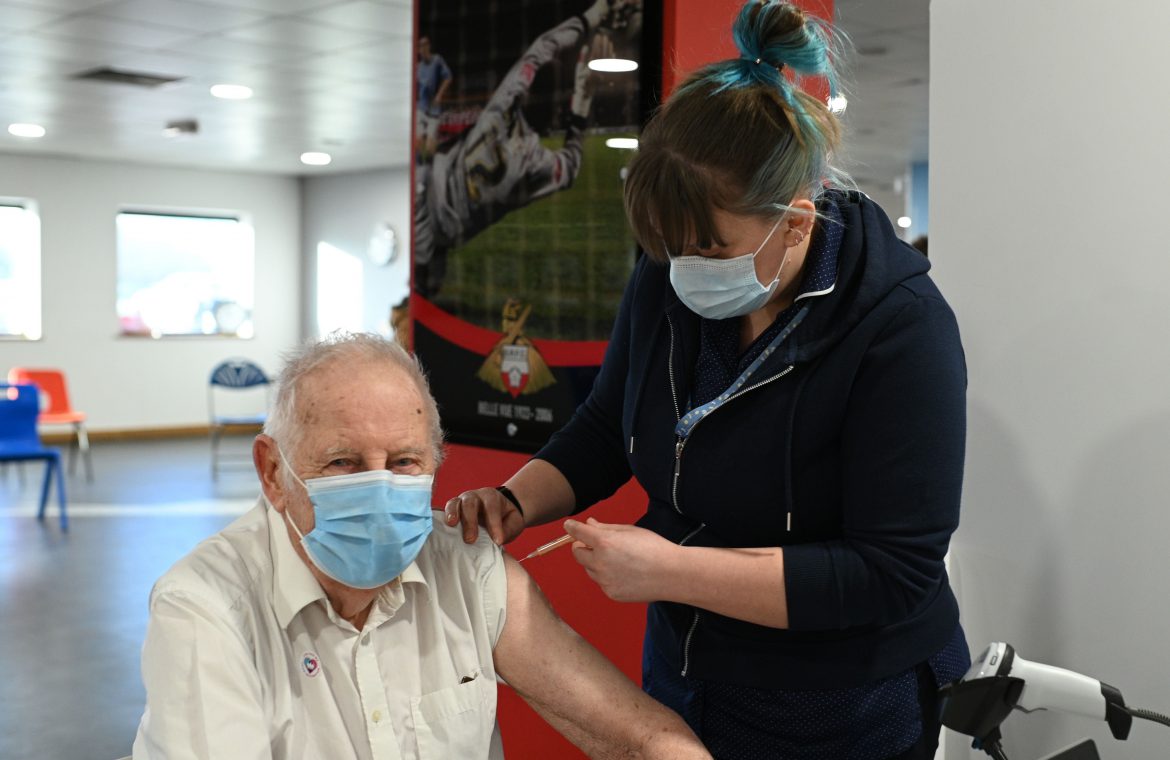 “They are under very close observation, and we have enhanced contact tracing to do everything we possibly can to stop them from spreading,” he told BBC News on Sunday.

It comes as he urged the British public to continue following coronavirus lockdown restrictions and stay at home, warning that any lifting of lockdown rules is a “long, long, long way off” as case numbers were “incredibly high” and the NHS remains under intense pressure.

1611504154Italy to take legal action against Pfizer and AstraZeneca

Italy is launching legal action against drugmakers Pfizer and AstraZeneca over delays in deliveries of Covid-9 vaccines to secure agreed supplies rather than seek damages, the foreign minister has said.

Luigi Di Maio told RAI state television that the Italian government is “working so our vaccine plan programme does not change”.

Asked why he thought the pharmaceutical firms had been forced to announce reductions in supplies, Mr Di Maio said be believed they had bitten off more than they could chew.

“We are activating all channels so the EU Commission does all it can to make these gentlemen respect their contracts,” he added.

Italian prime minister Giuseppe Conte said on Saturday the delays in supplies were “unacceptable” and amounted to a serious breach of contractual obligations.

Transport for London (TfL) will need at least two years of support from the government to be financially stable after its finances have been hit hard by the coronavirus pandemic, an official has said.

The capital’s transport network required a £1.8 billion government bailout in November to keep services running until March this year.

Andy Byford, commissioner of TfL, told BBC’s Politics London show: “TfL absolutely will require additional subsidy for the next year and the year beyond that.

“Obviously, we will do our bit to cut our costs, we have in the past taken a billion pounds off the cost base, there are further savings baked into this financial sustainability plan.

“But the frank or stark reality is that without Government support, and with the chaos that Covid and the decimation on our finances that Covid has wrought, we absolutely will be needing financial support in the short term and we’re making a very strong case to Government to achieve just that.”

Mr Byford also said that Crossrail could be opened sooner than the first half of 2022 as he has “challenged” his team to improve on the deadline.

“I’m not going to nail my colours to an earlier date until I’m certain that that can be achieved,” he said.

“We’ve had too many deadlines that have come and gone in the past, but I am driving the team to achieve the earliest, cheapest, safe possible opening date. So watch this space.”

A coronavirus testing centre in the Dutch village of Urk has been burnt down by an angry mob as the first night of a nationwide curfew came to pass.

The rioters were also accused of destroying police cars and throwing bricks and fireworks at police officers, prompting the mayor to invoke emergency powers and call for riot police.

My colleague Andy Gregory has the details:

Two women who had to be rescued from Ben Lomond on Saturday have been charged with breaching coronavirus lockdown rules.

Both women were from Fife and in their 20s. Lormond Mountain Rescue Team said they called for help after running into difficulty due to poor weather at around 2pm.

They were near the summit of the peak when they called for help. The rescue team helped them walk off the hill, and no injuries were sustained.

Police Scotland said the women were charged in connection with culpable and reckless conduct.

In mainland Scotland, the current rules say people are only permitted to leave home for essential reasons such as work, exercise or to buy essentials. Any outdoor exercise must be carried out within five miles from the boundary of a person’s local authority area.

1611499218Fight for bereavement leave steps up in wake of coronavirus

A new campaign hopes to introduce a legal requirement in the UK for employers to provide time off for anyone mourning the loss of a loved one, and says the coronavirus pandemic has highlighted the need for such a law.

An alliance of charities, pressure groups, cross-party MPs and employers have written to the government calling for two weeks statutory bereavement leaver anyone going through the death of a close relative or partner.

My colleague Colin Drury has the full story:

The PCS union, which represents employees in the civil service and other government bodies, has condemned an outbreak at the UK vehicle licensing agency’s contact centre in Swansea as a “scandal” and called for ministers to intervene.

500 employees at the centre have contracted Covid-19 since the start of the pandemic. A spokesperson for DVLA said safety was a priority and it follow guidance to “help keep our offices Covid secure”.

But PCS general secretary Mark Serwtoka said employees were fearful of entering the workplace in case they caught Covid-19.

He said: “It is a scandal that DVLA are not doing more to reduce numbers in the workplace when Covid infections are on the rise.

“Our members are telling us they are scared to enter the workplace for fear of catching Covid 19.

“Minsters must intervene and ensure DVLA are doing their utmost to enable staff to work from home and temporarily cease non-critical services.”

Wellbeing minister Eluned Morgan told Radio Cymru that the Welsh government had been “worried about the DVLA for a while”.

She said: “It comes up time and again from the people who represent Swansea, and we’re worried the pressure on people working there hasn’t helped.

“The situation is one of the reasons why we’ve introduced new rules, new legislation, to tighten the restrictions on people at work.”

Dubai has slowed down its rollout of the Pfizer/BioNTech coronavirus vaccine after the US pharmaceutical giant announced global shipment delays for up to a month due to works at its main manufacturing plant in Belgium.

The Dubai Health Authority said on Saturday it will scale back on vaccinations, adding that anyone who is scheduled to take their second dose of the vaccine should still show up for their appointments.

The UAE has already vaccinated over two million people, out of a 10 million-strong population, one of the highest rates in the world, reported AFP.

New Zealand has reported its first coronavirus case outside of a quarantine facility in two months, in a 56-year-old woman who recently returned from four months travelling in Spain and the Netherlands.

Director-general of health Ashley Bloomfield said on Sunday that the woman spent 14 days in quarantine and tested negative twice before returning home on 13 January. However, she alter developed mild symptoms and tested positive.

1611492139Teachers have ‘good shout’ at being high on vaccine priority list

Teachers have a “good shout” of being high on the coronavirus vaccine priority list after the most clinically vulnerable, said Matt Hancock.

It comes after the Daily Mail reported of proposals for mass vaccination programmes for education staff over the February half-term.

Mr Hancock said: “It’s not a matter of logistics, the logistics can be organised. The challenge is the supply of vaccine, supply is the rate-limiting factor.

“The question is who should have each dose as it comes in… and we’ve taken the decision, quite rightly, to go through in order of clinical need, starting with those who are most likely to die from this disease.

“Of course we want to break the chains of transmission but we’ve also got to stop people dying from the disease if they catch it.

“We’re going through those who are clinically vulnerable… and after that there’s a perfectly reasonable debate to be had about who should go in what order next.

“Teachers have got a good shout to be very high on the list and those discussions are going on.”