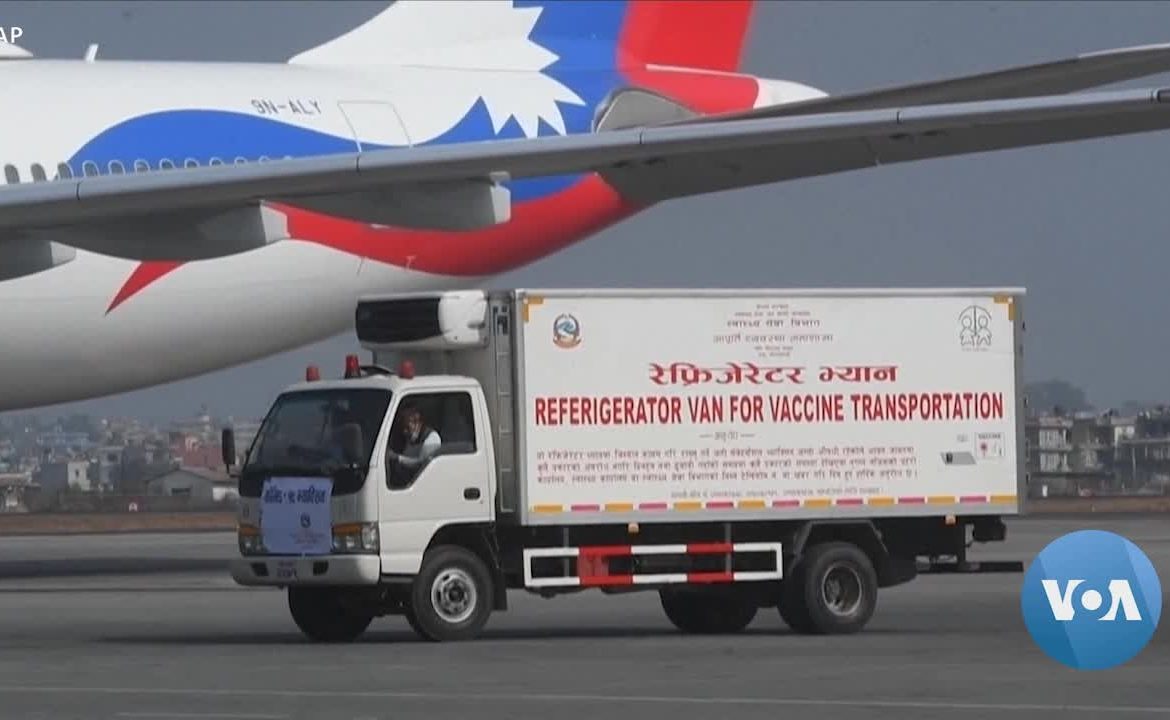 NEW DELHI – In an unusual diplomatic initiative, India has donated millions of doses of the British-developed AstraZeneca COVID-19 vaccine being produced in the country to neighboring South Asian nations.

The “vaccine diplomacy” aims to raise New Delhi’s global profile and push back against China, which has been expanding its influence in South Asia, analysts say.

“It’s about image and soft power. India wants to be recognized as a global leader,” Sreeram Chaulia, dean at the Jindal School of International Affairs, said.

As the world’s largest vaccine producer, India is set to be at the forefront of supplying affordable shots against COVID-19 to low- and middle-income countries. An Indian company, the Serum Institute of India, has joined with AstraZeneca to make the vaccine.

A plane is seen as Myanmar receives the first batch of the coronavirus disease (COVID-19) vaccines from India at Yangon Airport in Yangon, Myanmar, Jan. 22, 2021. (Embassy of India in Myanmar/Handout via Reuters)

The vaccine will be sent to Sri Lanka and Afghanistan after it gets approval in those countries.

However, India’s rival Pakistan, which has approved the AstraZeneca vaccine, is conspicuously absent from the list of recipients.

“As far as Pakistan [is concerned], I am not aware of any request for India-made vaccines,” Indian External Affairs Ministry spokesperson Anurag Srivastava said in response to a query at a regular press briefing.

The low-cost and easily storable AstraZeneca vaccine is in huge demand in developing countries struggling to vaccinate their populations.

New Delhi has given its diplomatic initiative its own hashtag, “VaccineMaitri#” or “Vaccine friendship.” The goodwill gesture comes amid growing criticism of “vaccine inequality” or unequal access to vaccines between rich and developing countries and has won praise from India’s smaller neighbors.

“Friendly nations help each other. India has helped us today with vaccine; just like they forwarded their helping hand in our Liberation War,” said Zahid Maleque, Bangladesh’s health minister.

“A friend in need is a friend indeed,” he said.

As the pandemic puts the spotlight on India as a “vaccine powerhouse,” Prime Minister Narendra Modi has emphasized that it will prioritize South Asian countries in access to vaccine supplies.

“We will continue to give due importance to our Neighborhood First policy while collectively fighting the pandemic,” he said in a recent tweet.

Students wearing face masks to prevent the spread of the coronavirus as they pray upon their arrival at their school, in Karachi, Pakistan, Jan. 18, 2021.

China, too, has given its locally developed vaccines to countries such as Indonesia and Turkey, and promised it to many others across Africa, Asia and South America.

However, South Asian countries such as Nepal, Bangladesh and Sri Lanka had asked India for supplies of the AstraZeneca vaccine, developed in Britain.

“India would like to make a point that in this area, unlike in some others where China usually overshadows India in terms of military and economic might, in this field, in pharmaceuticals, in affordable health care, India has actually a comparative edge and advantage over China,” Chaulia said.

“That will be a subtle message going around that you can depend on us, that we did not create the problem but we will be part of the solution,” he said.

New Delhi has also started commercial shipments of vaccines — the first consignments have landed in Brazil and Morocco and are also set to go to South Africa and Saudi Arabia.

“Keeping in view the domestic requirements of the phased rollout, India will continue to supply vaccines to partner countries in the coming weeks and months in a phased manner,” Srivastava said.

Modi has said that India will play a frontline role in providing vaccines — both AstraZeneca’s and another one developed by an Indian company that also has been approved for emergency use.

“Today India, with not one but two made in India vaccines, is ready to protect humanity,” Modi told a virtual convention of nonresident Indians earlier this month.

“Being pharmacy of the world, India has supplied essential medicines to the needy across the globe in the past and is doing it today as well,” he said.

In recent months, Indian companies have been ramping up production to meet the unprecedented demand for COVID-19 vaccines. The Serum Institute of India has already stockpiled 80 million doses of the AstraZeneca vaccine and is churning out 50 million doses a month. Some of those vaccines will also be provided to the World Health Organization-backed COVAX initiative to give vaccines to poor countries.

While inoculation programs are underway in rich countries, developing countries are struggling to secure supplies and begin vaccinating their people. WHO Director General Tedros Adhanom Ghebreyesus recently said that the world is “on the brink of a moral catastrophic failure” for its unequal sharing of COVID-19 vaccinations and warned that a “me-first approach” in distributing vaccines “will only prolong the pandemic.”

Don't Miss it 2 in 5 Americans live where COVID-19 strains hospital ICUs
Up Next COVID-19 has devastated an already beleaguered live music scene in Toronto. Can it recover?