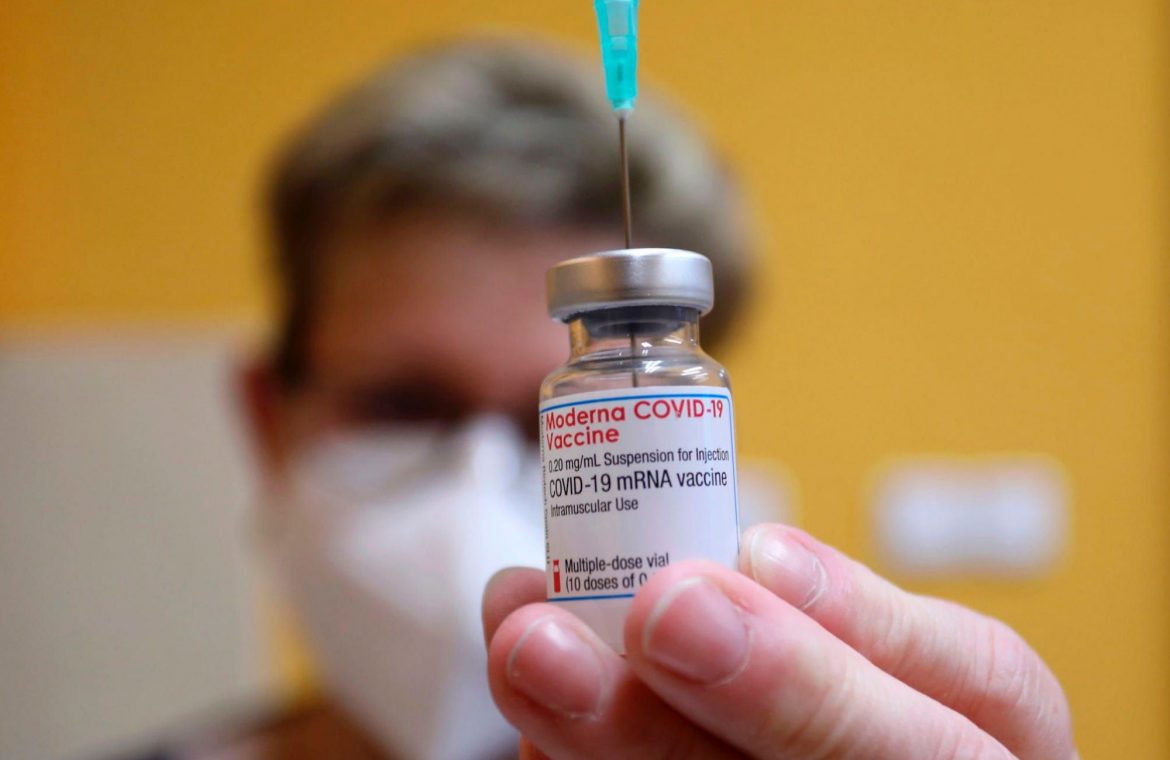 Moderna’s COVID-19 vaccine is one of two that have been authorized for emergency use to fight the pandemic across the US. The other vaccine available is from Pfizer. Radek Mica /AFP via Getty Images

Moderna said its current coronavirus shot can probably protect people against variants of the disease first found in South Africa and the UK.

But the shot showed lower levels of antibodies in lab testing against the South African variant.

Moderna is now developing a new version of its vaccine tailored to that viral strain.

Moderna’s coronavirus vaccine is likely still protective against a viral strain first found in South Africa, but the Massachusetts biotech said Monday it plans to soon start testing a booster shot tailored to protect people against that variant.

Moderna’s two-dose COVID-19 vaccine won US authorization in December and has since been rolled out to millions of people. A large-scale study last year found the shot was overwhelmingly protective against COVID-19, being about 94% effective at preventing symptomatic disease.

Read more: More than 200 coronavirus vaccines are still in development as the initial vaccine rollout ramps up. Here’s how experts anticipate 2021 playing out.

But infectious-disease experts have grown increasingly concerned with the recent rise of several variants, in particular a strain first identified in South Africa. That version of the virus has 10 mutations in the spike protein, which is the target of the leading COVID-19 vaccines, including Moderna’s.

New lab research from Moderna and its partner scientists at the US National Institutes of Health found the shot generated less of an immune response against the South African strain. That research hasn’t been published yet in a medical journal, but Moderna said it believes the shot is still protective, at least in the short-term.

“However, we really need to make sure that we begin, and we already have, to prepare, if it’s necessary, to upgrade the vaccines,” Fauci added.

Moderna’s shot showed a six-fold reduction in neutralizing antibodies – the viral-killing proteins that play a critical role in the immune system – against the South African variant compared to other variants, the company said.

“These lower titers may suggest a potential risk of earlier waning of immunity to the new B.1.351 strains,” Moderna stated in a Monday press release, referring to the South African strain by its scientific name.

Given the results, Moderna will soon start additional clinical trials. This research will test giving another booster shot of its current vaccine, as well as a booster shot tailor-made to neutralize the South African variant.

Moderna CEO Stéphane Bancel said the biotech was starting the new program “out of an abundance of caution.”

Regulatory pathway is unclear but likely to be significantly shorter

It’s unclear when the human research would start, as Moderna said the variant-specific vaccine still needs to go through some preclinical testing.

Read more: Moderna’s ambitions of pumping out up to 1 billion doses of a coronavirus vaccine rest on a former Polaroid factory that’s never produced an approved drug

Experts say that Moderna will need to run a new clinical trial of the booster shot before regulators will allow its use.

However, that almost certainly won’t require running another 30,000-person study that supported the December authorization. Instead, a booster study is likely to be something closer to Moderna’s 45-person Phase 1 trial that will test whether the new shot creates an immune system response. Moderna started that study last March and released initial data by mid-May.

For decades, flu vaccine developers have tweaked their products as new strains emerge. Drugmakers generally run a small immune response test in humans and present that data, along with Phase 3 data that showed the previous version of the vaccine worked, to the Food and Drug Administration.

It’s not a given, however. Bancel acknowledged the ultimate decision rests with the FDA. Many influenza vaccines use tried-and-true scientific approaches, while both Moderna and Pfizer’s COVID-19 vaccines are the first messenger RNA products to hit the market in the US.

“There are decades of experience with influenza vaccines and the platforms used to develop and assess the efficacy of these products.” David Morse, a former FDA pharmacologist and vice president of global regulatory affairs at ICON, told Insider. “Whether the influenza procedures can safely be leveraged in the coronavirus milieu is as yet unknown.”

The fact that so little is understood about the novel coronavirus, its variants and what level of antibodies are needed to protect a person could also complicate the process, according to Parexel Vice President Briget Heelan, who previously worked in Europe’s regulatory agency.

Much more is known about influenza, she said, making COVID-19 a different scenario that will require people in the drug industry to learn as they go.