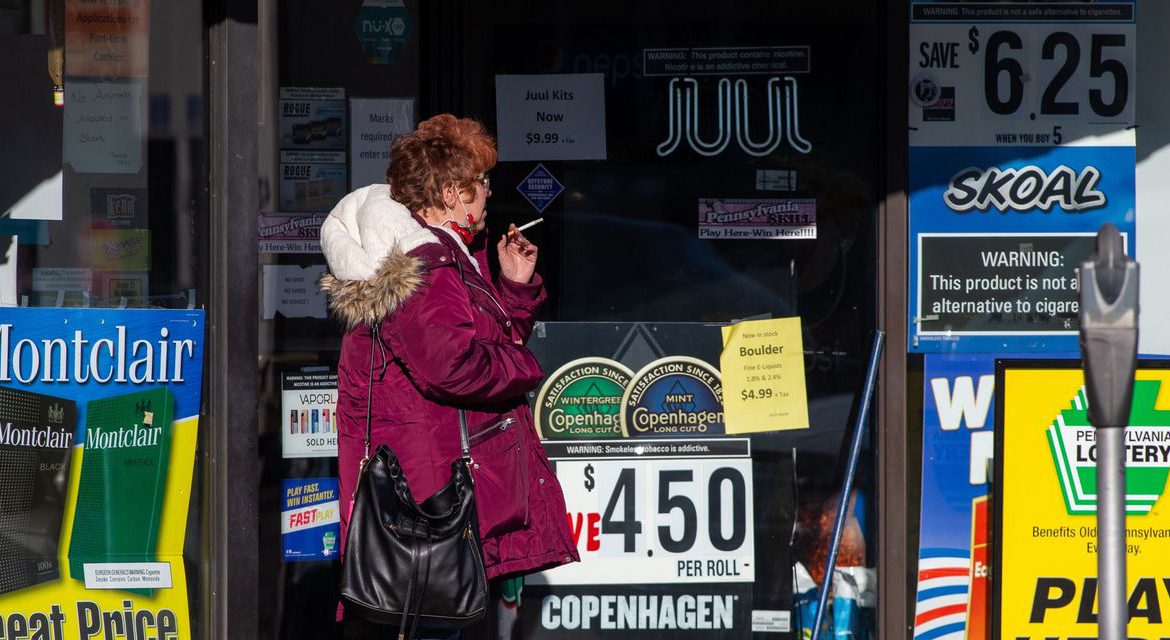 The decadeslong decline in U.S. cigarette sales halted last year as people in lockdown lit up more frequently and health concerns around e-cigarettes caused some vapers to switch back to cigarettes.

Before the pandemic, U.S. cigarette unit sales had been falling at an accelerating rate, hitting 5.5% in 2019, as smokers quit or switched to alternatives like e-cigarettes. The pandemic put the brakes on that slide. In 2020, the U.S. cigarette industry’s unit sales were flat compared to the previous year, according to data released Thursday by Marlboro maker

People had more opportunities to smoke because they spent more time at home and had more money to spend on cigarettes because they spent less on gas, travel and entertainment, Altria said. At the same time, some e-cigarette users turned back to combustible cigarettes because of increased e-cigarette taxes, bans on flavored vaping products and confusion about the health effects of vaping, consumers and industry officials say.

U.S. cigarette sales were even stronger last year than they were in 2015, when many consumers switched back to cigarettes after trying first-generation vaping devices. Those early products didn’t deliver nicotine effectively enough to satisfy some addicted cigarette smokers. But e-cigarette sales took off again in 2017, spurred by the popularity of a new vaporizer called Juul.

E-cigarette sales were booming in the fall of 2019 when the U.S. Centers for Disease Control and Prevention, investigating an outbreak of a mysterious lung illness, warned consumers not to use any vaping products. Sales took a nosedive. The illness later was linked to vitamin E oil in marijuana vaping products, but the public’s perception of e-cigarette safety hasn’t rebounded and neither have sales.

In 2017, Juul catapulted to the top of the e-cigarette market. But the company’s valuation has fallen just as quickly, as a series of crises have led to hundreds of lawsuits alleging that the company marketed its products to teens. Photo Illustration: Jacob Reynolds/WSJ

a software developer in San Antonio, gave up Marlboros for e-cigarettes around 2018 and switched back to cigarettes in late 2019.

“Trust the devil you know,” said Mr. Kunbargi, who is 28. “I keep smoking, it’s going to give me cancer. Whereas vaping is much more uncharted territory.”

Working at home with a laptop outside on his front patio during the pandemic, he said, he is smoking more than he did before—as many 10 cigarettes a day.

Public health officials say that while e-cigarette use isn’t risk-free, it poses significantly less risk than cigarette smoking, which is associated with more than 480,000 deaths in the U.S. each year. Yet according to a Euromonitor survey in early 2020, 73% of U.S. respondents said vaping products were as harmful or more harmful than cigarettes. Euromonitor reported that public perceptions of e-cigarette safety worsened in all 20 of the countries it surveyed.

“This weakness was undoubtedly a factor in the relative robustness of cigarette volumes in 2020,” the research firm said.

Adults using e-cigarettes as an alternative to cigarettes shouldn’t go back to smoking, said

a deputy director of the CDC’s Office on Smoking and Health and a senior official involved in the agency’s vaping-related illness response. Those people should consider using FDA-approved smoking cessation medications, and if they choose to use e-cigarettes, they should switch completely from cigarettes, he added.

During the lung-illness investigation, the CDC promptly shared the latest data with the public and refined its recommendations based on available scientific evidence, Dr. King said. The CDC now recommends that people avoid vaping products containing THC, the psychoactive ingredient in marijuana, particularly from informal sources like friends, family, or in-person or online dealers.

Other adult smokers said in interviews that restrictions on fruity and minty e-cigarette flavors have nudged them back to cigarettes.

Seeking to curb an uptick in underage vaping, federal legislation in 2020 raised the legal tobacco purchase age to 21 and the Food and Drug Administration took some sweet and mint-flavored e-cigarette refill cartridges off the market.

Those measures appear to have worked. In a federal survey conducted between January and March of 2020, 19.6% of high-school students said they had vaped in the past 30 days, compared with 27.5% in the same period a year earlier. But vaping also declined among adults. The number of vapers 21 years or older in the U.S. fell to 9.8 million last year from 11.8 million in 2019, according to Altria’s estimates.

An FDA spokeswoman said changes in tobacco consumption couldn’t be attributed to a single policy, event or piece of legislation. She noted that adult consumers still had access to flavored vaping products like disposable e-cigarettes and tank systems.

“Covid-19 has created a drastic change in daily life, including increased stress and anxiety, that may contribute to a smaller-than-expected reduction in cigarette sales,” she said. She added that because cigarette smoking increases the risk of more severe illness with Covid-19, “There has never been a better time to try to quit.”

Altria, the biggest U.S. tobacco company, reported that sales rose 4.9% to $6.3 billion in the quarter ended Dec. 31 from $6.0 billion a year earlier. Its revenue from cigarettes and cigars was $5.6 billion.

E-cigarette market leader Juul Labs Inc. reported $1.9 billion in sales in the first nine months of 2019. The CDC in September that of year warned people not to vape, and Juul later that autumn voluntarily stopped selling its sweet and mint-flavored refill pods in anticipation of federal flavor restrictions. The company’s revenue dropped to $1.1 billion in the first nine months of 2020 and was an estimated $340 million in the last quarter of the year. Altria holds a 35% stake in Juul.

Write to Jennifer Maloney at jennifer.maloney@wsj.com