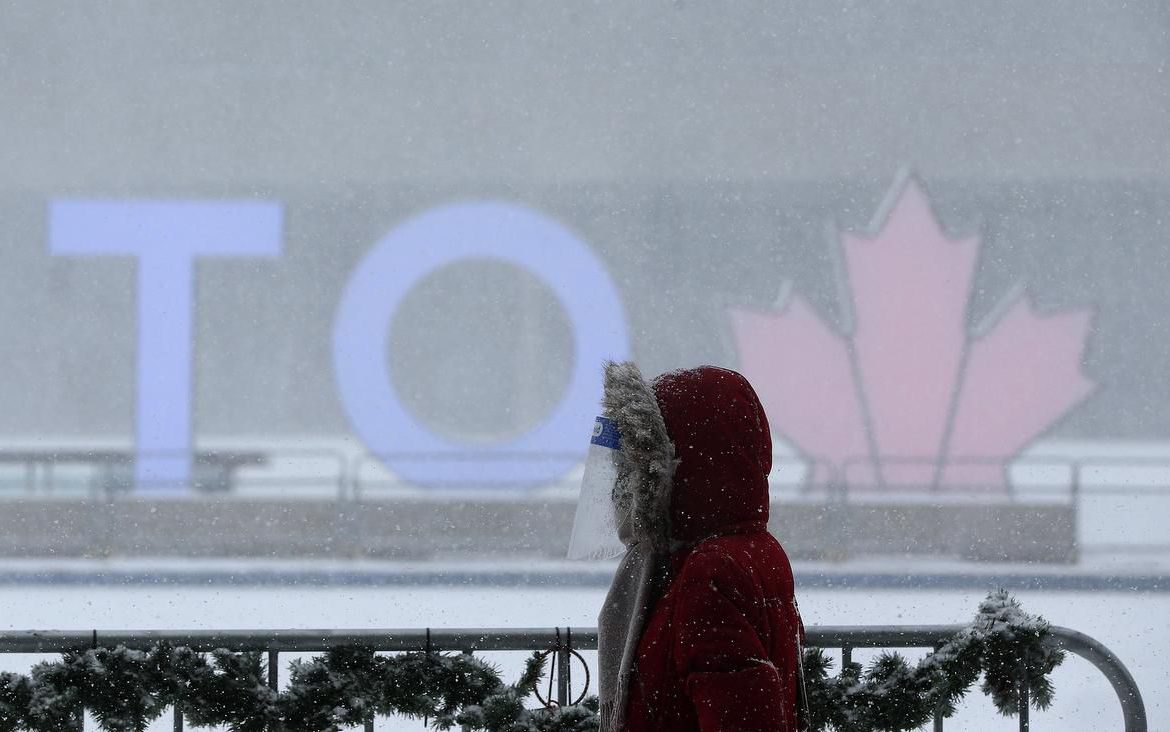 4 p.m. Two Toronto-area retirement homes imposed restrictions on visitors coming from an Ontario region at the centre of a more potent COVID-19 outbreak over the weekend as officials in another district said the more contagious U.K. virus variant had surfaced there as well.

Shannex Inc,. confirmed Sunday that its two retirement facilities in Toronto and neighbouring Mississauga, Ont., are barring visitors from communities deemed “high alert” as part of a slate of infection control efforts.

“These new measures are extra precautions we must take in our battle to keep COVID-19 out of our buildings, particularly as we see the new variant in our province,” Shannex communications manager Gillian Costello said in a Sunday statement.

The restriction is currently limited to visitors from Barrie, Ont., because of the rising number of U.K. variant cases there, Costello said. Barrie has become the epicentre of the latest phase of the COVID-19 pandemic after confirming the more contagious U.K. virus variant was the cause of a deadly outbreak at a local long-term care facility.

The sobering figure emerged this morning after Quebec reported 31 new fatalities related to the virus.

Canada has now recorded 20,016 deaths since the first case of COVID-19 surfaced in the country just over a year ago.

An average of 138 people with COVID-19 have died each day over the past week.

But she’s warned that it’s still too soon to lift widespread public health restrictions, saying the virus is still spreading rapidly across parts of the country.

Due to a data catch-up, Toronto Public Health is reporting approximately 300 additional cases today, resulting in an overestimate of the daily count.

There have been 339,644 doses of the vaccine administered as of yesterday at 8 p.m.

In long term care homes, the number of residents who reported positive for the virus reached 89 and 71 for staff. As of Sunday, 13 more residents have died from the virus.

9:45 a.m.: Officials say the first case of a more infectious new strain of COVID-19 detected in the Waterloo, Ont., region is connected to an outbreak at a long-term-care home.

A Region of Waterloo Public Health investigation has traced the patient to another person who travelled internationally.

The region says it expects more cases to emerge as Public Health Ontario completes more tests for the variant.

It’s also confirmed that the variant case is connected to a COVID-19 outbreak declared at Columbia Forest long-term-care home late in December.

Provincial officials have said the B.1.1.7 variant, which first emerged in the U.K. last year, is more contagious and may cause more severe illness.

Public Health Ontario has confirmed 57 cases of the variant in the province and regional health officials have said they suspect the number is higher.

8:30 a.m.: Four of Canada’s major airlines have suspended service to Mexico and the Caribbean as of today.

Prime Minister Justin Trudeau announced Friday that Air Canada, WestJet, Sunwing and Air Transat had agreed to the measure in an effort to slow the spread of COVID-19.

The restriction will last until April 30, and Trudeau says the airlines will help arrange the return of customers currently on a trip.

It’s one of a suite of new government measures aimed at preventing Canadians from travelling abroad in the doldrums of February and throughout spring break.

For instance, starting first thing Thursday, all international passenger flights must land at only four airports – in Vancouver, Toronto, Calgary, and Montreal.

And in the coming weeks, all air travellers arriving in Canada will have to stay at a government-approved hotel for three nights and take a COVID-19 test — all at their own cost.

8:30 a.m.: Staff in intensive care units across Greater Toronto have been working flat out for months, keeping up the gruelling pace of caring for the sickest COVID-19 patients with few signs of a slowdown on the horizon.

New provincial modelling presented Thursday shows while COVID-19 case counts are dropping due to stay-at-home orders, ICUs will continue to face crushing pressures well into February. On Jan. 24, half of all Ontario hospitals had only one or two empty critical care beds, and 35 per cent had no free ICU beds; almost all swamped intensive care units are in the GTA.

Even with the lockdown creating a potential downward trajectory in critically ill COVID-19 patients — and if more infectious COVID variants can be kept at bay — Ontario recently passed yet another bleak pandemic milestone: More critically ill patients with the virus have died in ICUs in the second wave than in the first.

A fraction of the 6,000-plus COVID-19 deaths in Ontario have taken place in an ICU. Since the start of the pandemic, 1,034 severely ill patients with COVID-19 have died in ICUs, with 618 of those deaths coming after Sept. 1, according to the most recent weekly report from Critical Care Services Ontario.

Read the full story from the Star’s Megan Ogilvie here.

8:25 a.m.: Torontonians have been prolific complainers about their fellow citizens not following lockdown rules, data from the city’s 311 hotline shows.

But few of those calls appear to have led to enforcement or even warnings to alleged rule-breakers, including hundreds of complaints about people not wearing masks in the common areas of apartments and condos.

Between April 1 and Dec. 21, the city received 50,986 COVID-19-related complaints, data reviewed by the Star shows.

Read the full story from the Star’s Jennifer Pagliaro and Celina Gallardo here.

The country’s vice health minister on Sunday pleaded with people to stay home during the holidays as he announced the government decision to extend a clampdown on private social gatherings of five or more people through the end of the holiday on Feb. 14.

The government will also maintain restrictions on indoor dining in the Seoul metropolitan area for another two weeks, requiring restaurants to provide only deliveries and take out after 9 p.m. South Korea reported another new 355 cases on Sunday.

8:19 a.m.: China recorded more than 2,000 new domestic cases of COVID-19 in January, the highest monthly total since the tail end of the initial outbreak in Wuhan in March of last year.

The National Health Commission said Sunday that 2,016 cases were reported from Jan. 1-30. That does not include another 435 infected people who arrived from abroad. The tally for Jan. 31 is due to be released Monday.

Two people have died in January, the first reported coronavirus deaths in China in several months.

Most of the new cases have been in three northern provinces. Hardest-hit Hebei province, which borders Beijing, has reported more than 900 cases. Beijing, the Chinese capital, has had 45 cases this month.

The numbers, while low compared to many other countries, have prompted officials to tighten restrictions and strongly discourage people from travelling during the upcoming Lunar New Year, a major holiday when people typically return home for family reunions.

Train trips were down nearly 75 per cent in the first three days of the holiday travel season, the official Xinhua News Agency said Sunday, citing the state railway company. The Lunar New Year falls on Feb. 12.

It is the first time that Israel has confirmed the transfer of vaccines to the Palestinians.

Israel has come under criticism from U.N. officials and human rights groups for not providing vaccines to the Palestinians. Israel says it is not responsible.

Israel is one of the world’s leaders in vaccinating its population after striking procurement deals with international drug giants Pfizer and Moderna.

The Palestinians have not begun to vaccine their people.

8:15 a.m.: A World Health Organization team looking into the origins of the coronavirus pandemic on Sunday visited the food market in the Chinese city of Wuhan that was linked to many early infections.

The team members visited the Huanan Seafood Market for about an hour in the afternoon, and one of them flashed a thumbs-up sign when reporters asked how the trip was going.

The market was the site of a December 2019 outbreak of the virus. Scientists initially suspected the virus came from wild animals sold in the market. The market has since been largely ruled out but it could provide hints to how the virus spread so widely.

“Very important site visits today — a wholesale market first & Huanan Seafood Market just now,” Peter Daszak, a zoologist with the U.S. group EcoHealth Alliance and a member of the WHO team, said in a tweet. “Very informative & critical for our joint teams to understand the epidemiology of COVID as it started to spread at the end of 2019.”

Earlier in the day, the team members were also seen walking through sections of the Baishazhou market — one of the largest wet markets in Wuhan — surrounded by a large entourage of Chinese officials and representatives. The market was the food distribution centre for Wuhan during the city’s 76-day lockdown last year.

8 a.m.: Researchers around the world are trying to unravel the mystery of so-called long COVID to help patients afflicted with an assortment of debilitating symptoms, though they are typically excluded from statistics related to COVID-19 or considered recovered. Some were diagnosed with COVID-19 by their family doctors based on symptoms, not a positive test, in the early days of the pandemic when testing was not offered widely.

Read the full story from the Canadian Press.

Don't Miss it Coronavirus | India to come out of COVID-19 pandemic as one of the global winners: Danish envoy
Up Next Another new vaccine is said to be 88% effective against severe Covid – BBC News