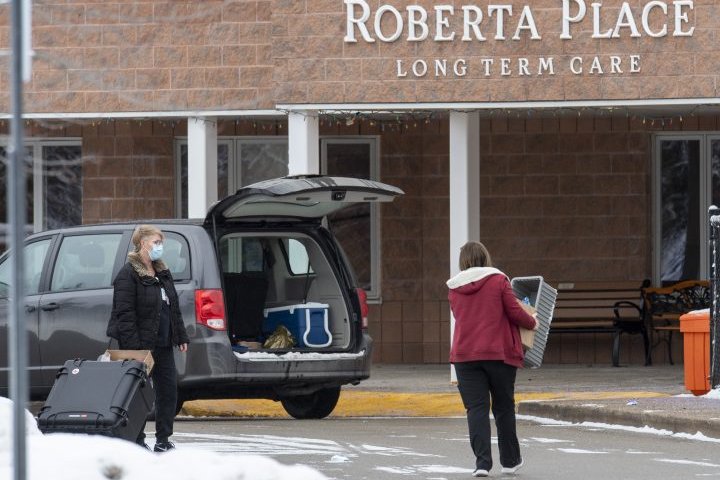 Two Toronto-area retirement homes imposed restrictions on visitors coming from an Ontario region at the centre of a more potent COVID-19 outbreak over the weekend as officials in another district said the more contagious U.K. virus variant had surfaced there as well.

Shannex Inc,. confirmed Sunday that its two retirement facilities in Toronto and neighbouring Mississauga are barring visitors from communities deemed “high alert” as part of a slate of infection control efforts.

“These new measures are extra precautions we must take in our battle to keep COVID-19 out of our buildings, particularly as we see the new variant in our province,” Shannex communications manager Gillian Costello said in a Sunday statement.

The restriction is currently limited to visitors from Barrie, Ont., because of the rising number of U.K. variant cases there, Costello said. Barrie has become the epicentre of the latest phase of the COVID-19 pandemic after confirming the more contagious U.K. virus variant was the cause of a deadly outbreak at a local long-term care facility.


Meanwhile, a Region of Waterloo Public Health investigation had linked the first local case of the variant to another person who travelled internationally as well as a local long-term care home outbreak, the municipality said Saturday.

“We do expect further cases will be identified as more variant testing is completed by Public Health Ontario,” the statement read.

Public health officials have said the B.1.1.7 variant was behind the deadly outbreak at Roberta Place in Barrie, where the virus has claimed at least 46 lives and infected more than 200 people.

The region’s top doctor has said he’s confident all cases in the outbreak are the result of the U.K. variant. It’s also been linked to outbreaks at a hospital and another care home in the area.

Provincial data as of Sunday reported fewer than five cases among staff and residents at the facility, where the outbreak is still considered active.

The first case of B.1.1.7 in the Waterloo area was identified on Friday, with public health noting that the woman’s illness is considered resolved.

The region’s top doctor said the arrival of the variant is not unexpected given confirmation of its presence elsewhere in the province. Dr. Hsiu-Li Wang said continued adherence to public health guidance is still the best defense against the virus.

“What this means for Waterloo Region is that we must not let up our guard with respect to public health measures. What we have been doing are the same measures we need to employ against this variant,” Wang said in a statement.

Provincial officials have said the variant, which first emerged in the U.K. last year, is more contagious and may cause more severe illness.

Public Health Ontario had confirmed 58 cases of the variant in the province Sunday as it continued to ramp up genomic testing for B.1.1.7 and two other COVID-19 strains deemed “variants of concern.”

Haldimand-Norfolk was added to the list of health units with a confirmed case of the U.K. variant on Sunday.

Only the U.K. variant has been confirmed in Ontario, and a number of regional health officials have said they suspect the number of such cases is higher than the current total.

Toronto’s medical officer of health said last week that restricting travel between regions to control the spread of the variant is “worth considering,” but noted much would depend on what ongoing research uncovers about the virus variants.

Ontario reported 1,848 more cases of COVID-19 and 43 additional deaths from the virus on Sunday.

A data catchup at Toronto Public Health likely inflated the daily total by about 300 cases, according to Health Minister Christine Elliott.

The province reported 1,159 people were hospitalized with the virus as of Sunday.

Of those patients, 356 were in intensive care and 252 were on ventilators.

The province said 2,816 COVID-19 vaccine doses were administered since the last daily update, for a total of 339,644 administered across the province.

Don't Miss it COVID-19: NHS Test and Trace ‘unaffected’ by cyber attack at Serco, firm says | Science & Tech News
Up Next Stories from those who lost loved ones to COVID-19 – 60 Minutes