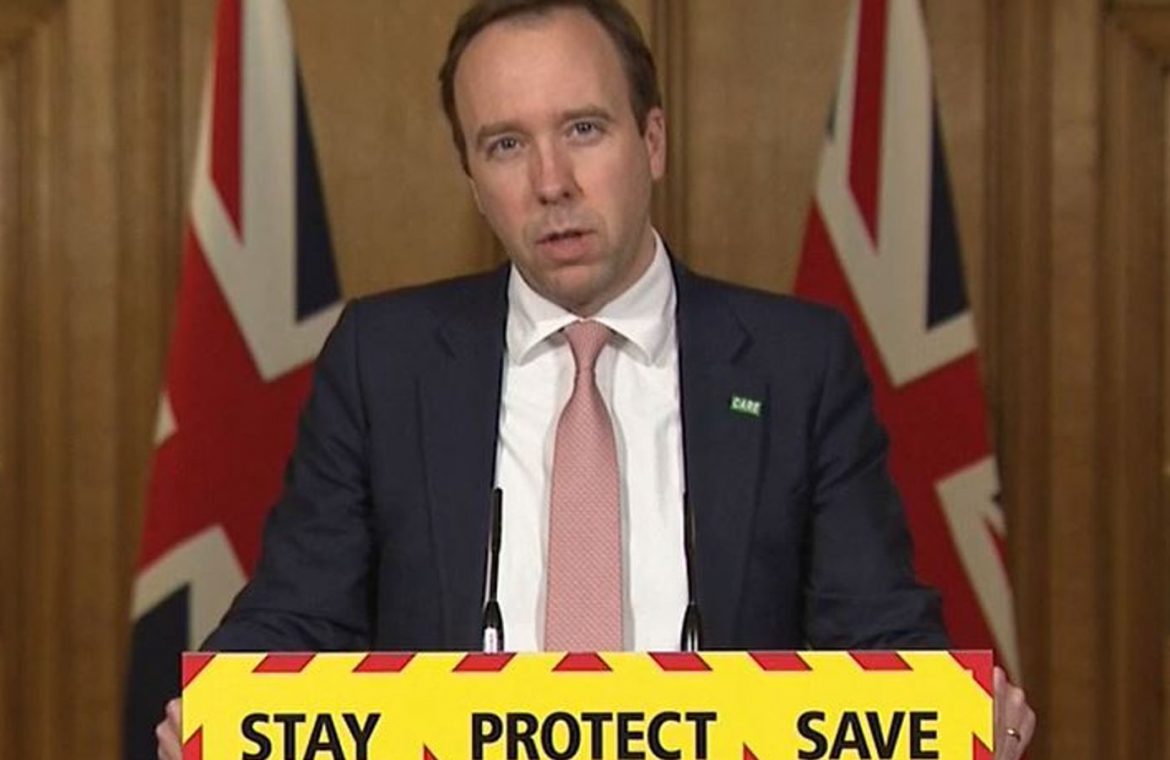 It is “absolutely vital” that people in areas of England where the South African variant of coronavirus has been identified minimise all social contact, the health secretary has said.

Speaking at the Downing Street news conference after it was revealed that 105 cases of the COVID-19 variant have been identified in the UK, Matt Hancock said there “may be further cases we don’t know about yet”.

The government has announced that coronavirus testers will go door-to-door across a number of areas of England to swab 80,000 people in an attempt to halt the spread of the strain.

The emergence of the variant was a “stark reminder the fight against this virus is not over yet” and that now was “no time to let things slip”, Mr Hancock said.

“There is currently no evidence to suggest this variant is any more severe. But we need to come down hard on it and we will,” he added.

Of the 105 cases, 11 of them identified over the last five or six days do not appear to have links to international travel, which suggests there may be pockets of spread in local communities.

As a result, household testing will be rolled out across a number of areas, with “surge testing” taking place in:

Mr Hancock said it was “imperative” that people in these areas stay at home and take a test when it is offered to them, even if they have no symptoms.

“The most important thing is that people in the postcode areas outlined need to take extra special precautions,” the health secretary said.

“It is absolutely vital that people in those areas minimise all social contact and get a test when the opportunity arises.

Mr Hancock added that “finding every single case” of the variant was the government’s aim.

He did not explicitly rule out the prospect of tougher measures in areas with cases of the variant, saying “we’re always looking at what we need to do” and “further measures are always there”.

But the health secretary added: “We already have this very strong set of rules, indeed very strong laws in place, against people travelling unnecessarily, unless that travel is essential.

“So what I’d say is that if you’re in one of the postcode areas I’ve set out, if you’re in an area where the new variant has been found, then stay at home and let’s get this new variant totally under control.”

“We’re confident that all the vaccines we’re using provide a high degree of immunity and protection against all variants,” he said.

“The interesting and exciting thing about… the vaccines we’re developing is increasingly, they’re capable of being adapted to deal with new variants as they arise.”

Echoing Mr Hancock, Dr Susan Hopkins from Public Health England told the briefing there was no evidence at this stage that the South African variant resulted in a more serious disease in those infected.

She also said there was no evidence that the cases of the variant were linked.

Dr Hopkins noted they had been discovered in “quite separate parts of the country” and said they were “more likely to be related to somebody who potentially had asymptomatic infection when they came in from abroad”.

She added: “We are looking to find extra cases in the community to see where we can find links and to try and close down and eliminate the transmission between people.”

Turning to the potential effect of the variant on existing vaccines, Dr Hopkins said trials had shown that three vaccines are effective against it.

“We expect all other vaccines to have a similar level of effectiveness, particularly in reducing hospitalisation and death,” she said.

She added that further testing was being carried out so that such predictions could be made with “greater robustness”.

Dr Hopkins said experts were looking at whether those have already received a COVID jab would need another shot to cover the risk posed by new mutations of the virus.

“It is unlikely that people would have to start [the vaccine treatment] again, it is much more likely that it would be a booster shot – a bit like the annual flu vaccine,” she said.

As well as speaking at length about the South African variant, the health secretary also provided an update on the UK’s vaccine rollout.

Mr Hancock said 9.2 million people have now received a first dose of a COVID vaccine, including almost nine in 10 of all those aged over 80 and more than half of those in their 70s.