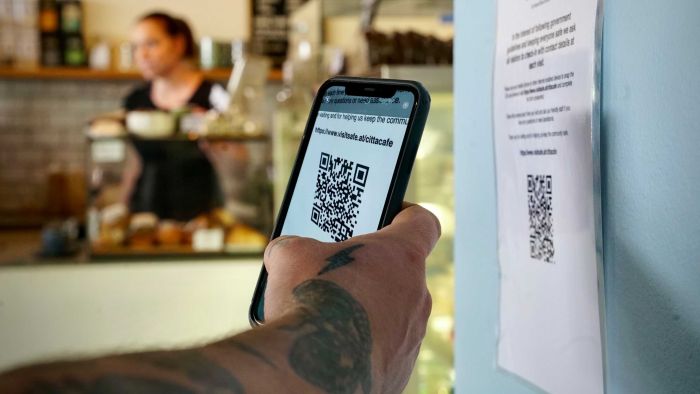 An idea that South Australia’s contact tracing program could continue after COVID-19 passes has seemingly garnered little support among politicians and the public, with some calling for it to be “nipped in the bud”.

SA chief public health officer Nicola Spurrier was on the weekend quoted saying she would like to see the state’s QR code regime, which requires people to register when entering public places, continue as a safety net against future pandemics.

With Professor Spurrier unavailable to elaborate, her deputy, Emily Kirkpatrick, told ABC Radio Adelaide that QR codes had been “vital” in fighting the pandemic.

“It’s certainly very important over the next 12 months that we do maintain the QR code, however, there’s always that fear and threat of future pandemics and future outbreaks,” she said.

“What we have seen here is how effective the QR codes can be at being able to quickly contact trace people, and we’ve seen that from lessons learnt overseas and interstate as well.

“So certainly, I’m very much in favour of keeping codes, but they need to be there for a particular purpose in fighting the pandemic.”

What happens to your QR code data?

Millions of Australians visiting cafes, restaurants and pubs are unwittingly entering their COVID check-in details into platforms owned by marketing companies. Now privacy and cybersecurity experts are sounding the alarm.

Read more’Nip it in the bud’

Liberal senator for South Australia Alex Antic said the suggestion was a “thought bubble” that needed to be “nipped in the bud early”.

He said the SA Parliament about 12 months ago enacted the COVID-19 Emergency Response Act 2020, which paved the way to give some “pretty extraordinary, sweeping powers to public bureaucrats”.

“I think South Australians have been very patient for good reason as a lot of these things have been very helpful, I think, in terms of managing the pandemic,” Senator Antic said.

However, he said QR codes were an impost on small businesses and pointed out that at shopping malls people were required to sign in repeatedly at various outlets.

Senator Antic said South Australians had largely accepted the inconvenience because there was “an end in sight”, but adopting QR codes for “time immemorial” could encourage people to simply avoid malls and shop online.

“The last period has seen enormous wealth go from small businesses, which are doing it tough, into the pockets of the likes of [CEO] Jeff Bezos from Amazon,” he said.

Scanning a QR code with your phone’s camera in SA will direct you to this website.(ABC Radio Adelaide: Malcolm Sutton)Read more about coronavirus:No support for long-term use

There has been no suggestion by elected members of government that QR codes would be retained once the COVID-19 pandemic is over.

Earlier this year, Police Commissioner Grant Stevens also reassured the public that they would not remain in place beyond their original purpose.

Senator Antic said there was a libertarian argument about being tracked and people did not “really like that”.

“We saw in the US with their Homeland Security Act that sometimes in times of crisis the bureaucracy gets used to powers and holding on to them,” he said.

“I think we have to be very careful and very considered about rolling them back as soon as we can … when the time is safe and it’s reasonable to do so.”

ABC Radio Adelaide listeners were quick to rally against the idea on its text line, although the permanent tracking of individuals did get some support:

“I think the code should be kept. It is a real concern the number of people still not using them. Supermarkets and shopping centres need guards at their entrances. It is a very small inconvenience to use the code and a great way to try and keep us safe.” — Jan.

“How about inserting an RFID chip into every newborn child, this would keep a track of everyone, which could lead to less crimes and so on.” — Kit.

The vast majority, however, wanted QR codes to be turfed once their original intent was no longer necessary.

“I don’t have anything to hide but I certainly don’t need to be tracked either.” — Anonymous.

“It’s a disincentive to passing a retail business and just dropping in to have a quick look at something, particularly in shopping centres. And it is a bit of a pain to go from the supermarket to the newsagent to the post office to the pharmacy to do your shopping and remember to check in at each one. Necessary for now but not forever, please.” — Marie.

“I’m a big privacy advocate and I’ve been OK with logging businesses I visit. But this push to keep them forever? Yeah, completely off them now. ‘How to crush public goodwill in one thought bubble’.” — Anonymous.