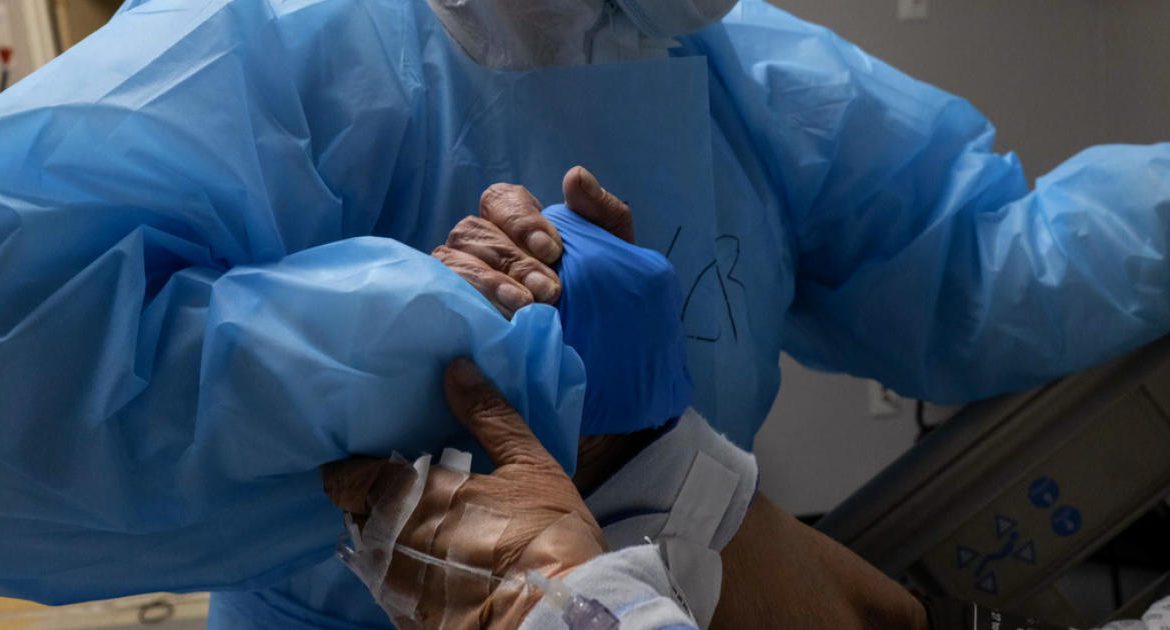 The Biden administration has a new goal of inoculating nearly all Americans against COVID-19 by the end of summer. To that end, last week, the U.S. ordered an additional 200 million vaccine doses. This month marks the anniversary of COVID in America. Last year on January 31, there were eight confirmed cases. Now, it’s 26 million. A year ago, there were no reported deaths. But today, nearly 450,000 Americans are gone. As vast as these numbers are, there is a third, even larger group of pandemic sufferers. They are the bereaved, the family members left behind. They did not die, but they lost their lives—the lives they had so carefully planned.

Tim Branscomb opened a tiny box and released a cheer. On a cruise, in September 2019, Lauren Thomas collapsed into his arms, in part, because he actually did get the ring, she sent him in a picture.

Lauren Thomas: And I sent him screenshots just messin’ with him, like, “You know, if you ever want to propose, like, these are rings that I like.”

Scott Pelley: How did you meet?

Lauren Thomas: We actually met in high school. He was always looking for me, and I was always running the other way. Later on, we reconnected on Facebook. And I realized, like, ok, you know.

But last April, when doctors were struggling to understand treatment, the big man fell hard after six days in the hospital.

Lauren Thomas: I got a call. And it was a doctor, and I just heard, like, all these, like, machines going off, like, all these beeps. And she was asking me to have his mom call, because it was an emergency.

Lauren Thomas: Then a few minutes later, like, the doctor called back.  when she called that time, it was quiet. The machines had stopped, the beeping had stopped. You could tell the room was quiet. So, I knew, like, it was real. He was gone.

Two weeks before, she picked flowers for the wedding. Now she was choosing funeral wreaths.

Lauren Thomas: I had to contact our wedding venue and let them know, like, “Hey, he passed away. There won’t be a wedding.” And I had to get that deposit back from them, and then in turn contribute that money to his burial.

Lauren Thomas: I don’t even refer to it as a funeral, because he couldn’t even have, like, a proper, decent funeral. It was just a viewing.

Scott Pelley: Because of the pandemic.

Lauren Thomas: And that’s, like, what hurts me the most, because he was so personable, he was so charitable, he was so warm, and yet, he had to die alone on a ventilator and couldn’t even get a proper celebration of his life.

With cruel isolation and outrageous speed, COVID has become the nation’s third leading killer. Cancer and heart disease kill more, but they don’t attack entire families at once. In March, Andy Phillips, a Pennsylvania sales executive, went into the hospital as his wife, Trish, and their four children suffered at home.

Colin Phillips: Body aches, migraines, vomiting; everything. And then two days after my dad went in, I went into the hospital.

Scott Pelley: Trish, you had Andy and Colin in the hospital at the same time and you must’ve thought you could’ve lost them both?

Trish Phillips: Yeah. And my father-in-law was in the hospital, too.

Scott Pelley: And then Andy passed?

Andy Phillips was a six-day-a-week runner.

Scott Pelley: And he passed away at what age?

Trish Phillips: He turned 53 the week before.

He endured the marathon in the hospital for 65 days. Weeks later, Trish received a hefty envelope in the mail.

Trish Phillips: It was addressed to Andy. It was an itemized bill from the hospital for about four weeks of his hospital stay.

Scott Pelley: What did it come to?

Trish Phillips: It came to a little over $4 million.

It was months before she learned that insurance would pay, it was unsettling at the worst time. But her husband’s memory helped her through it.

Andy Phillips with his family

Trish Phillips: Andy’s battle really touched and changed a lotta people. And I think he’ll continue to help us.

Scott Pelley: How has it changed you?

Trish Phillips: I’m definitely stronger than I thought. But, you know, I kind of always leaned on him. He was kind of our rock. It’s just a different future for me.

A different future and an uncertain one for the bereaved including Jamie Drezek.

Jamie Drezek: We don’t have the center of our universe anymore. We wanted to grow old with the grandkids and we had plans. And those are all gone

In June, Jamie lost her 49-year-old husband, Craig. He was a college administrator in Connecticut.

Craig Drezek and his family

Scott Pelley: At some point, inevitably, you have to begin worrying about practical things. And Craig was the biggest part of your income.

Jamie Drezek: You know, we had life insurance. But 80% of our income was lost. And you hate to look at it, like– you know, you think about the emotional part. And then you have to think of the practical thing. Like, how am I now gonna raise five children in this life that we’ve built together.

We asked the five to join us, Alex, Sydnie, Colbie, Caden and Kiley.

Jamie Drezek: My youngest is only 12 years old. I have a long way to go still. I can hear them, “don’t ask Mom for that.”  “That’s too expensive.” That makes me feel even worse because I don’t want them to– it’s hard enough dealing with losing your father.

Scott Pelley: It’s a lot to deal with, having such a large family. On the other hand, many hands make light work.

Jamie Drezek: Yeah. As much work as they create, they help at the same time. Not only the physical things that need to get done, but just  to be able to share all of our different stories it’s gonna help keep my husband alive and with us.

Scott Pelley: Craig is sitting all around you.

Jamie Drezek: And when I look at them, I can see it. I see the mannerisms, I see the behaviors, I see a little bit– a lot of him in each of them.

Caden Drezek told us about his dad’s last words to him.

Caden Drezek: As of right now, you’re the man in the house. And you’ve gotta, like, take over. And take all my responsibilities,” so. It’s a lot– it’s still a lotta pressure, but I feel like it’s kind of my job to do.

When a parent dies too young, children age too soon. COVID made Emerick Falta an orphan.

Emerick Falta: Me and my mom– we were best friends. She loved kids. And she loved working with other people.

Emerick Falta and his mom, Emmy.

After his father died years ago, his mother, his best friend, Emmy, raised him in New York. Last week, deaths in the city averaged 70 a day—but last spring, Emmy Falta was sick when 700 were dying each day. As a college junior, Emerick eased her journey to the end.

Emerick Falta: They told me that I was the person in charge of my mom and her medical decisions.

She was 41. Their last touch was through a screen.

Emerick Falta: And throughout that entire FaceTime call– I tried to smile. I tried so hard– to make, you know, if this was my last memory with her, I really wanted it to be me smiling. I wanted it to be me hopeful. And I said, “Mom You’re gonna make it through this. And I love you.”

Scott Pelley: How has losing your mother, your last remaining parent, changed your young life?

Emerick Falta: I’ve always been independent. I’ve always been able to help out others when the help is needed. Now that I’m fully on my own, although it feels lonely, I feel like I can manage.

Jake Schoffstall shares the loneliness and the need to manage. He told his dad there was no need to worry anymore about the family business.

Jake Schoffstall: I said, “Dad, I got it from here. Give me the torch. And let me take care of Mom and Jaidyn and everybody.” And I said, “I’ll keep The Deer Barn open no matter what.”

Scott Pelley: And how old are you now?

The Deer Barn is a feed store in rural Indiana. Jake and his dad started it to add to John Schoffstall’s pay as a firefighter.

Scott Pelley: When do you miss John the most?

Jennifer Schoffstall: At night. When I remember he’s not coming home.

Jennifer Schoffstall told us John got sick in March. Today, Indiana has vaccinated about 6% of the state — half a million people. But, last spring, COVID seemed like just a curiosity on the news.

She couldn’t visit the hospital so to be near him, she and others in the family sat in a car, outside his room, all day and all night—every day.

Jennifer Schoffstall: I sent one text to one firefighter and said, “8:00 tonight, I’ll be at the hospital praying for John.” And so that night, the entire fire department came.

The vigil stood for more than a week.

But 41-year-old John Schoffstall died before dawn on a Sunday. Jennifer was with him — on a FaceTime call.

Jennifer Schoffstall: They were doing CPR at that time. And I was telling him to stop. Don’t go. I needed him. And then they said, “We lost him.”

Scott Pelley: And that was Easter Sunday.

Jennifer Schoffstall: He’s one of the only people I have ever known to be able to go be in heaven on Resurrection Sunday. And that’s pretty powerful to me.

These are early days — days when the bereaved still expect to hear the key in the door or catch themselves thinking about something they’ll say when the one who’s gone comes home. They are days that Lauren Thomas lives in the past tense.

Lauren Thomas: Yes. I cannot take it off. Even though I saw him in the casket. I saw them lower that same casket into the ground. But taking this ring off just confirms that all of this is real. He’s really gone.  So, I don’t know how long it’s gonna be on my hand, but I’m in no rush to take it off.

Scott Pelley: All over the country, people are talking about isn’t it going to be great when this is over.  And it occurs to me, speaking to you, that for a lot of people in this country, it will never be over.

Lauren Thomas: Never be. What is normal? Normal is not a thing for a lot of us anymore.