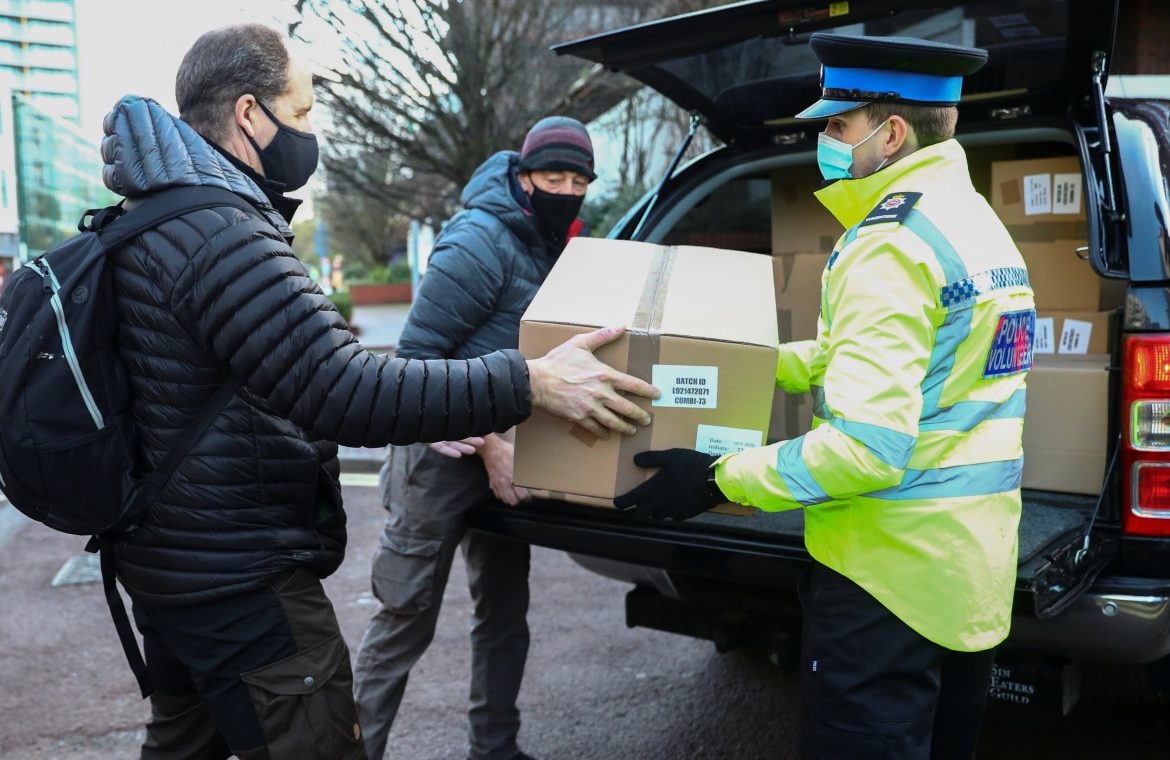 Scientists are fearful the coronavirus variant first found in Britain is further mutating to acquire the same concerning characteristics seen in the South African and Brazilian versions.

Public Health England (PHE) analysis has shown the mutation known as E484K – already found in the South African and Brazilian variants – has been detected in 11 sequences of the British variant, named B.1.1.7.

This particular mutation makes it less recognisable to the body’s immune system and more resistant to the current generation of Covid vaccines.

A door-to-door testing blitz of 80,000 people aimed at finding “every single case” of the South Africa coronavirus variant in England began on Tuesday morning in a bid to curb the spread of the more infectious strain.

The 11 cases of the variant identified over the past week were in people who had no links to travel, prompting concerns the mutation may be spreading in communities.

Mobile testing units and home testing kits are being deployed to areas where the variant has been discovered as the government looks to prevent it getting a foothold.

As door-to-door deliveries of coronavirus tests in parts of England begin, residents in Woking receiving tests have mixed feelings about how effective it will be.

Another resident, Teresa Miller, hailed efforts to deliver coronavirus tests in the area of the town where she lives.

The mother-of-two, who is still recovering from having earlier had coronavirus, said: “I think it’s a good idea to get it under control, obviously, as soon as possible just so we can go back to normal.”

She added: “I’ve literally just got over it, I’m hoping I’m sort of immune to it.”

Ms Miller, 42, who works for Kingston University, said having coronavirus was “awful”, with it leaving her feeling “exhausted” and “totally drained of energy”.

She added: “Obviously it’s important that everyone gets tested and if it keeps it away, then that’s even better.”

But Stewart Dawkins, 58, a key worker for a supermarket, said he thought the tests were “a bit of a waste of time” if people are still being told to go to work.

“They’ve asked you to do this (complete a test) but I’m OK to go to work yesterday,” he said.

“What about all the people I’ve gone and potentially passed it on to last night at work?”

Mr Dawkins said he already got tested every day at work but that the new local testing was still “a good thing”.

He said the detection of the South African variant of coronavirus locally “does concern me”.

He added: “Why don’t they say to people, why don’t you stay at home so it doesn’t spread?”

Robyn Brunskill, 22, agreed with Mr Dawkins, adding: “It is quite concerning, especially if they are saying people who have it haven’t had any direct association with South Africa.

“That makes you worry about where it’s coming from and you’re more vulnerable than you think you are.”

Ms Brunskill said she worked from home but her plumber boyfriend had to go out to work.

She said: “It’s a bit concerning for people who still need to go (to) work. It doesn’t seem like there’s much support in place.

Alcohol-related deaths in England and Wales rose to a record high during 2020, according to the latest government statistics.

The Office for National Statistics (ONS) said there had been a “statistically significantly” spike in alcohol deaths in the period after the first coronavirus lockdown was imposed.

1612267554Quarantining all arrivals could ‘get close’ to preventing new variant spread

A fresh row has emerged over the failure to quarantine all arrivals into the UK after government scientists suggested only this measure or border closures could “get close” to preventing the import of new cases of coronavirus and variants.

It comes after Boris Johnson resisted calls for blanket border measures last week, as he unveiled a mandatory 10-day hotel quarantine policy for those arriving in the UK from 33 countries designated “high-risk” by the government.

Fifteen people are facing fines after they were found breaking Covid rules inside a London restaurant.

Officers attended a restaurant on Chiswick High Road on Friday night following reports from the public that there were a number of people inside the property and the business was operating in breach of coronavirus legislation.

Police said they discovered a number of individuals at the address, all from different households, without face coverings and with no social distancing measures in place.

Officers reported 15 individuals for consideration of fines of up to £200, while the owner of the restaurant is facing a fine of up to £10,000. One individual was arrested for being drunk and disorderly.

1612266031Cold and flu symptoms should be treated as possible Covid cases, argue doctors

Patients reporting symptoms of the common cold should be treated as possible coronavirus cases, a group of doctors has urged the government in a new open letter published by The British Medical Journal.

While Covid-19 is far more severe than seasonal influenza, the two conditions do share a number of symptoms like a runny or blocked nose, a sore throat and headaches, the GPs said.

Joe Sommerlad has more on this below:

Scientists are fearful that the coronavirus variant first found in Britain is further mutating to acquire the same concerning characteristics seen in the South African and Brazilian versions.

Analysis from Public Health England (PHE) has shown that the mutation known as E484K has been detected in 11 sequences of the British variant, named B.1.1.7.

Almost half of all deaths registered in England and Wales in the week to 22 January involved Covid-19, the highest weekly proportion yet during the pandemic, health correspondent Shaun Lintern reports.

The Office for National Statistics (ONS) said more than 90 per cent of the 8,422 registered deaths involving Covid-19 recorded the virus as the underlying cause of death.

The latest statistics also revealed the number of deaths registered in England and Wales during the latest week was 41 per cent above the five-year average, or a jump in 5,460 deaths.

In care homes, the weekly registered deaths involving coronavirus has now passed 2,000, their highest level since the end of April.

The ONS reported 2,364 deaths of care home residents involving Covid-19 in the week to 22 January across England and Wales. This includes residents who died in care homes, hospitals and other settings.

This is an increase of 37.5 per cent on the previous week, and the highest weekly number since the week ending 1 May.

A total of 33,215 care home residents in England and Wales have now had Covid-19 recorded on their death certificate.

The highly contagious variant of the coronavirus first detected in the UK now accounts for up to 20 percent of infections in the wider Paris region, according to a leading hospital.

Follow our breaking news story for more updates on this:

A total of 117,378 deaths had occurred in the UK by 22 January where Covid-19 was mentioned on the death certificate, the ONS said.

This could change as more deaths are registered for the second half of the month.

During the first wave of the virus in April 2020, there were 23 consecutive days when the death toll – based on death certificates – was above 1,000.

All regions of England recorded an increase in registered Covid-19 deaths in the week to 22 January, the ONS said.