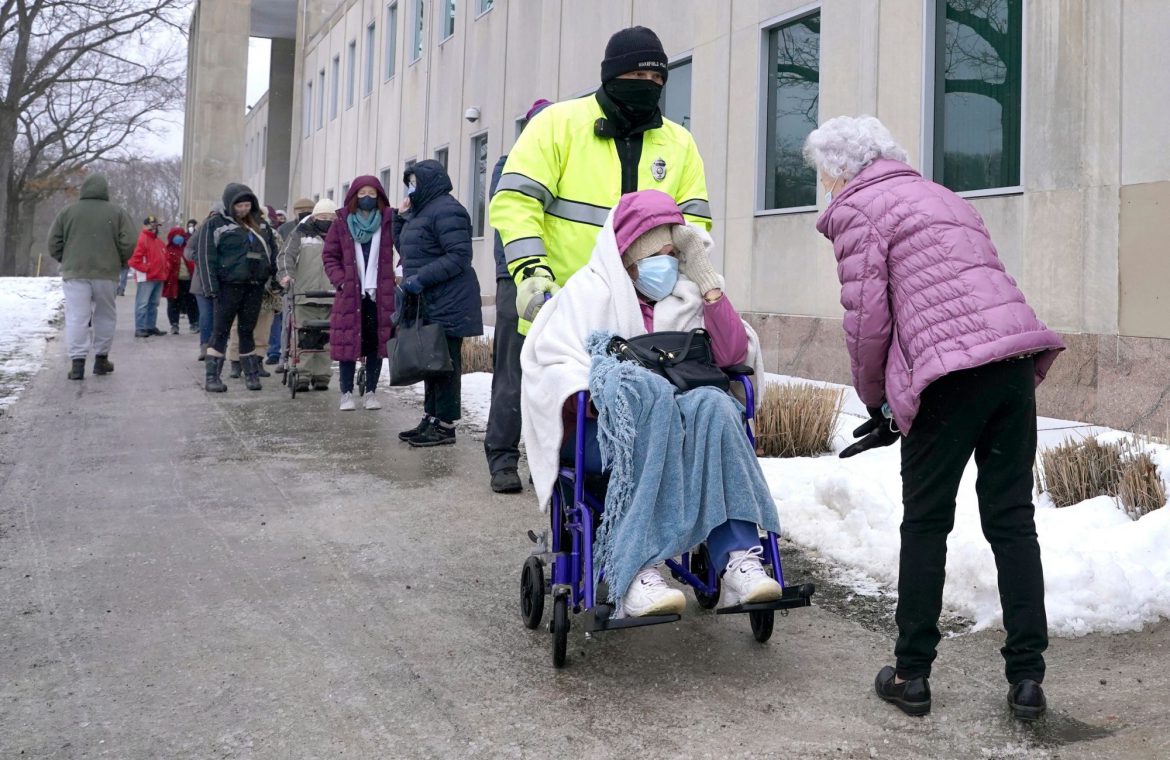 The Biden administration will begin distributing COVID-19 vaccine doses directly to retail pharmacies in an effort to expedite vaccinations across the nation.

White House’s COVID-19 response coordinator Jeff Zients said the program will start with about 1 million doses sent to 6,500 pharmacies starting next week. The number of pharmacies could ultimately each 40,000.

“This will provide more sites for people to get vaccinations in their communities,” Zients said. “And it’s an important component to delivering vaccines equitably.”

Zients said 10.5 million doses will be distributed this week, up 5% from last week and 22% increase in weekly doses since Biden took office Jan. 20.

COVID-19 has killed more than 443,000 Americans, and infections have continued to mount despite the introduction of a pair of vaccines late in 2020. USA TODAY is tracking the news. Keep refreshing this page for the latest updates. Sign up for our Coronavirus Watch newsletter for updates to your inbox, join our Facebook group or scroll through our in-depth answers to reader questions.

►Capt. Tom Moore, the British World War II veteran who shuffled into the hearts of his locked-down nation while raising money for health care workers, has died after testing positive for COVID-19. He was 100.

►Tourists won’t be running with the bulls at the Festival of San Fermín in Pamplona, Spain, this July for the second year in a row. “An international festival like San Fermín, in which millions of people come to Navarra, is not going to be possible,” Navarra regional President María Chivite said Tuesday.

►The U.S. Centers for Disease Control and Prevention’s order requiring people to wear a face mask when traveling on airplanes and other transit went into effect Monday night. The order applies to those traveling into, within or out of the U.S.

►Giving COVID survivors only one dose of the vaccine wouldn’t negatively impact on their antibody levels but would free up many urgently needed vaccine doses, a study suggested Monday.

►The U.S. Department of Homeland Security announced Monday vaccine sites will be considered “sensitive locations” and will not be targeted by Immigration and Customs Enforcement agents except in “extraordinary circumstances.”

►While residents of nursing homes and their caregivers have been considered a top priority for COVID-19 vaccination, only 38% of nursing home staff accepted shots when they were offered, new data from the Centers for Disease Control and Prevention revealed Monday.

📈 Today’s numbers: The U.S. has more than 26.3 million confirmed coronavirus cases and more than 443,000 deaths, according to Johns Hopkins University data. The global totals: More than 103 million cases and 2.24 million deaths. Nearly 50 million vaccine doses have been distributed in the U.S. and 32.2 million have been administered, according to the CDC.

📘 What we’re reading: Studies suggest up to 80% of people who have COVID-19 symptoms experience a reduced or complete loss of smell or taste. Most survivors regain their senses in a few weeks. But some don’t, and researchers say they may go without them for the rest of their lives. Read the full story.

Quick dispensing of vaccines could curb spread of variants

Speeding up the rate of vaccinations across the nation could help curb the spread of newer, highly infectious forms of COVID-19, Dr. Anthony Fauci says. Fauci said that while current vaccines may not offer the same level of protection against the variants that they provide against the original virus, they can ease the impact of the disease, including hospitalizations and deaths. People need to get vaccinated when it becomes available “as quickly and as expeditiously as possible,” Fauci said at a virtual news briefing with the White House Covid-19 response team.

“Viruses cannot mutate if they don’t replicate. And if you stop their replication by vaccinating widely and not giving the virus an open playing field to continue to respond to the pressures that you put on it, you will not get mutations.”

Andrew Yang, the entrepreneur turned presidential candidate who is now running for New York City mayor, tested positive for COVID-19, he announced Tuesday. Yang said he had tested negative as recently as this weekend but received a rapid test that had a positive result, he tweeted on Tuesday.

Yang said he was quarantining. Among New York City mayoral candidates, he has been among the most prolific in-person campaigners in a race that has been otherwise forced online because of the pandemic. A staff member of his campaign had previously tested positive shortly after he announced his run. He said his campaign has begun contact tracing efforts to determine who he has been in contact with.

Russia’s entry into the global vaccine sweepstakes appears to be a winner, at least in early returns. The Sputnik V vaccine drew an effectiveness rating of 91.6% in a Phase III trial, according to a study published Tuesday in the British medical journal Lancet. The trial last fall involved about 20,000 Russians. The most commonly reported side effects were flu-like symptoms, pain at the injection site and fatigue; serious side effects were rare.

The vaccine was approved by the Russian government in August despite minimal testing. President Vladimir Putin at the time hawked the vaccine on national TV, boasting that one of his daughters had already been vaccinated. But a large-scale vaccination campaign didn’t start until December; doctors and teachers were first in line. Outside Russia, Sputnik V has received authorization in over a dozen nation.

Rich, influential should not get first crack at vaccines

Vaccine rollouts in California, Washington state and elsewhere are sparking worry among health leaders, who warn that doses unfairly given to rich or influential people could cause critical supplies in the COVID-19 battle to be cut. The Washington state Health Department said in a statement Monday that “VIP scheduling, reserving doses for inequitable or exclusive access and similar practices are banned and will not be tolerated.” The Seattle Times reported that three medical systems in the region gave special vaccine access to big donors or foundation members. Two of the hospital organizations acknowledged they made a mistake in prioritizing influential people.

In California, some essential workers – teachers, first responders and food and farm workers – remain next in line for the shots. But after that, the state will primarily expand eligibility by age, likely people 50 and up. The goal: to speed up a chaotic vaccine rollout that consistently has California lagging behind many other states in distribution rates even as it has given roughly 3.3 million immunizations as of Monday.

District of Columbia Public Schools went to court Monday for a temporary restraining order against the Washington Teachers’ Union to avoid a work stoppage that could delay reopening of some schools for in-person learning. In-person learning across the city was scheduled to start Monday, but winter weather delayed the opening. Schools were opening two hours late for in-person students on Tuesday. The union scheduled a news conference for Tuesday morning to discuss its position.

In Chicago, school district officials extended remote learning Monday for two more days and called for a “cooling-off period” in negotiations with the teachers’ union, citing progress but not a full agreement on COVID-19 safety plans for returning to schools. More than 60,000 students and about 10,000 teachers and staff in K-8 had been scheduled to start school Monday for the first time since last March, part of the district’s gradual reopening plans during the pandemic.

The U.S. government says it won’t conduct immigration enforcement arrests at vaccination sites around the country except in “extraordinary circumstances.” In a statement Monday, the Department of Homeland Security said vaccine sites will be considered “sensitive locations” and will not be targeted by Immigration and Customs Enforcement agents. DHS says it encourages everyone “regardless of immigration status” to get vaccinated when they are eligible under local rules.

ICE has previously included health care facilities as well as churches among the sensitive locations where arrests would generally not be carried out.

Some pregnant women remain unsure about getting the COVID-19 vaccine as safety data is scarce and health agency guidelines are vague and in some cases contradictory. But Dr. Anthony Fauci, the nation’s leading infectious disease expert, said Monday that about 10,000 pregnant women in the U.S. have been vaccinated since the Food and Drug Administration authorized two vaccines and so far there have been “no red flags.”

“We had a lot of pregnant women vaccinated, the FDA followed them and will continue to follow them,” he said during a media roundtable at the IAS COVID-19 Conference: Prevention. “Even though we don’t have good data on it, the data that we’re collecting on it so far has no red flags.”

The Centers for Disease Control and Prevention guidelines say the decision is up to the mother in consultation with her health care provider. Fauci said Monday that the agency is sticking with that recommendation.

As people of color suffer disproportionate rates of COVID-19 cases, hospitalizations and deaths, health equity leaders are calling for better health data tracking to shed light on racial disparities. A lack of data is masking vaccination rollout transparency, health equity researchers say, and the data deficit is hurting those most vulnerable. So far, only 16 states are releasing vaccination counts by race and ethnicity, and the data is incomplete.

In a White House press briefing Monday, COVID-19 Health Equity Task Force Chair Dr. Marcella Nunez-Smith also emphasized the need for better race and ethnicity data on vaccinations. After summarizing higher mortality and hospitalization rates among people of color, such as Black, Latino and American Indian people, she said she was “worried” about being “behind” on race and ethnicity data collection amid vaccine rollout.

“As of Jan. 30, we’re missing 47% of race and ethnicity data on vaccinations,” Nunez-Smith said. “Let me be clear: We cannot ensure an equitable vaccination program without data to guide us.”

Don't Miss it Safety and efficacy of an rAd26 and rAd5 vector-based heterologous prime-boost COVID-19 vaccine: an interim analysis of a randomised controlled phase 3 trial in Russia
Up Next Monoclonal antibodies: ‘great hope’ in Covid treatments fails against variants | Coronavirus