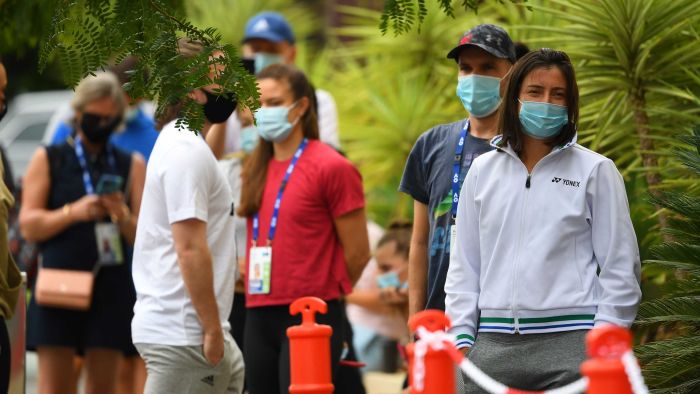 Just three days out from the start of the Australian Open, players will have to emerge from isolation once again, with warm-up events set to resume today.

Key points:Matches in the Melbourne Summer Series will resume today, subject to negative test resultsPlayers may have to play more than one match per day to finish before the Australian OpenWomen players will play a 10-point tie break in lieu of a third set

Thursday’s matches in WTA and ATP events were postponed after a positive COVID-19 test for a worker in the Grand Hyatt, which was used as a quarantine hotel, forced players and staff to get tested and head back into isolation.

Those matches were rescheduled for Friday, with the remainder of the tournament condensed into next three days to ensure all the matches are finished in time for Monday’s Australian Open start.

It also delayed the draw for the first major of the year, which had already been forced behind closed doors by the pandemic.

Players who were not at the infected hotel were able to continue training as normal, but matches could not go on without such a large portion of the draw.

Australian veteran Matt Ebden got his negative test back and a number of other players reportedly returned negative results by Thursday night.

Not everyone was thrilled with the arrangement, with French star Benoit Paire tweeting his dismay.

“As luck would have it, one more day of isolation for the players who were at the Hyatt and which hotel was I in????!!!!!!!” the world number 28 wrote on Thursday afternoon.

He said it was becoming too complicated to play tennis and that he would “avoid saying what I think about COVID because I will annoy a lot of people”.

He added that he was “not complaining”, because he was aware a lot of people have it a lot worse than him right now.

Space to play or pause, M to mute, left and right arrows to seek, up and down arrows for volume.WatchDuration: 2 minutes 14 seconds2m 14s Tennis Australia CEO says he is confident the Australian Open will go ahead

“The players have been remarkable,” Tiley said on Thursday.

“They’ve been 14 days in quarantine, some of them longer, and it took them a while to get used to that as we all know with their comments.

“But the majority have been fantastic … when we made the calls last night and this morning they completely accepted it and have all gone and got tested.

“They’ve been very appreciative of the opportunity to play and I had a number of calls … from them confirming that we want this to happen and we will do whatever.”

If they want to get through matches in time for the start of the Open, some players will likely have to play multiple matches in a day.

That includes Australian world number one Ash Barty, who is slated to play American Shelby Rogers in the quarter-finals of the Yarra Valley Classic.

Ash Barty may be forced into multiple matches per day, but she won’t have to play three sets.(AAP: Dave Hunt)

That could set up a semi-final against 23-time major champion Serena Williams, who is playing US compatriot Danielle Collins in the quarters, which will also play host to a rematch of the 2020 Australian Open final between Garbine Muguruza and Sofia Kenin.

In what will come as some measure of relief for the women players, there will be no gruelling third sets to negotiate.

All WTA singles matches in the Melbourne Summer Series will feature a 10-point match tiebreak, should those matches go to a decider.

However, there will be no such concessions made for the men on the ATP tour.

In the men’s tournaments, former Open champion Stan Wawrinka and Greek star Stefanos Tsitsipas will be fresh out of isolation, playing at the Murray River Open and ATP Cup respectively.

Despite the delay, Friday’s matches will be taking place under a considerable cloud that’s not COVID-related.

Up to 25mm of rain is forecast in Melbourne on Friday, with little to suggest the weather system will pass until the early hours of Saturday morning, meaning matches on those courts without a roof will likely have to be moved.