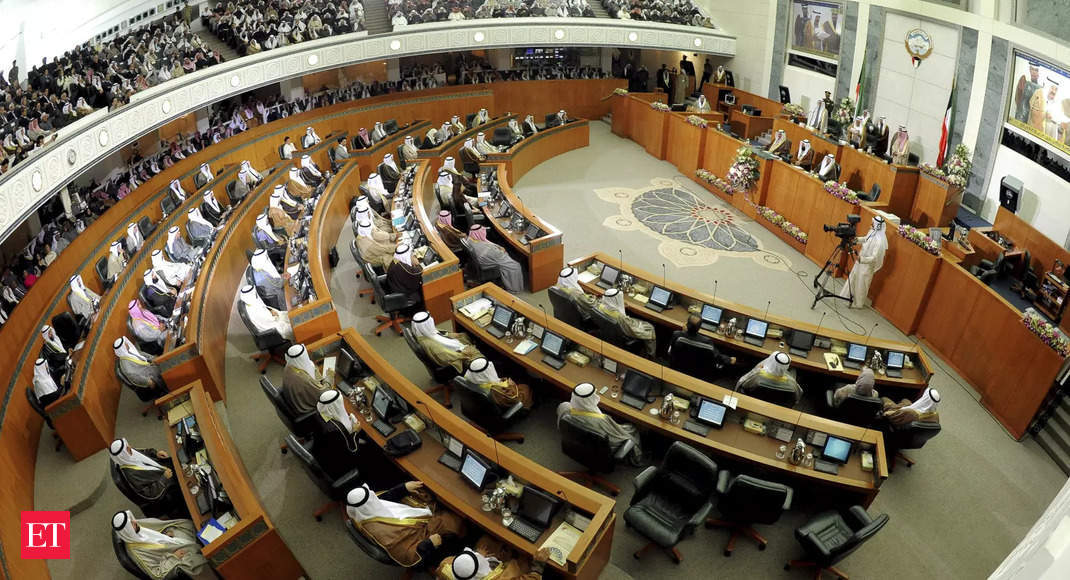 Kuwait’s government has transferred the last of its performing assets to the country’s sovereign wealth fund in exchange for cash to plug its budget deficit, after a political dispute over borrowing left one of the world’s richest nations short of cash and prompted Fitch to cut its outlook to negative.

Fitch affirmed Kuwait’s AA rating but said “the imminent depletion of liquid assets” and “absence of parliamentary authorization for the government to borrow” was creating uncertainty. Its report follows S&P Global Ratings’ recent warning that it would consider downgrading Kuwait in the next six to 12 months if politicians fail to overcome the impasse.

Though it’s a high-income country, years of lower

prices have forced Kuwait to burn through its reserves. Desperate to generate liquidity, the government began last year swapping its best assets for cash with the $600 billion Future Generations Fund, which is meant to safeguard the Gulf Arab nation’s wealth for a time after oil. With those now gone, it’s not clear how the government will cover its eighth consecutive budget deficit, projected at 12 billion dinars for the fiscal year beginning April.

The assets include stakes in Kuwait Finance House and telecoms company Zain, a person familiar with the matter said, asking not to be named because the information is private. State-owned Kuwait Petroleum Corp., which has a nominal value of 2.5 billion dinars ($8.3 billion), was also transferred from the government’s treasury in January, the person said.

The Finance Ministry declined to give details about the swaps. Responding to Fitch, however, Finance Minister Khalifa Hamada said Kuwait’s financial position remained “robust” due to the cushion provided by the FGF. The government’s priority going forward would be to replenish the treasury, he said, without specifying how.

“It’s a very immediate crisis now, not a long-term one like it was before,” said Nawaf Alabduljader, a business management professor at Kuwait University. “The Future Generations Fund is our life jacket but we don’t have a boat to take us to shore, we have no vision. We need to restructure our economy and move away from the welfare state.”

Like its neighbors, Kuwait is contending with the twin pressures of Covid-19 and lower oil prices. Unlike Saudi Arabia and others, however, Kuwaiti lawmakers have blocked proposals to borrow on international markets to cover the fiscal shortfall. Kuwait hasn’t returned to the market since its debut Eurobond issuance in 2017.

Though nearly three-quarters of the budget is dedicated to public sector salaries and subsidies, parliamentarians have also opposed any hint of spending cuts, saying the government must reduce waste and corruption before passing the burden onto the public or resorting to debt.

The FGF, meanwhile, can’t be touched without legislation, and the idea of dipping into the national savings pot is deeply unpopular. Parliament already passed a law last year exempting the government from transferring the usual 10% of revenues into the FGF during years of deficit.

The swaps have bought the government a few months to push through its borrowing law. If that fails, it could still take a loan from the FGF or a debt plan could be issued by decree, though both scenarios are unlikely for now.

With 80% of government income based on oil, Kuwait needs crude at $90 to balance the new budget. But benchmark Brent was trading around $58 a barrel Wednesday while spending is projected to rise 7%.

Kuwait would be looking at “either the imposition of high taxes,” said Talal Fahad Alghanim, former CEO of Boursa Kuwait. “Or, if the government fails to convince parliament, the central bank will have to resort to devaluing the dinar.”