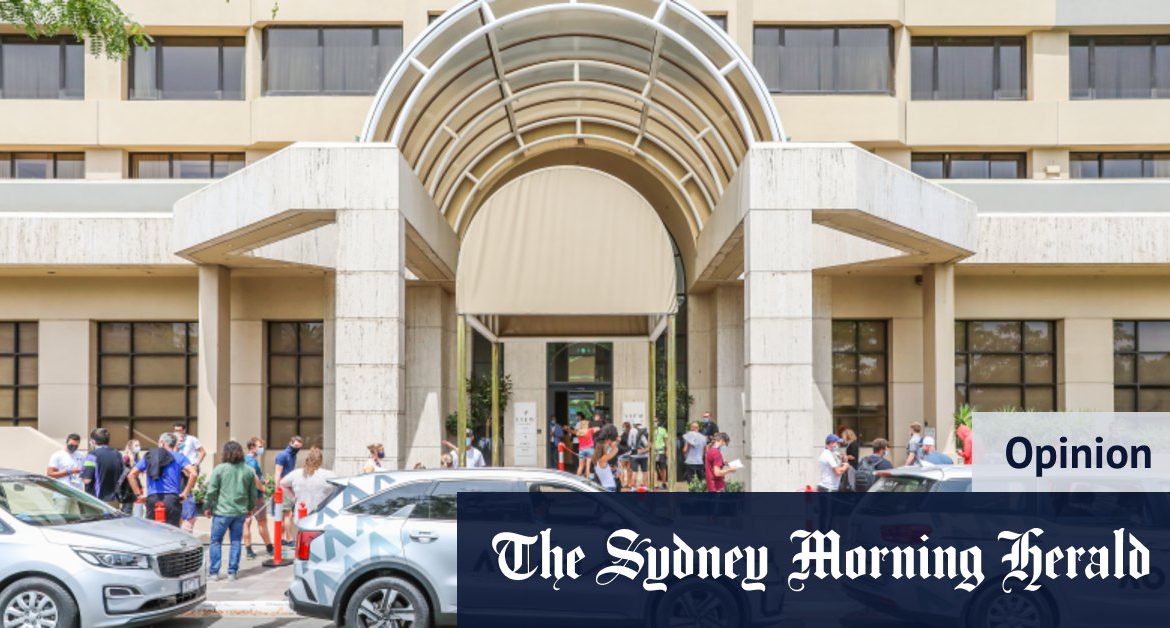 Case one is a 26-year-old man unwittingly infected, who just so happens to have been working at the Grand Hyatt – the hotel where most of the Australian Open tennis players and staff are staying. Whoops.

A quarantine worker at the Grand Hyatt tested positive.Credit:Paul Jeffers

What do we know? He last worked at the Hyatt on January 29. Tested negative at end of his shift. Developed symptoms, then tested positive.

How did he get infected? Two options. First, from somebody staying at the Hyatt. While this is probably the conclusion most people jumped to (myself included), the last known infection among an international arrival at the Hyatt was on January 22 – and they were promptly shipped off to a health hotel.

It is possible the 26-year-old picked up the infection directly from a tennis player or official up to and including January 29 and took over a week to become test positive (i.e. to start shedding the virus). Possible, but not likely.

Other possibilities include that a chain of transmission has gone on in the Hyatt undetected since January 22 and popped up now. If this is the case, we would expect to see some other positive tests emerge. That would be a major threat to the AO going forward, as that previously undetected chain of transmission will need to be ring fenced and stamped out – impacting many players and staff. But this is just a scenario for now.

Another possibility is that the 26-year-old picked the virus up outside the Hyatt. This is also very concerning as it obviously means there is undetected transmission occurring somewhere in Melbourne and Victoria.

So, we have a lot to learn in the next few days. What we can already see is how impressive the Victorian response is – interviewing and contact tracing has happened at warp speed. Well done.
The second case was in the Airport Park Royal, with (we assume) aerosol transmission, whereby the virus wafted out of one room into the corridor, then wafted into another room. Ouch – this virus is slippery.

As we have got better and better at stopping transmission, we have stamped out (I guess) most droplet transmission by things such as the 1.5-metre rule. This means remaining transmission is more likely to be this hard-to-stop aerosol route. Add to this more infectious variants, and we have yet another COVID-19 challenge.

What are the lessons from all this?

1. We can never, unfortunately, make the transmission risk zero in, and out of, quarantine (unless we stop all arrivals from high-risk countries). The game instead is to minimise that risk as much as possible.

2. Best quarantine is a la Howard Springs, near Darwin. Lots of natural ventilation and spacing. No cases yet have (to our knowledge) leaked out of Howard Springs. We need more places like it, and to send the highest risk people there.

3. Given that we will still probably need hotel quarantine as well, we need a total quality improvement process. That means no more blame games – rather, open disclosure of errors and happenings so that we can all keep learning and improving. I have been impressed in the last couple of months that this approach is coming to the fore.

But we still need something like an independent agency that collects anonymous reports of near misses, regularly visits and inspects quarantine facilities and reports publicly and transparently on what they find and learn.

There are too many small learnings to list in one opinion piece – such is the nature of complex systems. But as one example, what seemed like a good idea of having security guards on the floor (WA event) is now probably best supplanted by just using CCTV surveillance of corridors.

A COVID-19 testing site is busy in Melbourne’s south-east on Thursday.Credit:Joe Armao

Another example is to maximise outdoor ventilation – doors and windows open in rooms as much as possible to expel air out, and ventilation to flush out corridors.

A critical thing we can urgently do is vaccinate the border and quarantine staff ASAP. Evidence is growing that the vaccines reduce the chance of you being infected in upper airways as well as getting sick – meaning that vaccinated quarantine staff are less likely to unwittingly carry the virus out into our community.

Otherwise, the time for blame games is over. The time for transparency, mutual and rapid learnings is here to – bit by bit – improve the quality of quarantine and minimise the risk of a social disruptive and costly third wave.

Professor Tony Blakely is an epidemiologist at the University of Melbourne.

Tony Blakely, an epidemiologist and public health medicine specialist, is a professor at the University of Melbourne.