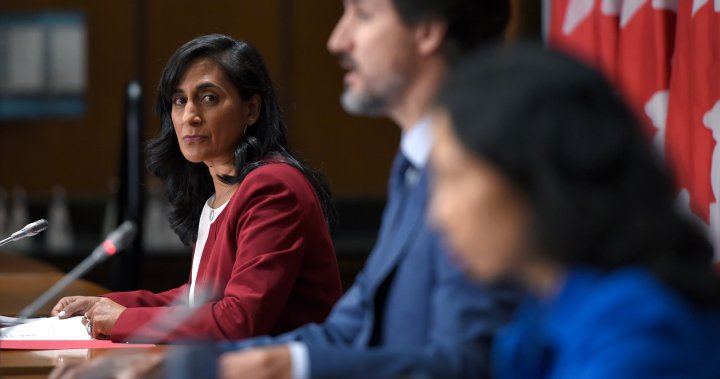 As provinces implore the federal government to make its coronavirus vaccine contracts public, Procurement Minister Anita Anand has confirmed that the entirety of the deals are subject to confidentiality clauses.

However, Anand said she’s trying to push back on these clauses in conversations with the pharmaceutical companies.

“The confidentiality clauses apply to the contracts as a whole,” Anand told the House of Commons industry committee on Thursday.

“I have gone back to the vaccine manufacturers to discuss this issue with them. As one of the contacting parties, they are very concerned to ensure that Canada respects its contractual obligations.”

2:07
Coronavirus: More than 70% of Canadians intend to get COVID-19 vaccine, Tam says

Coronavirus: More than 70% of Canadians intend to get COVID-19 vaccine, Tam says

To date, some countries have publicly released COVID-19 vaccine contracts – including the United States, India and some in Europe.

“Every country is different, given their domestic capacity, for example. And therefore the negotiations with countries and the resulting contracts are not identical,” Anand said.

Her comments come as Canada’s premiers pleaded with the prime minister to unveil the details of the coronavirus vaccine contracts during a First Ministers’ meeting on Wednesday. Prime Minister Justin Trudeau rejected the appeals during the meeting, according to provincial sources.

In a statement sent to Global News on Friday, Saskatchewan Premier Scott Moe reiterated the call.

“Canada’s premiers have called on the federal government to allow provinces to confidentially review the contracts,” Moe said.

“While the Prime Minister has stated that quarterly delivery schedule is on track, we need to understand what protections are actually in those contracts for Canadians. We cannot understand what certainties exist in the contracts because we have not seen them.”

This lack of transparency has forced provinces to rely on the timelines that the federal government opts to share with them — timelines which, to date, have already changed multiple times amid delivery delays.

3:23
More uncertainty over delivery of COVID-19 vaccine doses to Canada

More uncertainty over delivery of COVID-19 vaccine doses to Canada

It’s not only the premiers who are calling for the shrouded details of the contracts to be unveiled. Experts told Global News that they also believe the provinces should be allowed to take a good look at the wording in the contracts so they can plan for possible delays.

“Provincial protocol is based on when we receive these vaccines. If we don’t know for sure when we receive those vaccines, we’re not making effective use of our resources and we need to be able to vaccinate people in order to get out of this,” said biostatistician Ryan Imgrund, who consults with public health agencies in Ontario.

He explained that as part of their rollouts, some provinces began giving out first doses of the two-dose COVID-19 vaccine before they received deliveries of the second doses. His concern, he said, is that the delays could impact the province’s ability to deliver this second jab within the Health Canada-approved timeframe.

“We don’t really have enough information on these vaccines. They haven’t been studied long enough to know the impact of waiting more than three to six weeks. We don’t know what that’s going to do for the antibody count. We just simply don’t know,” Imgrund said.

3:03
Health Matters: When will the pandemic end?

Amir Attaran, a professor in the faculties of law and school of epidemiology and public health at the University of Ottawa, echoed the concern.

“The federal government has been gaslighting Canadians on vaccines for months now with delivery timetables that are imperfectly disclosed, frequently changeable and bald assertions about how things will be OK without demonstrating the transparency to show why we should believe it will be OK,” Attaran said.

He worried about the impact this lack of transparency could have on the mental health of Canadians.

“You know, when will they get vaccinated? …How many people would like to know if there’s a chance of their child being vaccinated before September, when school opens again?”

But as the calls to release the contracts grow, Anand warned that Canada could be held in breach of contract if the government opts to share them publicly.

“In terms of Canada’s bilateral contracts with vaccine producers, there are a number of clauses that we as a government of Canada, as one of two contracting parties, need to respect as a matter of law,” Anand said.

“We don’t want to put our vaccine procurements at risk. We all need vaccines, and if we were to disclose these contracts we would risk receiving those vaccines, because we would be in potential breach of contract.”

Read more:
The EU price list for COVID-19 vaccines was leaked. Will Canada release its prices?

While Imgrund said he understands these concerns, he wondered why the government can’t even share the details with relevant provincial public health officials.

“I can understand why things like price, both parties would want to keep confidential. I can fully understand that. But it’s not really the prices we care about,” he said, noting that the schedule is what’s important.

“I wouldn’t think that it would be a breach of contract to share that contract with interested public health officials in every single province who need this information when the health and safety of their province is on the line.”

He said that without looking at the contracts, provinces won’t know which delays actually constitute a breach of the deal Canada has signed with the pharmaceutical companies. That means the provinces don’t know which vaccine delivery dates are firm contractual obligations, as opposed to non-binding goals.

“The fact that we can tell people to expect this many (doses) and then it either gets cut fully or it gets dropped by 20 to 50 per cent — there’s a problem with these contracts,” Imgrund said.

“It should be shared with the individuals in charge of vaccine procurement in every single province.“

While the feds have said they’ve investing over $1billion to secure vaccines, the government still has kept mum on the price tag of each dose.  But on Friday, figures released by Statistics Canada gave another indication of what kind of funds are being spent to inoculate Canadians.

“Based on a preliminary analysis, it is estimated that Canada’s imports of COVID-19 vaccines totalled approximately $16 million in December,” read the release.

Statistics Canada didn’t break down the cost per dose, but the government said in December that it was slated to receive 424,150 doses that month — which would equate to just over $37 per dose.

Security filings released by Pfizer show that the United States paid US$1.95 billion for 100 million doses — or US$19.50 per dose, which is just shy of C$25. Reuters has reported that the European Union is paying US$18.9 per dose, which translates to a little over C$24.

That means Canada may have paid over $10 more per dose than the United States and Europe for the vaccines received in December.

Still, Imgrund doubts Canadians are worried about the cost. What’s needed, he said, is a clear timeline.

“I don’t think a majority of the Canadian population cares how much we spend for these vaccines,” Imgrund said.

“What we care about is the schedule.”

Don't Miss it COVID-19 LIVE news and updates: Second dose of vaccination against COVID-19 to begin from February 13
Up Next NBA: Kevin Durant pulled from game twice due to Covid-19 protocols