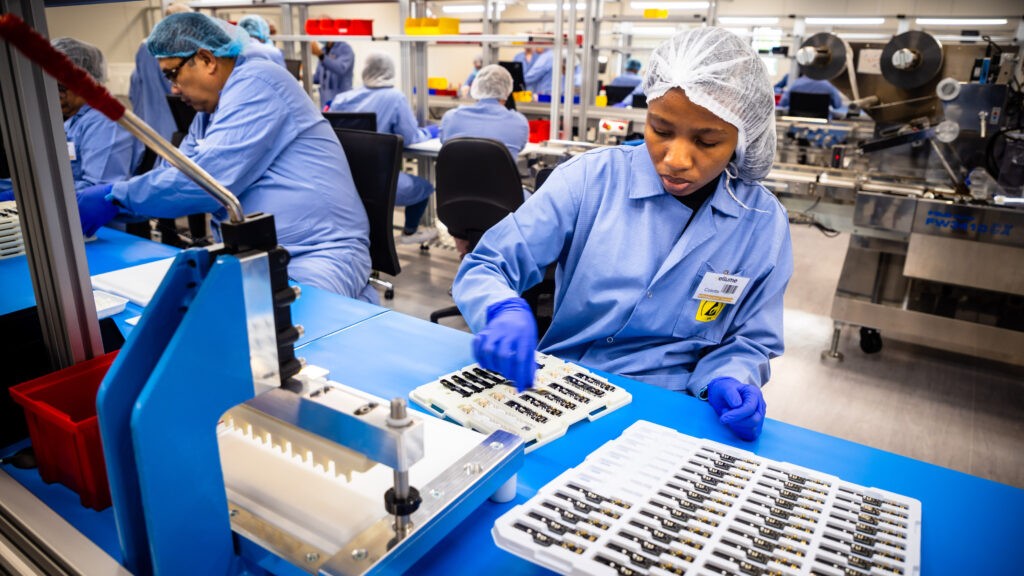 For months, U.S. public health experts have called on the federal government to approve and fund cheap and fast at-home Covid-19 tests, to help bring the spread of infection under control. But when the Biden administration this week announced a $231.8 million deal to ramp up production of the first fully at-home test, the experts’ response was, to say the least, unenthusiastic. One dismissed it as “a spit in the ocean.”

It’s not that home testing with a 15-minute turnaround time isn’t a good idea, they said, it’s just that the rollout of this initial kit is too little and too late, and the test too expensive and complicated, to help extinguish the raging pandemic fire. A number of experts called on the Biden administration to subsidize the home test for consumers, and said the Food and Drug Administration needs to do more to make such tests widely available.

The first fully over-the-counter Covid test, a rapid antigen test produced by the Australian company Ellume, was granted an emergency use authorization in December. On Monday the administration said it would provide funding to build a factory in the U.S. that will eventually make millions of tests every month, but will take time to scale up.

“Making easier tests available to every American is a high priority with obvious benefits,” Andy Slavitt, White House senior adviser for Covid-19 response, said in a news conference where the deal was announced.

A year after the virus reached the United States, Covid testing remains hard to come by for many Americans, with tests restricted to doctor’s offices and other settings staffed by health workers. For many, the wait for results takes days, which is too slow to catch active, contagious infections, especially in asymptomatic people who may have been exposed to someone with an infection.

It’s an ongoing debacle fueled, critics say, by the Trump administration’s failure beginning early last year to develop and implement a national testing strategy. While the government spent billions to develop, buy, and distribute the most promising vaccines for free, testing was largely turned over to the private sector, which developed hundreds of different tests, many of them put into use without government vetting.

Even with mass vaccine rollouts, easy, accessible testing, along with mask use, will continue to be key components in curbing the spread of infection, said Atul Gawande, a surgeon, professor at the Harvard T.H. Chan School of Public Health, and former Covid-19 adviser to the Biden transition team. While he said the Ellume deal is a good step, technology and price barriers mean it’s not enough.

Gawande said the new administration has committed to a national testing strategy, which is important. Now the challenge is getting tests out to the public and communicating the importance of regular testing.

“We come back to again and again and again, the most powerful tool in the public health bag is communications,” said Gawande. “When we have had inconsistent communications from the top, a lack of commitment to widespread testing, even [President Trump] discouraging testing, it’s no surprise we are where we are.”

This week’s news is unlikely to change much, at least right away. The Ellume deal will ship 100,000 test kits to U.S. households per month from February to July, and eventually scale up production to 19 million tests per month.

In January, roughly 1.8 million to 2 million Covid tests were performed every day in the United States. The testing landscape is a mix of PCR tests, which have high accuracy rates but often take longer to generate results, and rapid antigen tests that have proven less accurate but give quick answers. Public health experts say that too much of the testing is reactive — used to help diagnose individuals who have possible symptoms or might have been exposed to the virus — instead of being deployed broadly to prevent spread and protect the general public. That’s where the call for cheap home testing comes in.

Molecular, antigen, rapid, PCR, RNA — you’ve probably heard many of these terms used to describe tests for an active Covid-19 infection. But what are these tests, how do they work, and how accurate are they?
Dom Smith for STAT

Michael Mina, an assistant professor of epidemiology at the Harvard T.H. Chan School of Public Health, has been among the loudest voices calling for federal funding and distribution of cheap, rapid, paper-strip antigen tests as a means to control the pandemic. In an ideal world, Mina said, every American would be able to test for Covid twice a week at home, with supplies paid for and distributed by the federal government.

Mina and others said they have concerns about the equity of the Ellume test. It is priced at $30, far too expensive for most Americans to conduct frequent, regular screening at home. And the test is linked to a smartphone app that requires some tech savvy and steps that Mina and others said add difficulty and confusion for most potential users. The test kit transmits results to users via the app, and conveys data to local public health agencies to enable tracking case counts and contacts.

“It’s not going to be an effective tool to really stop spread,” said Mina. “I look at this decision as more of a putting the cards on the table a little bit,” signaling that the administration is “willing to support rapid testing and home testing.”

Mina said widespread home testing would help get the spread of the virus under control. Even assuming a fraction of results are inaccurate, he said, frequent, free testing will catch undetected infections and help people make informed choices about their behavior. Ellume submitted data to the FDA describing the test as 95% accurate. In its approval, the agency cautioned that, as with all antigen tests, the test may give a small percentage of false-positive readings when patients are actually uninfected, or false-negative results when they actually have Covid. It warned that for patients without symptoms, positive results should be confirmed by further testing and that negative results don’t preclude an infection.

Eric Topol, chair of innovative medicine at Scripps Research, said the administration’s deal with Ellume will make “zero” difference and without the government subsidizing the cost of tests, it will do nothing to resolve the inequality of the testing landscape.

“It’s a waste of money. It’s throwing money away,” he said.

The Ellume test is a good test, he added, but it’s not what Americans need right now, which is free, very basic, easy-to-use home testing. He called the number of tests Ellume will provide “a spit in the ocean.”

Ellume said in a statement that its home test “is a critical part of the U.S. COVID-19 response because it’s the only rapid test currently approved for asymptomatic use, and it’s approved for use in ages 2+.”

Other tests have been given emergency FDA approval, but LabCorp’s Pixel and Abbott’s BinaxNOW home antigen tests, both of which are ramping up production, still require telemedicine consults. Mina said adding tech and doctor involvement further slows the process in what should be easy, cheap, accessible testing for all Americans. Critics say the FDA should move quickly to grant emergency authorization for cheap, rapid paper-strip tests.

Gawande was critical of the agency’s approach to regulating home antigen tests, saying it should consider approving lower-sensitivity tests with faster turnaround times to encourage production of cheap, easy tests — even though they might miss some infections.

“When the FDA wants to encourage certain kinds of testing capabilities, it’s been able to do that,” he said. “Right now, it’s still in the individual diagnostic approach.”

A senior FDA official said home tests will play an important role in the pandemic response. Jeffrey Shuren, director of the FDA’s Center for Devices and Radiological Health, told STAT in an interview that the agency sees a bigger role for home tests going forward, but it’s up to companies to develop them and apply for regulatory approval.

There are trade-offs between test performance and speed when comparing the rapid home tests to PCR tests done under medical supervision, Shuren said, noting that the FDA has set somewhat lower accuracy thresholds for the rapid tests. Home testing “will play an increasingly more important role,” he added. “In part, that will come down to production.”

This story is part of a project funded by the NIHCM Foundation. The foundation played no role in the reporting, editing, or presentation of this work.