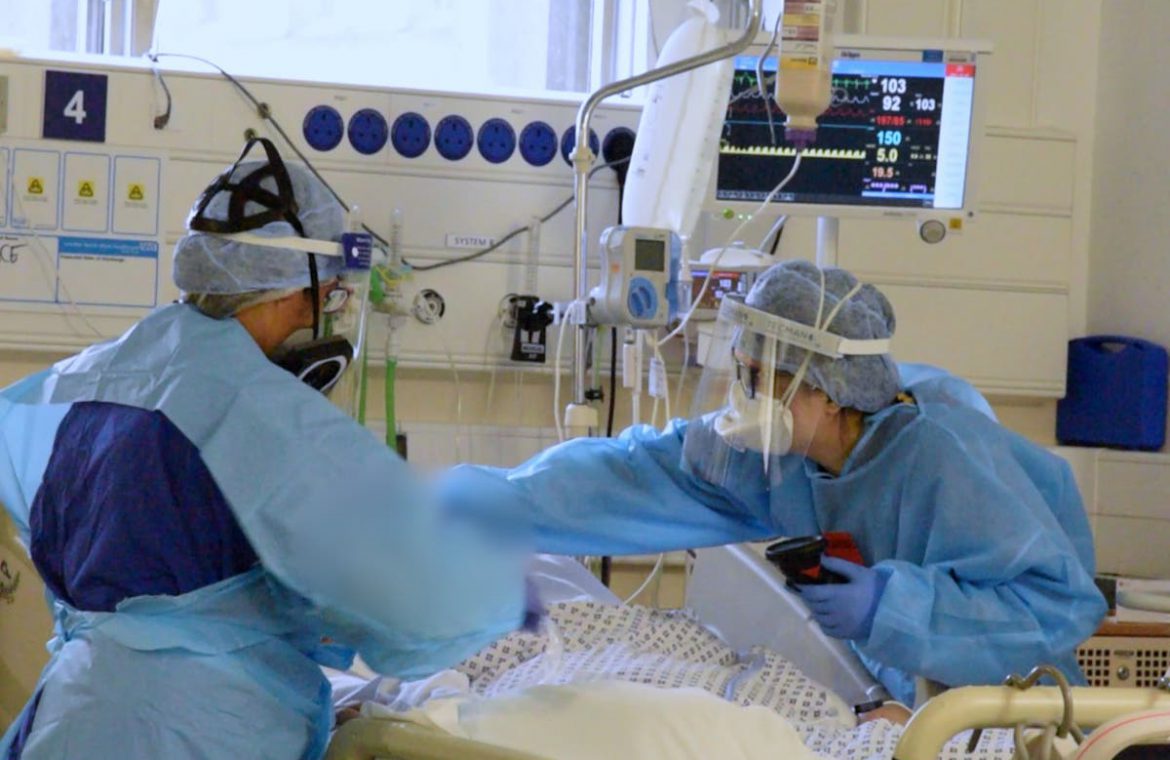 An analysis of the latest NHS data by The Independent shows more than 35,000 patients were likely to have been infected with coronavirus while already in hospital between 1 August and 31 January.

NHS England has estimated as many as 20 per cent of infections could be due to spread within hospitals. Outbreaks at some hospitals have seen whole teams of doctors or nurses affected, in some cases leading to wards having to be closed.

The Independent has learnt several hospitals are now supplying higher grade masks to staff working in general wards, despite Public Health England saying only surgical masks are needed. Research this week suggested staff exposed to coughing were at greatest risk of infection from the virus.

At one hospital, bosses have employed staff as Covid marshals to patrol the wards. They have been given the power challenge staff who may be breaking the rules on social distancing and mask-wearing.

Concerns over the spread of Covid at some hospitals had led to demands from staff for better protection after official guidance said surgical masks were enough on general wards.

At Homerton Hospital in east London the trust has started to give FFP3 masks to nurses and staff. This has also been done at Wye Valley NHS Trust and the Royal Berkshire Foundation Trust. London Ambulance Service has also agreed to provide staff with better masks last month as many staff were forced to wait with infected patients in ambulances.

According to NHS England data, a total of 35,175 patients tested positive for coronavirus seven days or more after being admitted to hospital which makes it “probable” they caught the virus on the wards. This is tougher than the definition in Europe which counts an infection at least 15 days after admission.

The worst affected region between 1 August and 31 January was the West Midlands with 7,210 cases. The northwest had 6,582 hospital-acquired infections while the southeast had 4,755 cases. London, which was among the hardest hit regions for Covid cases, performed better with only 4,495 cases.

The worst performing hospital trust was the University Hospitals Birmingham (UHB) trust which had 996 infections followed by the Mid and South Essex Foundation Trust with 703 infections. UHB has been one of the busiest Covid hospitals, treating more than 1,000 patients at its peak in January.

Concerns have been raised about infection controls and bosses have appointed Covid marshals to challenge staff seen to be breaking the rules. Announcing the move in a message to staff, the trust said: “Marshals have been empowered and provided the authority to sensitively highlight poor or non-compliance with any individual they encounter including senior staff.”

But one member of staff said: “Covid marshals seem to have been deployed to punish those of us trying to take a break in coffee rooms that are too small for us to comply with the rules. Instead of addressing the cause of the problems, the trust have again sought to use a heavy-handed approach to show they’re ‘doing something’.”

The family of 91-year-old Sylvia Besley, who died in November at the Royal Devon and Exeter Trust after catching Covid on a general ward, are still waiting to hear the outcome of an investigation into what happened.

Her daughter Wendy Wills received a letter from hospital bosses following her mother’s death. It said it was reviewing all cases where Covid caught in the hospital may have contributed to the patient’s death.

The trust said it had commissioned a serious incident investigation to understand the factors contributing to the outbreak on its wards and a full report would be published on its website.

Ms Wills said her mother, a former NHS cleaner, was first admitted in September after a fall at her home left her with a fractured shoulder blade and ribs, which were initially not spotted by hospital staff. She went home for two nights in October but had to be readmitted.

Ms Besley was on a medical ward for several weeks before testing positive for Covid-19 and being moved to a specialist Covid ward where she died on 20 November.

“We had a call from the consultant who told us they thought they were losing her,” said Ms Wills. “We could all go in to see her, she was struggling to breathe and on oxygen.

She said she had been promised an investigation into how her mother’s rib fractures were missed but so far she had heard nothing.

An NHS England spokesperson said: “Hospital infection rates track Covid cases in the community which is why it is vital that the public continue to play their part by following the ‘hands, face, space’ guidance.

“Every hospital is asked to rigorously follow regularly updated guidance on infection prevention and control and the NHS is providing dedicated teams to support those hospitals that need it.”