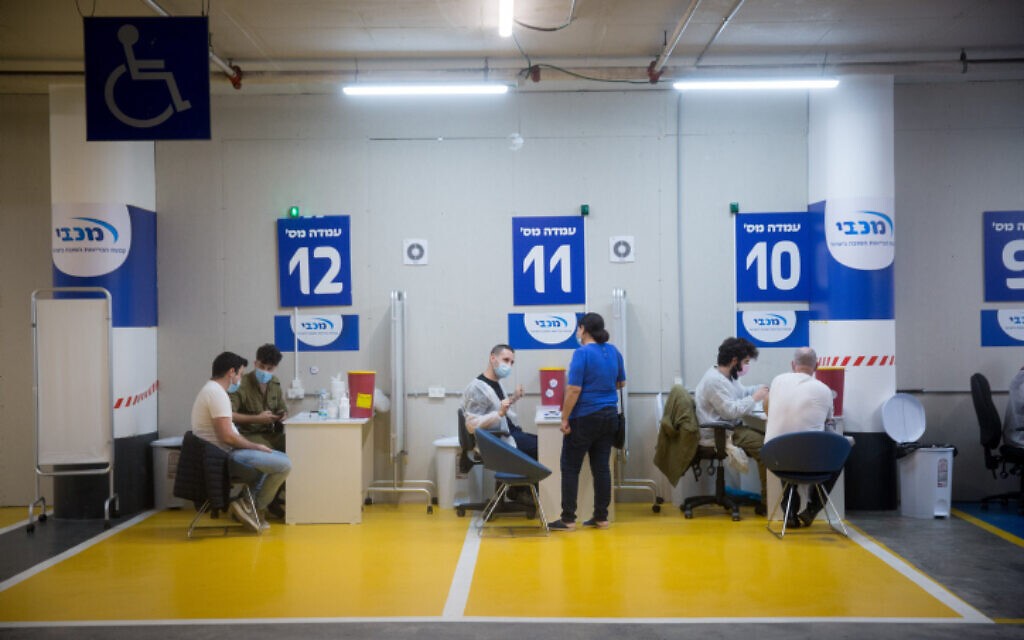 Israel’s largest COVID-19 testing lab says it has found evidence indicating that the Pfizer-BioNTech vaccine significantly reduces the transmissibility of the coronavirus, offering a tentative answer to one of the world’s most burning questions.

A paper published online Monday claims that positive test results of patients age 60 and over had up to 60 percent smaller viral loads on the test swab than the 40-59 age group, starting in mid-January, when most of Israel’s population age 60-plus had already been vaccinated with at least one dose.

The results were published by the MyHeritage lab, which handles more than 10,000 tests a day, in a study co-authored by several prominent scholars, including leading COVID-19 statistician Eran Segal of the Weizmann Institute of Science.

The results are only based on partial data, because MyHeritage did not know if individual samples came from patients who had been vaccinated or not. But overall, the results appear to show that once someone is vaccinated, even if they have the virus in their system, they are less likely to pass it on because they have fewer infectious SARS-CoV-2 droplets hanging around their noses and throats.

“Our result reflects great data, because it gives exactly what we want from a vaccine, namely that it reduces transmission,” Prof. Yaniv Erlich, head of the MyHeritage lab, told The Times of Israel on Monday. “It shows, to some extent, that this reduces viral load in the nose and throat, which is the main channel for transmission of the virus.”

Grandparents receive a visit from their grandchildren in Kfar Yona on April 21, 2020. (Chen Leopold/Flash90)

While the lab found a 60% reduction in viral load for those 60 and over, Ehrlich postulated that it could drop further once more people in the cohort are vaccinated. He emphasized that his research is at an early stage, and the topic needs more investigation.

While there is strong data from Phase 3 trials of the Pfizer-BioNTech vaccine, and since, showing that vaccinated people are far less likely to become verified COVID-19 carriers, clinical trials didn’t produce robust results on whether those who are vaccinated will still spread the virus. Such data is currently the holy grail of vaccine research.

The Israeli study is mostly relevant for Pfizer-BioNTech, which produced the vaccine nearly all Israelis have been given. Last week, the team behind the Oxford-AstraZeneca vaccine released research that was seen as optimistic on transmission, based on positive rates in PCR tests. Dr. Doug Brown, chief executive of the British Society for Immunology, was quoted saying that the study “hints” that the vaccine may be effective in stopping people from transmitting the virus, but the results were seen as far from definitive, and the level of relevance to other vaccines was unclear.

Knowing whether vaccinated people can still spread COVID-19 is seen as key to the world taking big steps toward normalcy. If the vaccinated can still catch and spread the virus, even without getting sick, then the unvaccinated, such as children, would remain at just as high risk, making a return to routine nearly impossible. The importance of transmissibility data has increased with the rise of new extra-contagious variants.

To get around the problem of not knowing whether samples were coming from vaccinated people, Erlich hypothesized that once most of the age 60-plus population had been vaccinated, he would see a drop in viral load compared to the 40-59 age group that had a smaller percentage of people vaccinated.

Before January 15, only negligible differences in viral load between the age groups were seen, but after that date it began to drop for the 60-plus group.

“We checked the early December and late December [data], but the viral load among 60-plus hadn’t changed,” said Erlich, a professor of computational biology at the Interdisciplinary Center in Herzliya. “And we saw the same when we checked in early January. But suddenly, during the last two weeks in January, which is when many 60-plus Israelis had finished vaccination, viral loads for this age group dropped.”

Ehrlich created detailed models covering all of January and February to check that he wasn’t jumping to conclusions and overlooking other changes, like age of people being sampled, gender and new variants, that could be impacting viral load.

The rise of the British variant is not believed to have affected viral load, and other possible influences were ruled out. The only notable factor to account for the change is that the majority of older Israelis are vaccinated but most younger Israelis aren’t.

An Israeli health worker administers a dose of the Pfizer-BioNtech Covid-19 vaccine at Clalit Health Services, in a gymnasium in the central Israeli city of Hod Hasharon, on February 4, 2021. (JACK GUEZ / AFP)

Ehrlich said further research is needed to calculate the exact direct impact of vaccination on viral load, but his model suggests it could be reducing it to between 60% and 5% of the norm.

“The results reflect a statistically significant reduction of viral load, and we know from many studies in virology that people will be less likely to transmit if their viral load is lower,” he said, “though it’s hard to estimate at this point to what extent.”