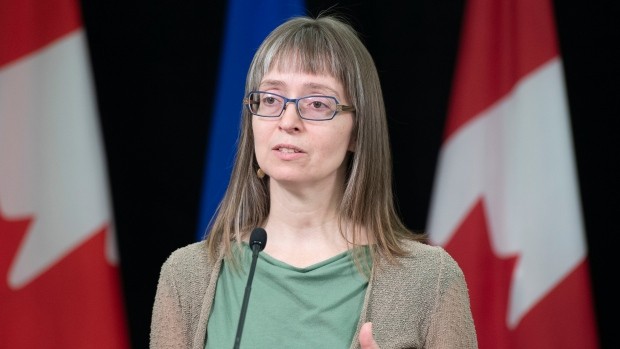 EDMONTON —
Alberta announced 269 new cases of COVID-19 on Monday, including 25 more cases of the variant strain first identified in the United Kingdom.

The positives were found in some 6,200 tests conducted by labs on Sunday, leaving the province with a positivity rate of 4.3 per cent.

The additional variant cases bring the total number of B.1.1.7 cases Alberta has found to 96. Just under half, 46, have not been linked to travel, Chief Medical Officer of Health Dr. Deena Hinshaw told reporters that afternoon.

She confirmed some – but couldn’t say exactly how many – had been hospitalized.

“Right now we’re seeing on average, less than a half a per cent of our cases on any given day coming from variant strains. And some of the cases we reported over this past weekend were cases that had previously been diagnosed and were just screened for variants on the weekend,” she explained.

“It is concerning that we’re finding more of them in the community without links to travel, but some of these are linked to each other so we are seeing some limited outbreaks where we were able, because of our testing protocols, to put in enhanced measures to stop the spread of these variants from moving further. We are at the moment pursuing a containment objective with the variant and so we have put in additional safety precautions.”

The province, Hinshaw also noted, is able to test nearly every positive case for the variant strains that were first found in the U.K. and South Africa.

A week earlier, she announced an Alberta Health Services team had been dedicated to mitigating spread of the variants specifically, and new measures like double testing and stricter isolation requirements for variant cases.

“So it’s not inevitable that the variant strain would become the dominant strain. It really depends, again, on all of us and continuing to work together to prevent the spread.”

There are 432 Albertans in hospital with COVID-19, including 76 who are in ICUs.

There are 313 schools on active alert or outbreak, or about 13 per cent of Alberta schools.

‘TOO SOON TO TALK ABOUT STEP 2’: HINSHAW

With just under 6,200 active cases, the province eased restrictions for restaurants, gyms and youth sports.

The move is the first in a four-stage plan that will see Alberta lift more rules as hospitalizations, growth and transmission rates, and daily case counts fall.

“It’s not just the hospitalization number that matters. It’s also our trends of positive cases positivity,” Hinshaw said during the Monday afternoon pandemic briefing. “If our cases are going up and if they’re starting to increase in a concerning way, then there may be a need to delay any kind of future steps, or we may actually need to take a step backwards depending on those new case trends.”

The stages are separated by a minimum of three weeks so Alberta Health can monitor how the newly opened activities are impacting those metrics.

Hinshaw told Albertans, “It’s too soon to talk about Step 2.”

Twenty-nine thousand Albertans have been fully immunized with two doses of COVID-19 vaccine. More than 120,000 shots have been given in total.

Alberta is set to receive 7,800 doses of the Pfizer-BioNTech product between Feb. 8 to 14. The shipment will be the first from the company in a few weeks as Canada’s supply was delayed while Pfizer expands its Belgium facility.

Don't Miss it COVID-19: All travellers arriving in UK to face mandatory tests from next week | Politics News
Up Next UK insists AstraZeneca vaccine is effective against South African variant of Covid – BBC News