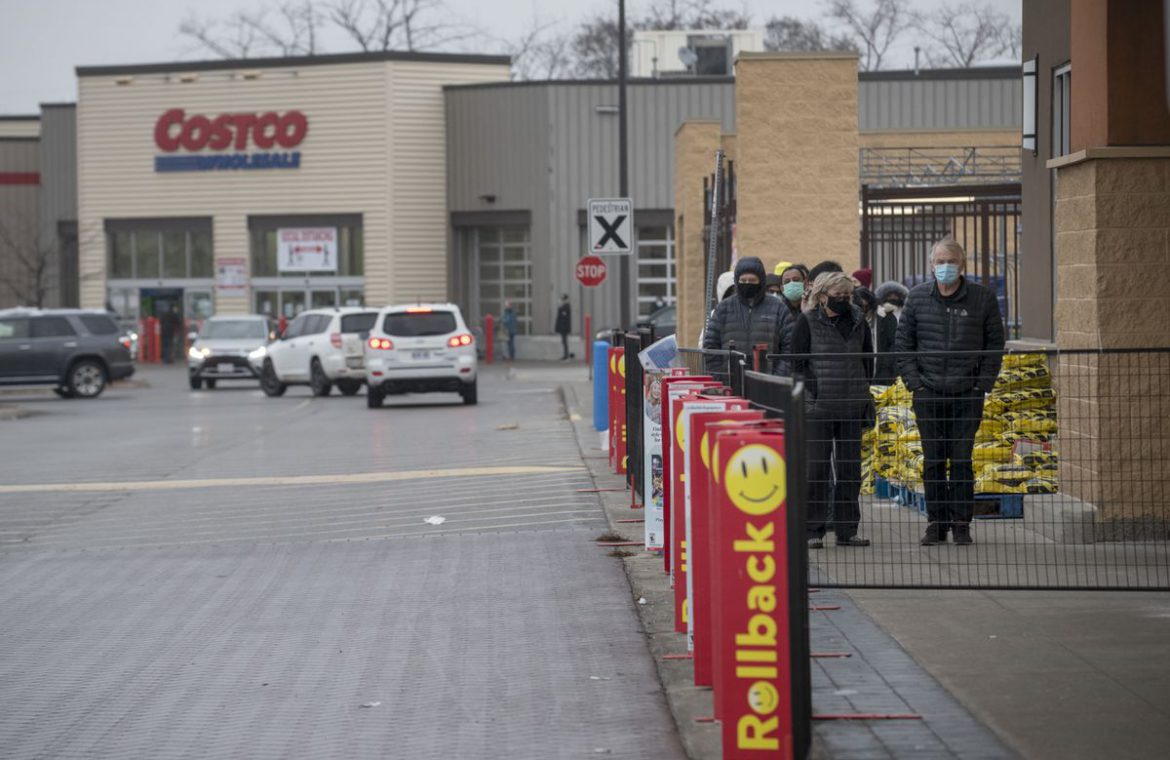 Shoppers line up outside the Walmart Supercentre at the Creekside Crossing Shopping Mall in Mississauga, Ont. on Jan. 12, 2021. The Costco Wholesale store is seen behind the lineup.

Ontario’s own COVID-19 science advisers are warning against the provincial government’s plans to lift its stay-at-home order, as new modelling shows more contagious variants of the virus could cause 5,000 to 6,000 infections a day by the end of March.

Adalsteinn (Steini) Brown, dean of the Dalla Lana School of Public Health at the University of Toronto, said Thursday that an aggressive vaccination campaign and “sticking with the stay-at-home order” are needed to help avoid a third wave and a third lockdown.

The stark predictions followed word from Ontario’s Minister of Education, Stephen Lecce, that he was postponing March Break for schools until April 12. The move, meant to curb the spread of COVID-19 among children travelling or mixing outside classrooms, is opposed by teachers unions and the Opposition NDP, who say educators and students need time off.

But according to numbers from Dr. Brown and the researchers on the government’s pandemic science advisory table, the Ontario COVID-19 picture could look very different by March – even as the virus’s second wave appeared to continue to recede and the province reported fewer than 1,000 new cases on Thursday.

The modelling suggests that while cases and deaths are slowing for now, the new variants first found in Britain will cause infections to rebound – potentially exponentially – as early as the end of this month, threatening to send more patients into the province’s already strained hospitals.

Dr. Brown said numbers he saw just Thursday morning appear to show the decrease in daily cases in Ontario already stalling, likely because of the rapid growth in variant cases thought to now make up 5 to 10 per cent of infections.

When the variant became the dominant strain of the virus in Britain, Dr. Brown said, it caused cases to triple in just a month and put its health care system into acute crisis, forcing nurses to care for four times as many patients as usual and killing more than 1,000 people a day.

Premier Doug Ford announced this week that Ontario would lift its stay-at-home order in most of the province on Feb. 16 and in hot spots Toronto, Peel Region and York Region on Feb. 22, moving back to the province’s colour-coded framework to delineate different levels of restrictions in different regions.

But to control the new variant, Dr. Brown said, Ontario would have to reduce the virus’s reproduction rate to a level even lower than the province has achieved with its current harsher lockdown.

“The cases will likely rise, given the variants of concern,” Dr. Brown said when asked if the numbers, and the government’s reopening, would make for a disaster. ” … There are a number of things that need to be weighed in making these decisions.”

“While we are going back into the framework, this is not an opening up,” Dr. Williams said, arguing the system still includes an array of public-health restrictions and that regions can be put into lockdown if conditions worsen.

He also said that Ontarians should still follow the public-health advice and leave home only when necessary: “We may be stopping the stay-at-home order, but we still want people to stay at home.”

However, returning to the colour-coded framework does mean a loosening of pandemic rules across the province. The province has also further eased the framework’s restrictions to allow non-essential retailers to reopen for in-person shopping even in its strictest “grey/lockdown category,” but with stores limited to 25 per cent of their capacity.

Dr. Williams said he would announce on Friday the colour levels for the regions entering the framework on Feb. 16.

Local health officials in Toronto, Peel, Niagara and Simcoe-Muskoka have said the reopening is too hasty, given the uncertainty around the spread of new, more contagious variants of the virus.

Some say they may use their powers under health legislation to reimpose their own local restrictions once the overall stay-at-home order is lifted, as Toronto and Peel did last fall when the province eased restrictions at that time. Dr. Williams said he welcomed these kinds of local moves.

Joe Cressy, the Toronto city councillor who chairs his city’s board of health, said Toronto officials were in talks with the province, and officials from surrounding regions, about delaying the Feb. 22 lifting of the stay-at-home order in Toronto.

In contrast, York Region Council voted on Thursday to ask the province to slot it into the red or second-highest level of restrictions, which would allow both retail and restaurants to reopen with capacity limits in place.

Opposition NDP Andrea Horwath said the new modelling shows the province’s reopening plan will only cause a dangerous third wave of the virus.

“It’s clear that Ontario is on the brink. We are at a crossroads. We can save ourselves by continuing public-health measures for a little while longer, or we can reopen too soon and allow the variant to take hold and run rampant,” Ms. Horwath said in a statement.

Ontario Education Minister Stephen Lecce says March break will be postponed until the week of April 12th. The Canadian Press

With a report from Laura Stone