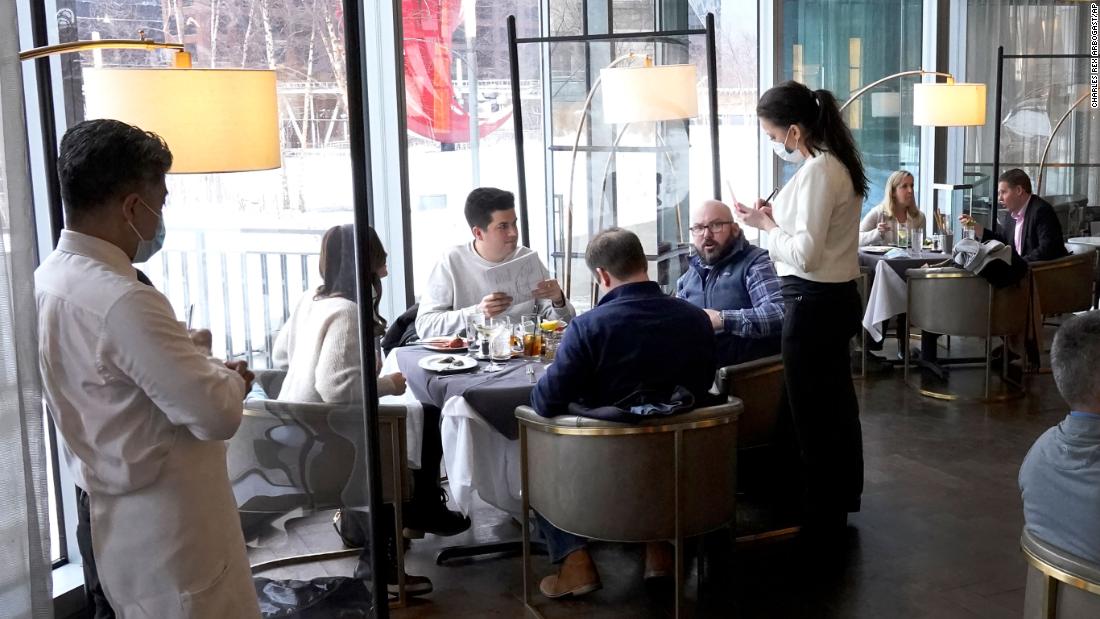 The director of the National Institute of Allergy and Infectious Diseases told NBC’s “Today” show that he believes the pace of vaccination will pick up going into March and April.

More doses should be available daily by then, he said. And he said he was “fairly certain” that toward the end of April, pharmacies, community vaccine centers and mobile units will help pick up the pace — and not just for those in higher priority groups.

“I would imagine by the time we get to April, that will be what I would call for, you know, for better wording, open season,” Fauci said. “Namely, virtually everybody and anybody in any category could start to get vaccinated.”

Pfizer’s trial in children ages 12-15 is fully enrolled with 2,259 participants. The company said it hopes to have results “in the early part of 2021 and from there, we will plan to finalize our study in 5-11 year olds.”

Moderna is still enrolling participants in its trial in children ages 12-18, and has plans to start studying its vaccine on even younger children between 6 months and 11 years old.

“I would think by the time we get to school opening, we likely will be able to get people who come into the first grade,” Fauci told ProPublica.

Fauci has previously said the Americans had a chance of living a little more normally by early fall, assuming 70% to 85% of the US population was vaccinated by end of summer.His comments Thursday came as some states have complained vaccine demand has exceeded supply. States initially raced to vaccinate priority populations — often health care workers and people in long-term care facilities — followed by seniors and/or essential workers.More than 34.7 million people in the US had received at least their first dose of a Covid-19 vaccine as of Thursday morning, CDC data shows, while more than 11.1 million people have received two doses.

But Pfizer/BioNTech and Moderna have indicated their weekly output should pick up.

And Johnson & Johnson would add to the country’s supply if the Food and Drug Administration authorizes its one-dose candidate. The company has said it could provide 20 million to 30 million doses by the end of April if the authorization comes.Meanwhile, more pharmacies nationwide will start providing the shots by appointment starting Friday, and some experts have suggested pharmacies eventually could administer 100 million doses a month, assuming adequate supply.

More states are loosening Covid-19 restrictions, despite warnings about variants

Meanwhile, more states are loosening Covid-19 restrictions, even as experts warn the US is not in the clear as more-transmissible variants are increasingly appearing across the country.

Montana Gov. Greg Gianforte signed a bill on Wednesday shielding businesses and houses of worship from legal liability for Covid-19 transmission as long as they take measures to follow public health guidelines, and announced he would not extend the statewide mask mandate.

“The mask mandate will expire on Friday,” the governor said, adding, “Since we’re not out of the woods yet, I will continue to wear a mask, and I will encourage all Montanans to do the same.”

Chicago officials said Wednesday indoor service at bars, restaurants and events can expand to the lesser of 25% capacity or 50 people per room or floor. The measure, which will be effective Thursday, comes as part of a broader plan to slowly ease Covid-19 restrictions in the city. New York Gov. Andrew Cuomo announced that stadiums and arenas with more than 10,000 seats can reopen starting February 23, with approval from the state’s health department — with heavy restrictions. The Barclays Center in Brooklyn has already been approved to open that day for the Brooklyn Nets’ NBA game against the Sacramento Kings.

However, New York’s stadiums must limit capacity to 10%; they must ensure all staff and spectators received a negative Covid-19 PCR test within the last 72 hours; and they must mandate face coverings and assigned, socially distanced seating.

“While we continue to fight Covid on multiple fronts, we must also get this economy re-opened intelligently and in a balanced way,” Cuomo said.

In New Mexico, Gov. Michelle Lujan Grisham said the state will drop its mandatory-quarantine rule for people coming from “high-risk” states, attributing the policy change to a “cautiously brighter pandemic outlook after several months of unsustainable strain on the state’s health care system.”

Dr. Barney Graham, chief of the lab and Deputy Director of the Vaccine Research Center at the National Institutes of Health, told President Joe Biden Thursday that the current coronavirus vaccines should work against variants of the virus.

“It is absolutely essential that we continue to do steps beyond vaccination to keep this under control,” Besser said. “The more this virus is allowed to spread in our communities, the more we’re going to see these variants spreading.”

Cases, hospitalizations and deaths are dropping, for now

The CDC has said a more transmissible variant first identified in the United Kingdom could be dominant in the US in March, and could worsen virus spread.

For now, however, the rates of new Covid-19 cases and deaths, and the numbers of Covid-19 patients in hospitals, are dropping after holiday-era surges:

— Hospitalizations: More than 76,900 Covid-19 patients were in US hospitals on Wednesday — the lowest total since November 16, according to the COVID Tracking Project. The number has been below 100,000 for 12 straight days.

— Deaths: The country has averaged 2,779 Covid-19 deaths a day over the last week — down from the nation’s peak average of 3,363 in mid-January, Johns Hopkins data shows.

— The national test positivity rate — or the percentage of tests taken that turn out to be positive — now averages 6.49%, according to the COVID Tracking Project.

That’s down from a winter peak of around 13.6% in early January. But the World Health Organization has recommended governments not reopen until the test positivity rate is 5% or lower for at least two weeks.

An ensemble forecast published Wednesday by the CDC projects the US could see another 68,000 virus-related deaths by March 6, adding to the more than 471,700 already recorded.

Which states are digging for variants

So far, more than 940 cases of Covid-19 variants first detected in the UK, South Africa, and Brazil have been reported in the US, according to CDC data. But the number likely doesn’t represent all of the variant cases in the country, experts have cautioned. While the US is ramping up its genome-sequencing efforts to be able to hunt for the variants, it still lags far behind many other developed nations. “I think once we have more sequencing that’s happening, we’ll have a better idea as to how many variants there are and what proportion are out there,” CDC Director Dr. Rochelle Walensky said earlier this week.

But only eight states have genetically sequenced more than 1% of their total Covid-19 cases during the pandemic — compared to the national average of just under 0.4%, according to CDC data.

Eighteen states have sequenced less than 0.1% of their confirmed Covid-19 cases.