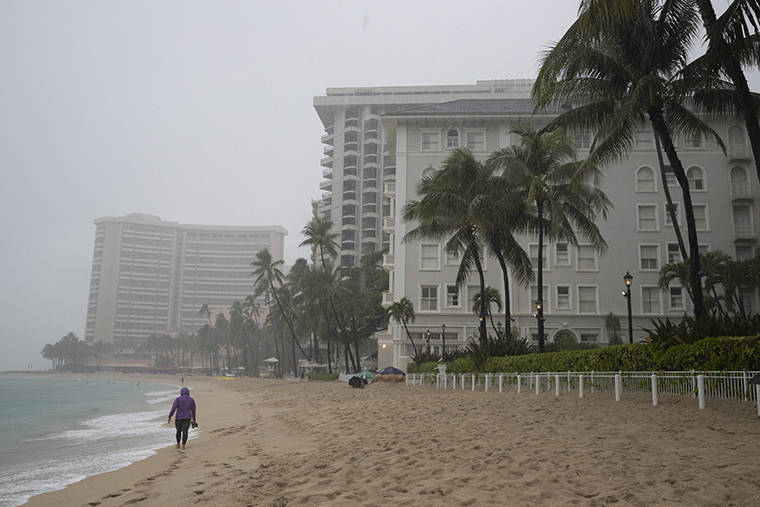 Hawaii Department of Health officials today reported 71 new coronavirus infections, bringing the state’s total since the start of the pandemic to 26,810 cases.

The state’s official coronavirus-related death toll includes 338 fatalities on Oahu, 53 on Hawaii island, 29 on Maui, one on Kauai, and three Hawaii residents who died outside the state.

The U.S. coronavirus-related death toll is more than 483,000 today as the nationwide tally climbed to 27.5 million.

Today’s new statewide infection cases reported by the Health Department include 48 on Oahu, 11 on Maui, two on the Big Island, and 10 residents diagnosed outside of Hawaii, officials said.

The statistics released today reflect the new infection cases reported to the department on Thursday.

The total number of coronavirus cases by island since the start of the outbreak are 21,561 on Oahu, 2,213 in Hawaii County, 1,936 on Maui, 179 on Kauai, 108 on Lanai and 26 on Molokai. There are also 787 Hawaii residents who were diagnosed outside of the state. As a result of updated information, one case from Maui, one case from Lanai and two cases from Oahu were removed from the counts.

Health officials also said today that of the state’s total infection count, 983 cases were considered to be active. Officials say they consider infections reported in the past 14 days to be a “proxy number for active cases.” The number of active cases in the state decreased by 51 today.

By island, Oahu has 703 active cases, Maui has 216, the Big Island has 59, Kauai has two, Lanai has two, and Molokai has one, according to the state’s latest tally.

Four hospitalizations in the statewide count are Hawaii residents who were diagnosed and treated outside the state. Of the 1,788 hospitalizations within the state, 1,564 have been on Oahu, 111 on Maui, 100 on the Big Island, seven on Kauai, five on Lanai and one on Molokai.

According to the latest information from the department’s Hawaii COVID-19 Data dashboard, a total of 45 patients with the virus were in Hawaii hospitals as of Friday morning, with 16 in intensive care units and 12 on ventilators.

Health officials said that as of Sunday, 218,997 vaccines have been administered of the 288,050 received by the state. Of the administered vaccines, 201,553 were given to the general public and 17,444 were distributed through the federal pharmacy program, officials said. As of Sunday, nearly 11% of the general population of Hawaii, and 47% of residents age 75 and older, have received at least one dose, they said. State officials release the verified updated vaccination numbers each Wednesday.

Oahu moved to the less-restrictive Tier 2 of Honolulu’s four-tier economic recovery plan on Oct. 22. To gauge whether Honolulu will move to a different tier, the city takes a “weekly assessment” of two key COVID-19 numbers each Wednesday. To move to Tier 3 from Tier 2, the 7-day average of new cases must be below 50 on two consecutive Wednesdays. Also, the 7-day average positivity rate must be below 2.5% on those two Wednesdays.

Today’s seven-day average case count for Oahu is 39 and the seven-day average positivity rate is 1.3%, according to Honolulu Mayor Rick Blangiardi. The mayor announced Friday Oahu will remain in Tier 2 through March 15 unless the county’s metrics move it to another tier.

This breaking news story will be updated as more information becomes available.

Don't Miss it Socially distanced dining in a bubble above Seattle – BBC News
Up Next Coronavirus: Victoria celebrates one week of no cases, no deaths, NSW also records zero | ABC News