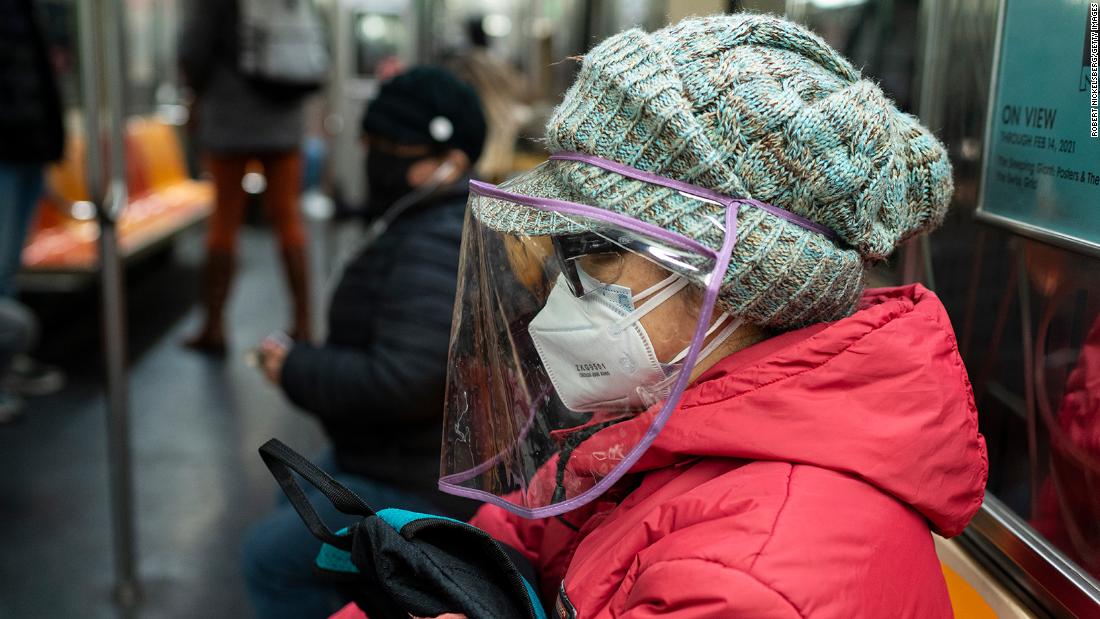 “It’s what we’re doing right: staying apart, wearing masks, not traveling, not mixing with others indoors,” said Dr. Tom Frieden, former director of the US Centers for Disease Control and Prevention.

After widespread holiday gatherings and travel, the US shattered its records for daily new infections, hospitalizations and deaths in early January.

Since then, Covid-19 cases and hospitalizations have gradually dropped. Doctors say there are several reasons why:

“One, we came off of really high numbers from the holidays,” said Dr. Ashish Jha, dean of the Brown University School of Public Health.

“Second, there is pretty good evidence that people are doing a better job of social distancing and mask wearing,” he said.

Where the US stands now

The seven-day average of daily new cases is now 90,416 — down from a peak of about 250,000 in early January, according to Johns Hopkins University.

As of Sunday, 67,023 people were hospitalized with Covid-19 — about half the record-high of 132,447 set on January 6, according to the COVID Tracking Project.

But Covid-19 deaths are still painfully high. More than 42,500 Americans have died from Covid-19 in just the past two weeks. That’s an average of more than 3,000 lives lost every day.

“We’ve had three surges. Whether or not we have a fourth surge is up to us,” Frieden said.

“And the stakes couldn’t be higher — not only in the number of people who could die in the fourth surge, but also in the risk that even more dangerous variants will emerge if there’s more uncontrolled spread.”

“It’s encouraging to see these trends coming down, but they’re coming down from an extraordinarily high place,” CDC Director Dr. Rochelle Walensky told NBC on Sunday.

“If we want to get our children back to school, and I believe we all do, it all depends on how much community spread is out there,” she said.

“We need to all take responsibility to decrease that community spread, including mask wearing, so that we can get our kids and our society back.”

Variants in the US include homegrown strains

More than 1,100 cases of the highly contagious B.1.1.7 variant, first spotted in the UK, have been reported in 39 US states, according to the CDC. About a third of the cases were reported in Florida.The troubling B.1.351 strain, first detected in South Africa, has been found in 17 US cases. That strain is concerning because some vaccines may be less effective against it. Now, researchers have identified a batch of worrisome mutations in US samples that also appear to make the virus more transmissible. Those mutations all affect the same stretch of the spike protein — the knob-like extension of the virus that’s used to dock onto the cells it infects, researchers wrote in a pre-print report that has not yet been peer reviewed. But so far, these mutations appear to be “relatively rare” so far, one of the researchers said.

Public health experts say the US is now in a race to vaccinate as many Americans as possible before coronavirus strains keep spreading and mutating further.

In Washington state, officials said appointments for the first dose will be “extremely limited” this week as the state will focus on administering second doses.

“We are monitoring the distribution of doses closely and making adjustments as needed,” Secretary of Health Umair A. Shah said.

“While the limited availability of first doses will be challenging this coming week, focusing on second doses will help pave the way for an improved and more sustainable allocation of vaccines in future weeks.”

In San Francisco, officials said high-volume vaccination site will pause for a week and will reopen “once supply is sufficient to resume operations.”

A second high-volume site expects to resume vaccinations Friday — but only for second doses. A third high-volume vaccine site is set to launch this week, but “with available appointments far below full capacity,” officials said in a news release Sunday.

“The City has the capacity to administer more than 10,000 vaccines per day but lack the vaccine supply,” they added.

Several of Los Angeles’ Covid-19 vaccination sites were forced to temporarily close because of a lack of vaccine doses.

Washington state and California are far from alone in their struggles. Officials have said supply will likely remain a challenge for a while, and experts say vaccines will likely not be widely available to the American public until late spring or summer.

“By the end of the summer, we will have enough vaccine in order to vaccinate the entire US population that is eligible,” Walensky, the CDC director, told Fox News on Sunday.

The agency’s guidelines did not list vaccination as a “key” strategy for opening schools, focusing instead on measures like masks and physical distancing, among others. Vaccinations for staff and teachers are “an additional layer of protection,” Walensky has said.

On Sunday, Walensky told CNN that while vaccination for teachers is not a prerequisite for reopening schools, current CDC guidance does say those who are at higher risk should have virtual options.

“I’m a strong advocate of teachers receiving their vaccinations,” Walensky said. “But we don’t believe it’s a prerequisite for schools to reopen.”

“If we want students to be in school for in-person learning, the least that we can do is to protect the health and well-being of our teachers,” Wen said.

She said teacher vaccinations are especially important because “in so many parts of the country, teachers are already being made to go back to school in poorly-ventilated, cramped areas, with many students who may not always be masking and practicing physical distancing.”