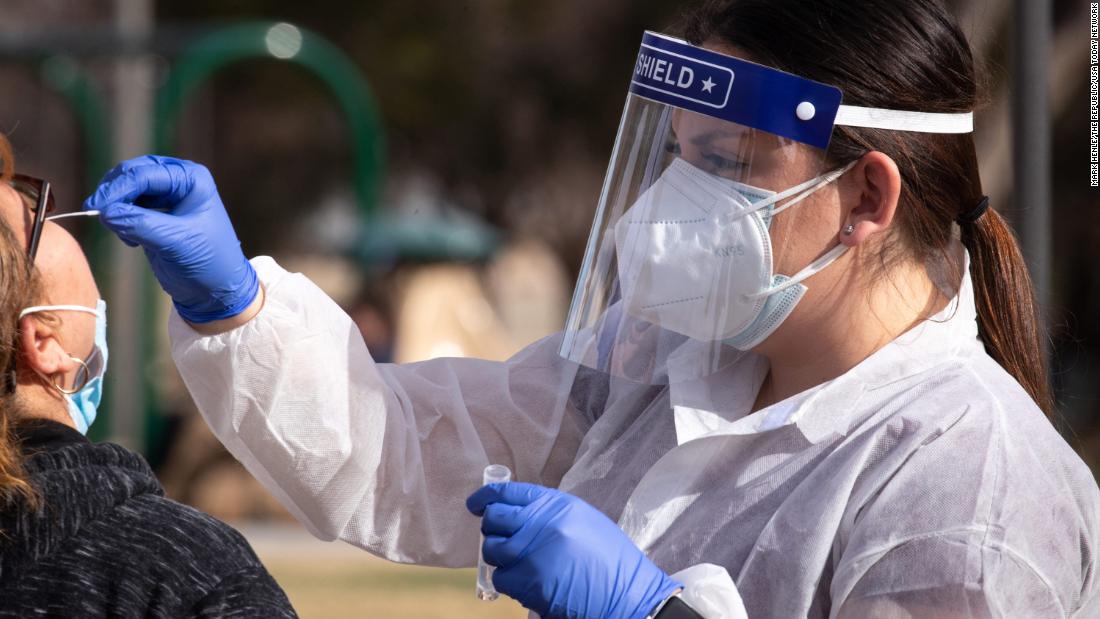 Fauci, director of the National Institute of Allergy and Infectious Diseases, acknowledged that previous estimates had placed vaccine availability for the general public — or nonessential workers under 65 with no health conditions — closer to the end of April.

“If you start talking about when the vaccine would be more widely available to the general population, I was hoping that that would be by the end of April, namely, have gone through all the priorities and now say, OK anyone can get it,” Fauci said. “That was predicated on J&J, the Johnson product, having considerably more doses than now we know they’re going to have.”

Johnson & Johnson will have fewer than 10 million vaccine doses available if the US Food and Drug Administration authorizes it for emergency use in the coming weeks, a federal health official told CNN earlier this month.

“So, that timeline will probably be prolonged, maybe into mid- to late May and early June, that’s fine,” Fauci said.

He downplayed the shifted expectations and noted that there will be several months between when vaccinations are generally available and when each person will individually be able to access one.

“You can say, let’s say in May, vaccines are going to be widely available to almost anybody May, June, but it may take to June, July and August to finally get everyone vaccinated,” he said. “So when you hear about how long it’s going to take to get the overwhelming population vaccinated, I don’t think anybody disagrees that that’s going to be well to the end of the summer and we get in the early fall.”

Fauci’s comments come as the US on Monday reported more than 53,800 new Covid-19 infections: its lowest daily case count since October and a vastly different number from those plaguing the country just last month, when infections were topping 200,000 a day.

Statistics across the US are now reflecting more encouraging trends. California, one of the states hit hardest by the pandemic, reported its lowest daily case increase since early November.

That comes amid a steady decline not only in new infections but also in hospitalizations as well.

Why cases and hospitalizations are dropping

The sharp drop in cases is due to a combination of the end of the post-holiday surge, increased preventive measures like masks and distancing and the tens of millions of previously infected people who now have a level of natural immunity.

Vaccines, too, are increasingly going into arms and limiting the virus’s ability to find new hosts. The US has administered more than 55 million vaccine doses so far and is averaging about 1.7 million doses administered every day, a number that has been steadily increasing.

“It’s hard to know, but I do think that one possibility is you’re starting to see the first evidence of herd immunity,” said Dr. Paul Offit, director of the Vaccine Education Center at the Children’s Hospital of Philadelphia.

During a call with governors, White House Covid-19 coordinator Jeff Zients informed the officials that the administration is “increasing the vaccine supply to 13.5 million doses per week to states,” Psaki said at Tuesday’s briefing, a 57% increase from inauguration levels.

Additionally, Psaki said, the administration will be “doubling the supply to our pharmacy program.” This week, there will be 2 million doses sent to pharmacies across the country, she said, which is expected to expand in the coming weeks.

Even as the Covid-19 data is heading in the right direction, tens of thousands of people continue to become newly infected with the virus every day. And experts worry that if Americans let their guards down — especially now with variants circulating — there could be another surge coming.

“The only thing that I’m concerned about now, is that we do have this UK variant … and it seems to be accelerating in the United States,” Dr. Peter Hotez, dean for the National School for Tropical Medicine at the Baylor College of Medicine, told CNN on Monday.

CDC data shows more than 1,100 cases of the highly contagious B.1.1.7 variant — first detected in the UK — have been reported in the US. The agency has previously warned the strain will see rapid growth in early 2021 and will likely become the predominant variant by March.

“I think we should be assuming that the next wave of case growth, to the extent that we have it, is going to be with B.1.1.7, and that’s something that I think everybody has to be even more cautious about,” Andy Slavitt, White House Covid-19 senior adviser, said on MSNBC on Monday. “It’s nice to see the numbers of cases drop, but it could be misleading.”

And while officials are working to get more Americans vaccinated, winter storms are now delaying the process in parts of the country.

In Texas, Dallas County officials announced they were closing the Fair Park vaccination site through Wednesday because of severe weather.

“We understand the urgency to administer second doses of the vaccine, but we must also balance people’s safety,” officials said in a news release. “As soon as we can safely open again, we will.”

Missouri Gov. Mike Parson said mass vaccination events planned through Friday were canceled due to severe weather that “makes driving dangerous and threatens the health and safety of anyone exposed to the cold.”

In Kentucky, Gov. Andy Beshear said that while the weather “is going to slow down our vaccinations,” he hopes the state will be able to make up for the delays next week.

The storms caused disruptions as states continue to grapple with other vaccine challenges, including short supply and distribution inequities.

Georgia Gov. Brian Kemp said on Monday that while progress on vaccine hesitancy and equity among members of the Latino community was “encouraging,” the state was still seeing a “substantial disparity in vaccine administration between Hispanic and non-Hispanic communities.”

He added the state still needed more supply from the federal government to be able to meet the growing demand.

“When we get to that point when we can expand the supply and we have that supply, we need people to be comfortable taking the vaccine,” the governor said.