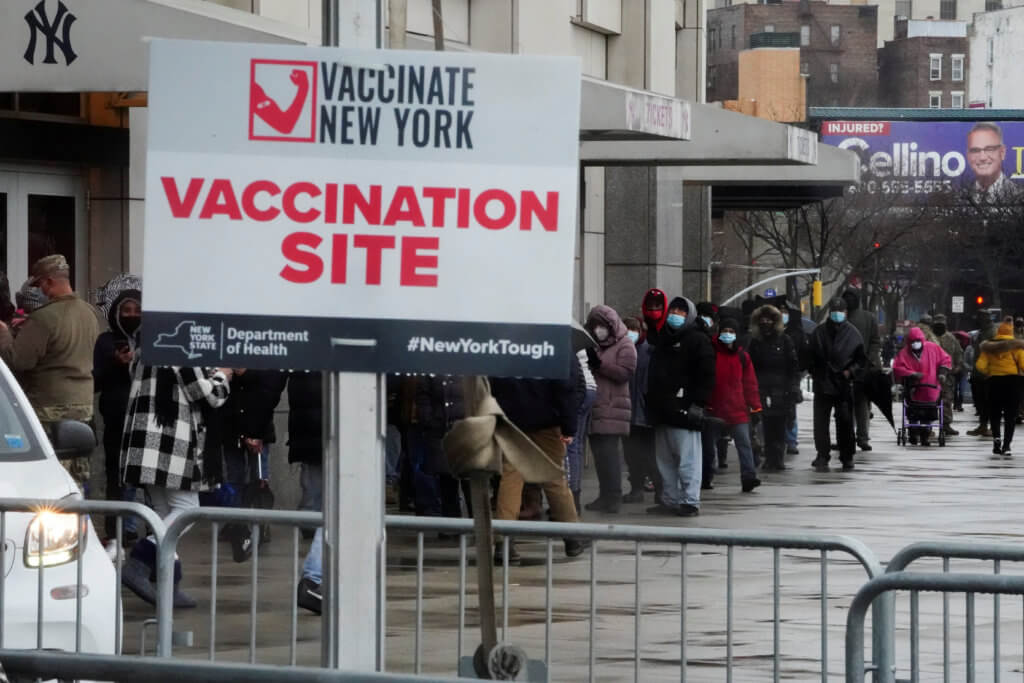 When Mayor Bill de Blasio began his daily press conference Thursday, Martin Van Buren High School in Queens, was less than 24 hours away from opening its doors as one of the city’s newest vaccination sites.

But as yet another snowstorm fell on New York City Thursday morning, the mayor was given some unfortunate news mid-press conference – the city’s weekly supply of the COVID-19 vaccine had been delayed and the opening of the new site would have to wait.

The city’s weekly supply of the life-saving vaccine was further delayed Thursday because of the storm, which is supposed to drop 3 to 5 inches of snow throughout the five boroughs by Friday afternoon, according to the mayor. Shipments that normally arrive on Tuesday or Wednesday, have been pushed back until the weekend, delaying the opening of the Queens Village high school vaccination site until at least Sunday, Feb. 21.

“[Vaccine distribution] has been hand to mouth in general, but it’s been made worse by the storm,” de Blasio said.

Despite the delays, a second new vaccination site, Empire Outlets in Staten Island, will open on Friday, Feb. 18. The site was originally supposed to open on Thursday.

Make it a double

Following guidance from the Centers for Disease Control, city leaders are urging New Yorkers to wear two face coverings, instead of one.

The double-mask approach – wearing a cloth mask over a disposable mask – ups protection against the spread of the coronavirus by eliminating some gaps between a person’s face and the covering, while also creating an additional layer fabric to filter out droplets potentially carrying the virus.

“The simple act of wearing a mask has been a revelation,” de Blasio said. “It’s become as typical to people in this city as getting a coffee or bagel in the morning. We got to keep doing it.”

Dr. Dave Chokshi, the city’s health commissioner who recently got over a case of COVID-19 himself, added that elderly people, folks working with people exposed to the virus and people with underlying health conditions should upgrade to higher protection masks, like the N95.

On Thursday, the city’s COVID-19 positivity rate, calculated on a 7-day average, stood at around 7.17%.

De Blasio doubled down on his promise to vaccinate 5 million New Yorkers by June even has he repeated pleas for a greater supply of the vaccine.

The city has also continued its push to bring information about the vaccine – including where and how to get it – to residents’ front doors.

The city’s Test and Trace Corps has around 250 canvassers spread throughout the city and focused specifically on public housing, signing elderly people and non-English speaking New Yorkers up for vaccine appointments.

However, the effort to make vaccine appointments more accessible online still has a long way to go.

Despite attempts to improve the city’s online capacity, the creation of a central website where people can go to find all available vaccine appointments in New York City may never come to fruition.

“I don’t want to give the false hope that we can get all these companies on the same page,” de Blasio said. “Getting them all to do the same thing, that’s not happening.”

Don't Miss it Adelaide Fringe 2021 set to open as organisers ‘pivot’ to manage COVID-19 woes
Up Next COVID-19: Northern Ireland’s lockdown extended to 1 April – but some children to return to school earlier | UK News