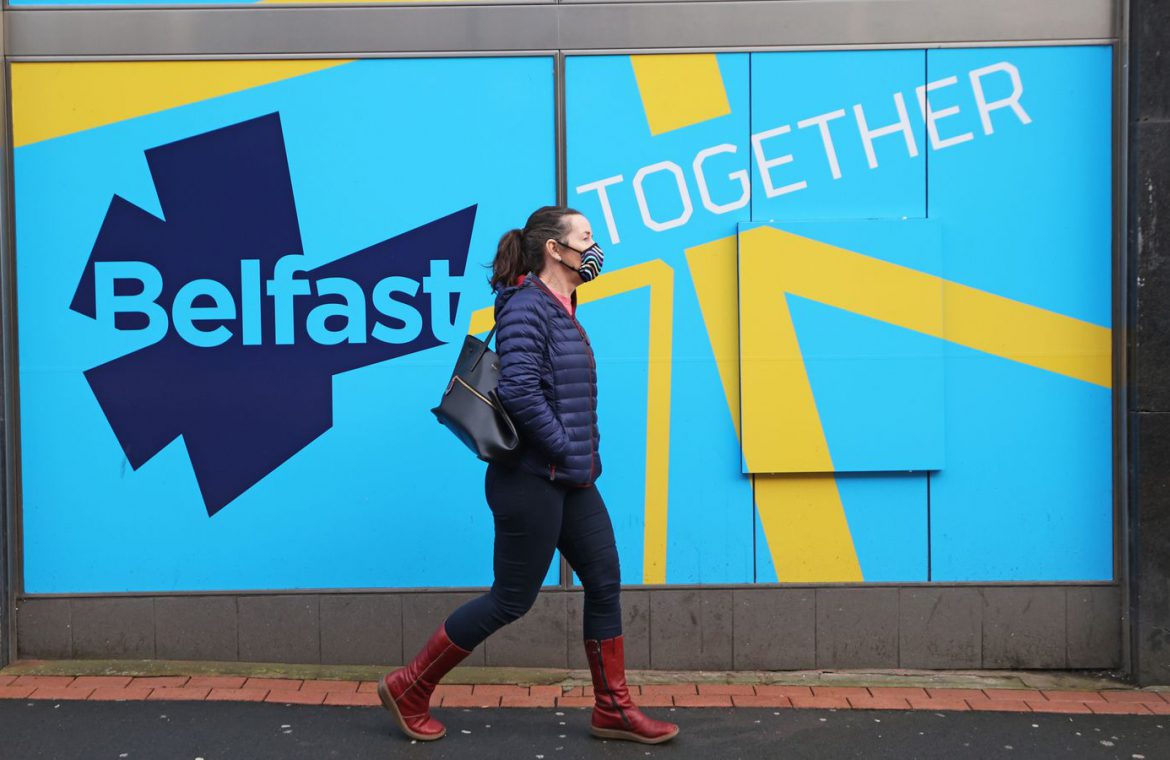 Northern Ireland’s lockdown will be extended to 1 April but some children will return to school earlier, First Minister Arlene Foster has confirmed.

Speaking at a news conference, Mrs Foster said the Northern Ireland Executive had decided that “a full lifting of the current restrictions is not possible at this point”.

The Executive had “reluctantly” accepted the advice of scientists that coronavirus measures needed to be in place for longer, she added.

But while the current lockdown measures would remain in force for a number of weeks yet, Mrs Foster said there would be a relaxing of some rules prior to 1 April.

Image:
Northern Ireland’s lockdown will remain in place until 1 April

Under the phased return of schools:

from 8 March pre-school, nursery and primary school pupils in year groups P1 to P3 will return to face-to-face learningon 22 March, secondary pupils who will be awarded qualifications this summer – year groups 12 to 14 – will return to schoolbut pre-school, nursery and P1 to P3 pupils will go back to remote learning for a week on 22 March – for the week prior to the Easter holidays – to minimise the impact on infection rates of years 12-14 returningthe Executive intends for all other students to return to classrooms as soon as possible after the Easter holidays.

Health officials advised ministers that having primary school pupils and older youths in school at the same time could impact the infection rates.

Only vulnerable children and those of key workers have been in classrooms in Northern Ireland since January.

At a meeting on Thursday, the Executive also agreed:

to relax the rules on outdoor gatherings, with groups of 10 or more from up to two households able to gather in parks or other outdoor public spaces from 8 Marchto allow click and collect for shops selling baby equipment, clothing, footwear, and electrical goods from 8 March.

Mrs Foster promised a full review of the main lockdown restrictions on 18 March, with a “continual review on an ongoing basis” in the meantime.

The Executive will publish a “decision-making framework” for Northern Ireland’s exit from lockdown on 1 March, she added.

Sky News Senior Ireland correspondent David Blevins said that ministers are determined not to make the same mistake they made at Christmas by lifting lockdown just before Easter.

They warned the public that these were “baby steps” and they should not make any great plans for Easter weekend.

And Northern Ireland is “on the verge” of having given a first vaccine dose to 30% of its adult population, she added.

Yet, despite Northern Ireland being “past the peak of this period of infection”, Mrs Foster admitted there was still “significant concern” about community transmission of the virus.

“The decisions facing the Executive today have not been straightforward, there are many factors that have been assessed and balanced,” she said.

“But what is clear is we must proceed with great care and with caution. We need our decisions to be both safe and sustainable.

“And I’m determined through the proper sequencing of actions, as we emerge from these restrictions, that we leave lockdowns in the rear view and that we do not step backwards again.”

The first minister added: “We believe the best way to win this stage of our battle against COVID-19 is to dig in and to secure the position we hold, and then to slowly move forward.”

Finance minister Conor Murphy urged people in Northern Ireland not to make plans for the Easter weekend, despite the lockdown extension ending on Holy Thursday.

“The advice would not be to book anything for Easter weekend,” he said.

“I would advise people not to be looking at 1 April as the date that everything will be opening up again.”

Commenting on the reopening of services for some non-essential shops, economy minister Diane Dodds said: “This is a cautious but welcome step.

“Contactless click and collect services provide a measure of protection to our smaller independent businesses while at the same time easing footfall within larger retail outlets.”

Don't Miss it Another snowstorm creates COVID-19 vaccine delays; New Yorkers advised to double up on masks
Up Next Despite a better understanding of airborne coronavirus transmission, health department advice online hasn’t changed since March 2020