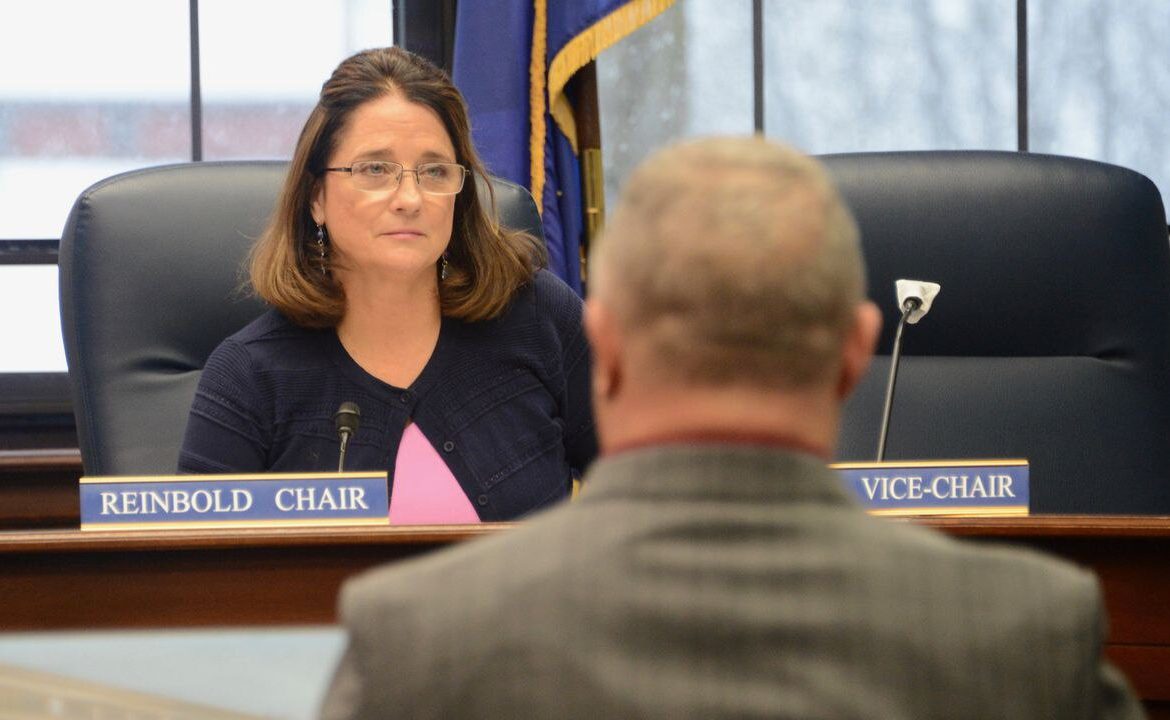 JUNEAU — Gov. Mike Dunleavy delivered a blistering letter to the head of the Senate Judiciary Committee on Thursday, accusing Eagle River Republican Sen. Lora Reinbold of violating ethics rules and her oath of office by repeatedly spreading misinformation about Alaska’s response to the COVID-19 pandemic.

Dunleavy said that in response to Reinbold’s recent actions, state officials and staff “will not be responding, or participating, in any matter that pertains to yourself, your office, or, currently, in your capacity as the chair of a committee. The resources of the State of Alaska are not yours to abuse for your own, as yet undiscernible, personal benefit.”

Asked about the letter, Reinbold responded in a series of text messages, calling the governor’s action “inappropriate” and an “unnecessary political assault upon a long-term, hardworking member of the Legislature.” She said Dunleavy was “acting like a disgruntled minority legislator, not a governor.”

“Never in my life, and never in the history of this Legislature has anything like that ever happened,” he said.

The letter describes a pattern of misinformation by Reinbold, citing her Facebook posts as far back as October 2020.

“You have used your position as a member of the Alaska State Senate to publicly misrepresent the state of Alaska’s response to a global health crisis. You impugned the motivations of unelected and non-political employees working for the state of Alaska with baseless allegations that, on multiple occasions, were demonstrated to you to be false,” the letter said.

“You deceived the people of Alaska about their government’s response to the largest public health crisis in a century. In doing so, you violated the obligation you have, as a member of the Legislature, to promoting and protecting public health,” the letter said.

The letter arrived amid growing objections to the actions of the Reinbold-led committee, which has encouraged testimony from people skeptical of efforts to restrict the spread of the coronavirus.

On Friday, the committee had been scheduled to hear from Dr. Simone Gold, a physician who last month was indicted in connection to the Jan. 6 invasion of the U.S. Capitol. Gold is a founder of America’s Frontline Doctors, a group organized to oppose efforts to contain the spread of COVID-19.

Senate President Peter Micciche, R-Soldotna, said he personally canceled Friday’s meeting and said the Senate’s majority caucus will meet on Monday to decide next steps, if any. Micciche previously said the Senate’s 14-member majority does not leash committee chairs.

“We have some very spirited people in this organization, and we want them to sort of run their meetings as they see fit,” he said in early February when asked about Reinbold’s committee.

“This takes it to a new level. This makes it difficult to ignore,” Micciche said. “We’re definitely going to be meeting on Monday morning to talk a path forward.”

Even before Thursday, Reinbold’s actions had been drawing attention.

On the day that the Centers for Disease Control and Prevention released a new study about the effectiveness of double-masking against COVID-19, Reinbold invited testimony from someone who incorrectly claimed that masks do not prevent the spread of COVID-19.

“The presenters sometimes say things that really put my eyebrows so high that they’re into my hairline, and my hairline’s receding,” said Sen. Jesse Kiehl, D-Juneau and the minority member of the committee.

The week before the mask testifier’s claims, a political writer was temporarily banned from Twitter for repeating an incorrect statement Reinbold made about the COVID-19 vaccine. The social media site’s automation thought the comment was spreading “misleading or potentially harmful information about COVID-19.”

Reinbold said by text message that she has “not had a single official complaint from anyone from Judiciary hearings. The Senate president has complimented me over and over for running good hearings.”

She has previously said she is “not an anti-vaxxer,” but on her official Facebook page, she has emphasized reports of problems with the COVID-19 vaccine, repeating an incorrect claim that five people in Alaska have died because of it.

There have been no deaths and only two allergic reactions, Dr. Anne Zink, Alaska’s chief medical officer, told Reinbold during a Feb. 4 hearing of the Senate Health and Social Services Committee.

In a Feb. 5 hearing of the Judiciary committee — and on some occasions since — Reinbold has questioned whether Alaska’s now-expired COVID-19 health mandates amount to martial law.

Asked about that claim during a news conference last week, Dunleavy bristled at the insinuation that he would even consider the idea.

“When you hear somebody saying that we’re declaring martial law, that we’re looking at forced vaccinations … they’re absolutely wrong. There’s nothing to back that up. And you should start calling those people out, to be honest with you.”

Dunleavy’s letter reinforced that statement and said Reinbold has sent many “superfluous inquiries” to administration officials.

“Your baseless, deleterious, and self-serving demands on government resources amounts to an abuse of public services and will no longer be endured,” the letter states.

“I will not continue to subject the public resources of the state of Alaska to the mockery of a charade, disguised as public purpose,” it concludes.