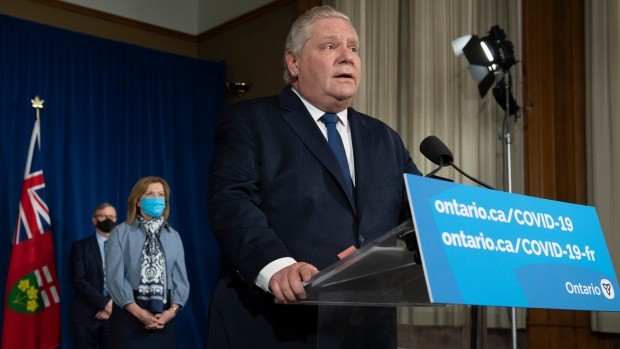 The province is expected to announce today whether restrictions will be eased in Toronto and Ontario’s three other COVID-19 hot spots or if strict lockdown measures will continue to curb the spread of the virus.

Many businesses, including restaurants, gyms, and hair salons, have reopened in most regions of the province over the past two weeks following declining COVID-19 case counts, deaths, and hospitalizations. But in Toronto, Peel Region, York Region, and the North Bay Perry Sound District Health Unit, stay-at-home orders remain in effect due to higher levels of community transmission and concerns over how more transmissible variants of the virus are circulating.

The province is expected to announce later today whether these regions will stay under strict lockdowns or if more restrictions will be eased starting next week.

The medical officers of health in both Peel and Toronto have both formally requested that the province keep their regions out of the colour-coded reopening framework for at least another two weeks. York Region’s medical officer of health has urged the premier to put his region in the red or “control” category of the framework, which allows in-person dining to resume at restaurants and bars, and gyms to reopen with reduced capacity.

Ford has indicated that he intends to listen to the local medical officers of health.

Speaking to CP24 on Friday morning, Mayor John Tory said he believes keeping Toronto locked down for a little bit longer is the right call and noted that he’d be “surprised” if the premier eased restrictions in the city next week.

“I’d be surprised only because I saw the premier saying he generally respects and tries to reflect the advice of the local medical officers of health in their decision-making,” Tory said.

Tory has repeatedly cautioned against reopening parts of the economy only to enter yet another lockdown.

“The worst scenario is we open up and we open up too quickly and then have to close again in three or four or five weeks just as the spring is coming and just as the patios and other kinds of businesses are able to open back up,” he said.

“So Dr. de Villa is being careful. I have asked a lot of questions and I support her being careful…. I suspect we will end up in some variation of the request that we’ve made but we have to see.”

It is not clear exactly when the province will announce its decision today but Premier Doug Ford will be holding a news conference to provide an update on Ontario’s vaccine distribution program at 2 p.m.

The news conference will be streamed live on CP24.com.

Don't Miss it 13,193 Fresh COVID-19 Cases In India, 2.4% Higher Than Yesterday
Up Next Latest news on coronavirus cases and vaccines