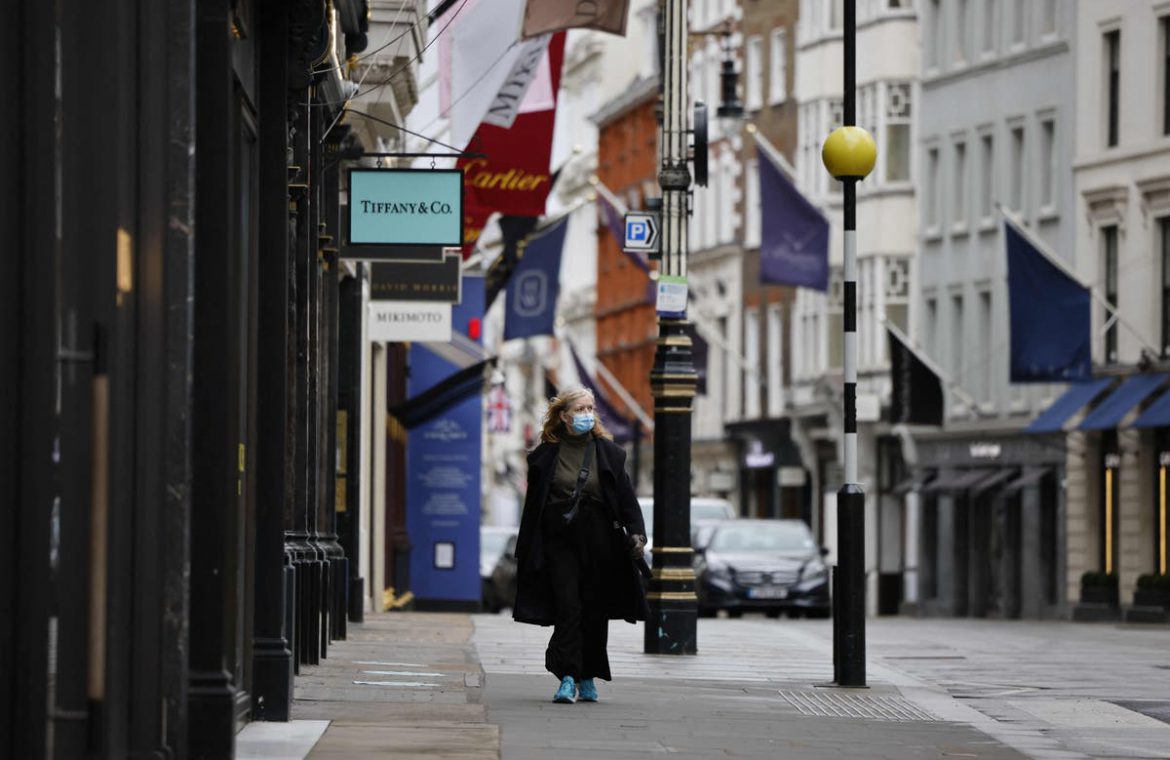 verything is “moving in the right direction” and Covid-19 vaccines are “doing the job” when it comes to cutting infections across the UK, a top scientific adviser has said.

Professor Adam Finn, from the University of Bristol and a member of the Joint Committee on Vaccination and Immunisation (JCVI), said it was becoming clearer that the Pfizer and AstraZeneca jabs are “definitely doing the job.”

Meanwhile, Professor Neil Ferguson said he was encouraged by the “cautious” approach being taken by ministers, telling told BBC Radio 4’s Today programme that: “And it still may well be that by the end of May, we’re in a very different country than we are today.”

It comes as a survey found Britons are cautious about easing lockdown restrictions, with only around one in 10 people saying they think the current restrictions should be lifted immediately.

Italian police are investigating the offer of Covid-19 vaccines by unnamed intermediaries to Veneto regional authorities, indicating a possible attempt to create a black market parallel to the national and EU level procurement process, two sources with knowledge of the matter said on Friday.

Veneto governor Luca Zaia and regional health director Luciano Flor said this week they were evaluating two offers they received for a total of 27 million doses of the Pfizer vaccine, without naming who had approached them.

Flor has said that the two offers were shortlisted from a total of around 20 proposals the Veneto region had received from various intermediaries in recent days, including some involving AstraZeneca’s vaccine and Russia’s Sputnik one.

The approaches are unusual because the drugmakers that manufacture the vaccines have struck deals with national governments and, in the case of the European Union, with the EU Commission, which has negotiated a procurement programme on behalf of its members.

Spain has given a full two-shot course of coronavirus vaccines to almost all its elderly nursing-home residents, the FED care-home association said on Friday, restoring some sense of security to the most vulnerable section of the population.
Separately, Prime Minister Pedro Sanchez said the country, which has administered 2.8 million doses and fully inoculated 1.14 million people, was on track to vaccinate 20 million people in the first half of 2021 out of a population of 47 million.

Nearly 43,000 care-home residents died of Covid-19 or suspected infection in the devastating March-May first wave of contagion, and prosecutors are investigating more than 200 cases of potential criminal negligence at such homes.

But more than 97% of residents have now been vaccinated across Spain’s 17 regions, according to the FED, putting nursing homes among the country’s safest places.

“They are very positive data that allow us to be optimistic about the future,” said FED’s president Ignacio Fernandez Cid. “Immunity will allow us to gradually return to the longed-for lost normality.”

Health Emergency Chief Fernando Simon said earlier this week that for the first time since the start of the pandemic, people over 65 who live in care homes have a lower rate of infection than those who live outside, supporting the thesis, if indirectly, that the vaccines are having an effect.

Homeschooling during this lockdown has had a greater negative impact on the wellbeing of parents and children than in spring last year, figures suggest.
Half of parents said homeschooling amid the latest wave of school closures had affected their wellbeing, the Office for National Statistics (ONS) found.

This is higher than the more than a quarter (28%) of parents who reported this in April last year – when schools were closed during the first lockdown.

Nearly two in three (63%) parents said homeschooling was now having a negative impact on their children’s wellbeing, compared to 43% in April.

The ONS analysed responses from parents across Britain between January 13 and February 7 as part of its Opinions and Lifestyle Survey.

The figures also show that 90% parents said a child in their household had been homeschooled in the past seven days because of the pandemic.

More than two in three (67%) of women with a school-aged child said they had personally homeschooled, compared to 52% of men, the data shows.

Oxfam said the pledges made by the G7 were “insufficient” to deal with the size of the vaccine supply issue facing the globe.

Max Lawson, head of inequality policy at the charity, said: “While some of those attending the G7 have made welcome steps to increase the supply of vaccines to poor countries, these remain insufficient when compared to the scale of the Covid-19 threat.

“Making huge parts of Africa and Asia wait for unwanted, leftover vaccines from rich countries’ stocks is not just immoral, it is irresponsible.

“The lack of co-ordinated action from the G7 is inexcusable. The longer huge swathes of the world’s population are denied protection, the greater the threat that virus mutations will threaten us all.

“Poor countries should not be forced to wait for vaccines to trickle down to them.

“Between them, G7 nations have secured enough vaccines for every one of their citizens to be vaccinated three times over, while many poor countries are yet to receive a single dose.”

G7 leaders agreed on the need to ensure coronavirus vaccines reach those that need them “wherever they are in the world”, Number 10 said after the virtual meeting.

A Downing Street spokeswoman said: “All leaders agreed on the opportunity 2021 presents for the G7 to take a united approach to shared challenges as we build back better from the coronavirus pandemic.

“They agreed on the need to ensure coronavirus vaccines, therapeutics and diagnostics reach those that need them, wherever they are in the world. The Prime Minister welcomed the contribution all G7 members have made to ACT-A and the Covax vaccine facility. He also set out the UK’s commitment to share the majority of any future surplus vaccines with Covax.

“The Prime Minister emphasised the need to learn lessons from this pandemic and highlighted the importance of agreeing common protocols to prevent future pandemics. He noted the value of a global health treaty in this context.

“G7 leaders welcomed the United States’ readmission to the Paris Climate Agreement and agreed on the need for a green, sustainable global recovery. The Prime Minister said that the G7 should work together to pave the way to the Kunming Convention on Biological Diversity and Cop26 Summit in Glasgow in November.

“All leaders agreed on the important and unique role the G7 plays as the world’s leading democracies. The Prime Minister welcomed the united stance taken by the G7 in condemning the recent coup in Myanmar and the detention of Alexey Navalny in Russia. He stressed the responsibility the G7 has to demonstrate to the world the benefit of our shared democratic values in creating open and prosperous societies.

“The Prime Minister looked forward to seeing his fellow leaders in person at the G7 summit in Cornwall in June.”

Nearly half of adults admitted to hospital with Covid-19 have experienced at least one health-related complication, with one in four having trouble coping at home after discharge, research suggests.

The findings, which involved more than 73,000 patients across 302 healthcare facilities in the UK between January 17 and August 4 2020, were presented to the Scientific Advisory Group for Emergencies (Sage) on February 4.

Complications were most common in males, those aged 30 and over, and in patients with underlying health conditions, the scientists said in the document published on Friday.

The overall mortality rate was 31.5% (23,092), and nearly half of the participants (49.7%) experienced at least one health complication, such as heart, kidney or respiratory problems.

The findings showed one in four of those with complications had difficulties coping at home after discharge.

The Government said a further 533 people had died within 28 days of testing positive for Covid-19 as of Friday, bringing the UK total to 119,920.

Separate figures published by the UK’s statistics agencies for deaths where Covid-19 has been mentioned on the death certificate, together with additional data on deaths that have occurred in recent days, show there have now been 139,000 deaths involving Covid-19 in the UK.

The Government also said that, as of 9am on Friday, there had been a further 12,027 lab-confirmed cases of coronavirus in the UK.

Tasked with tackling sky-high rates of vaccine hesitancy in Kazakhstan, an online chatbot has been enlisted to shatter myths and dispel doubts about the COVID-19 jab as the Central Asian nation kicks off its inoculation drive.
Only about 25% of Kazakhs say they would opt to be vaccinated against the coronavirus compared with 75% of Britons and 56% of Americans, according to data from the Johns Hopkins Center for Communication Programs.

Such findings spurred the International Federation of Red Cross and Red Crescent Societies (IFRC) to launch the new tech tool to counter widespread misinformation by providing a reliable source of facts and figures about COVID-19.

“Creating a chatbot is an opportunity to keep up with the times,” Yerkebek Argymbayev, president of the Red Crescent Society of Kazakhstan, said in a statement.

“With this bot people will be able to learn what they are interested in; from the myths associated with the coronavirus and vaccines, to the opportunity to enrol in first aid courses.”

An IFRC survey conducted in the country between November and December last year found social media were the second most popular and most trusted source of information after television.

The European Commission has pledged to double its contribution to the World Health Organisation’s Covax programme, bringing the 27-nation bloc’s commitment to the initiative to deliver vaccines to poor nations to a billion euros (£870 million).
Commission president Ursula von der Leyen praised a “true moment of global solidarity” in a statement as leaders of the G7 economic powers gathered in a virtual meeting.

She also announced an additional 100 million euros (£87 million) to support vaccination campaigns in Africa in partnership with the Africa Centres for Disease Control and Prevention.

“The funding will be used to strengthen health systems, ensure the cold chains, buy equipment and train staff,” Ms von der Leyen said, adding that the EU would discuss with drug makers how they can ramp up Covid-19 vaccine production capacity in Africa.

“We are also exploring potential support to boost local production under licensing arrangements,” she said.

A three-month gap between doses of the Oxford/AstraZeneca coronavirus vaccine results in higher vaccine efficacy than a six-week gap, a new study suggests.

The research indicates that with three months between the first and second dose there was an overall efficacy of 81%, compared to 55% for a six-week interval.

The first dose offered 76% protection in the three months between doses, according to the University of Oxford research published in The Lancet.