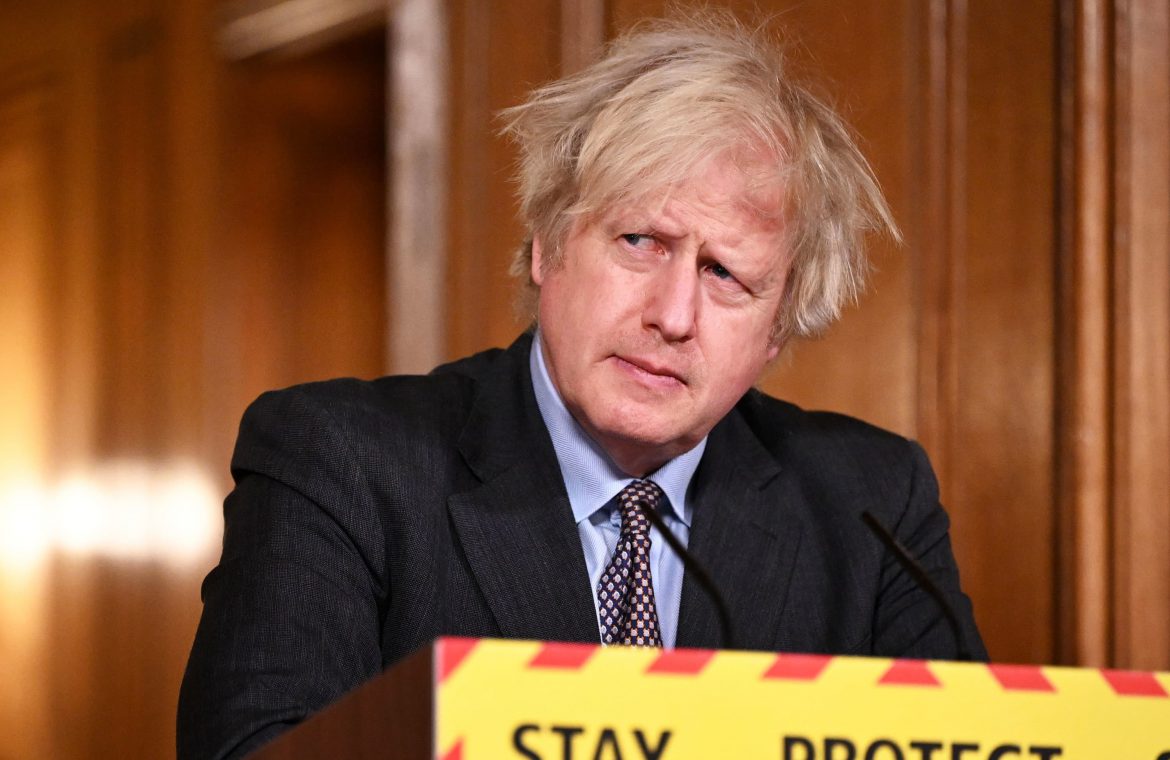 Lung specialist Dr. Vin Gupta told CNBC’s “The News with Shepard Smith” that patients should stop weighing the pros and cons of which Covid vaccine is better and get the first shot available into their arms as soon as possible.

“People are saying, maybe I want the Pfizer vaccine instead of Johnson & Johnson or a different one,” said Gupta, a professor at the University of Washington’s Institute for Health Metrics and Evaluation, during a Monday evening interview. “That’s the wrong way to think about it. Brand here doesn’t matter. Get the first vaccine available.”

The United States surpassed 500,000 deaths due to the coronavirus pandemic, and that’s double any other nation.

White House Covid advisor Andy Slavitt said Monday the vaccine shipments that were delayed last week by the historic winter storm will be delivered by the middle of the week, CNBC’s Will Feuer reported.

“I reported on Friday that we would catch up on deliveries by the end of this week,” Slavitt said at a White House press briefing. “We now anticipate that all backlogged doses will be delivered by midweek.”

In total, about 7 million vaccines are expected to be delivered this week, Slavitt said. That number includes shots originally scheduled to go out this week and some of the backlogged doses.

To be sure, Slavitt said it will take some time for vaccination sites to recover from the delays.

“We encourage vaccination sites to follow that same lead of those who are working extended hours to catch up on deliveries by scheduling more appointments to vaccinate the anxious public as quickly as possible,” he said.

The house Budget Committed voted to advance a $1.9 trillion coronavirus relief package on Monday as Democrats look to sign the bill into law later this week, CNBC’s Jacob Pramuk and Kevin Breuninger reported.

Some of the bill’s key provisions include a $400-per-week unemployment insurance supplement through late August, direct payments of $1,400 for individuals making up to $75,000 per year and $20 billion for a national vaccination program.

“Without additional resources, we will never get where we need to be,” said House Budget Committee Chairman John Yarmuth, D-Ky., at the start of the markup hearing Monday afternoon.

“We aren’t going to wait. We are going to pass this legislation and we are going to turn this pandemic and economic crisis around,” Yarmuth said.

Roughly one year into the coronavirus pandemic, the United States death toll has surpassed 500,000.

The U.S. has reported more deaths caused by Covid-19 than any other country, with the death toll standing at double that of Brazil, the nearest country. On a per capita basis, the U.S. trails only the U.K., Czech Republic, Italy and Portugal.

The pace of new deaths in the U.S. remains high, but appears to be topping out. The country passed 100,000 reported fatalities in May, and didn’t reach 200,000 confirmed deaths until September, according to data compiled by Johns Hopkins University. It took another 2½ months to reach 300,000 deaths caused by Covid-19, but just about one month each to reach 400,000 and then 500,000 virus-related deaths.

Nearly as many Americans have died of Covid-19 as were killed in World War I and II, combined. The U.S. Covid-19 death toll represents a population roughly the size of Atlanta, Georgia, or Kansas City, Missouri.

The staggering toll also puts the disease among the leading causes of death in the U.S. According to figures from the Centers for Disease Control and Prevention, only heart disease and cancer killed more than 500,000 people annually in 2019.

Projections from the Institute of Health Metrics and Evaluation at the University of Washington show the death toll continuing to increase, at a range of 571,000 to 616,000 total deaths in the U.S. by June 1, based on various scenarios.

For the first time in nearly a year, New York City movie theaters will be allowed to reopen beginning March 5 at 25% capacity or 50 people per screening, New York Gov. Andrew Cuomo said.

Seating will be assigned, masks will be required and staff will have to control occupancy and traffic flow to ensure compliance, Cuomo told reporters on a call. The Democratic governor added that movie theaters will need an updated filtration system to help purify the air.

New York City is a vitally important hub for movie ticket sales. There are nearly 300 cinemas in New York state, but the key geographic metric that analysts are focused on is New York’s designated market area, or DMA. That area, which includes parts of Connecticut and New Jersey, represents 7.4% of the total domestic box office, according to Comscore.

That is the second-highest driver of ticket sales in the U.S., just behind the Los Angeles DMA, which accounts for 8.9%.

U.K. Prime Minister Boris Johnson shared his optimism about exiting the lockdown in the country, pointing to its “unparalleled” vaccine program as a sign that it is on a “one-way road to freedom,” according to reporting from CNBC’s Katrina Bishop and Matt Clinch.

Lockdowns in the country will be be gradually eased, with plans to reopen schools on March 8, and nightclubs by June 21. The dates are data dependent and are subject to change.

The prime minister announced that more than 17.7 million Britons have their first dose of a coronavirus vaccine. The U.K. has the fourth-highest number of infections, after the U.S., India and Brazil.

“With every day that goes by, this program of vaccinations is creating a shield around the entire population, which means that we are now traveling on a one-way road to freedom and we can begin safely to restart our lives and do it with confidence,” Johnson said at a press conference.

The FDA said Monday Covid-19 vaccines that are modified to protect against new, emerging variants may be authorized without the need for lengthy clinical trials, ensuring optimized drugs could hit the market quickly once developed.

The companies behind the adjusted drugs would need to submit data that shows the modified vaccine produces a similar immune response to the original formula and is safe. Once that’s done, the FDA would clear the new vaccines as an amendment to a company’s originally approved emergency use application, the agency said in a 24-page document.

The new guidance from the FDA comes as U.S. health officials grow concerned the virus could mutate enough to evade the protection of vaccines already on the market and reverse the progress made in combatting the pandemic.

The FDA authorized Pfizer’s and Moderna’s vaccines for emergency use in December, and the two drugmakers have since announced plans to modify their shots to target new variants.

White House press secretary Jen Psaki said Monday that President Joe Biden will order all flags on federal property be lowered to half-staff for the next five days to mark the grim milestone of 500,000 American deaths to Covid-19.

Psaki said the president plans to deliver remarks later on Monday that reflect on the grief of a loss so overwhelming for both the country and the thousands of families who have lost a loved one. Biden will also encourage Americans to work together to prevent the further loss of life as vaccines are deployed.

“Later today, the president, the first lady, the vice president and the second gentleman will mark the solemn milestone of 500,000 American lives lost to Covid-19,” Psaki said.

“They will ask all Americans to join in a moment of silence during a candle-lighting ceremony at sundown,” she added. “President Biden will also deliver remarks and order all flags on federal property to be lowered at half-staff for the next five days.”

An instructional assistant helps a student with his computer as in-person learning resumes with restrictions in place to prevent the spread of coronavirus disease (COVID-19) at Wilson Primary School in Phoenix, Arizona, August 17, 2020.

A new study from the U.S. Centers for Disease Control and Prevention found that educators may play a “central role” in transmitting Covid-19 within schools where social distancing and face covering precautions aren’t followed.

The study, which looked at eight elementary schools in Georgia between Dec. 1 and Jan. 22, found nine Covid-19 “clusters” involving 13 educators and 32 students at six of the schools. All but one of the clusters involved “at least one educator and probable educator-to-student transmission,” the study found.

While vaccinating educators isn’t required for schools to return for in-person learning, researchers said it could be important for protecting the most at-risk populations while reducing interruptions to in-person learning.

Former FDA chief Gottlieb on when the U.S. will achieve herd immunity

Dr. Scott Gottlieb joined CNBC’s “Squawk Box” to give his reaction to one physician’s assessment that the U.S. can achieve herd immunity from coronavirus by the spring.

GlaxoSmithKline and Sanofi started a new clinical trial of their Covid-19 vaccine candidate and expect to reach the final testing stage in the second quarter, Reuters reported.

The drugmakers hope to see the vaccine approved by the fourth quarter after having initially targeting the first half of this year, Reuters reports.

The drugmakers said in December they would launch a new study after clinical trials showed an insufficient immune response in older adults.

The vaccine candidate uses the same recombinant protein-based technology as one of Sanofi’s seasonal influenza vaccines. It will be coupled with an adjuvant, which acts as a booster to the shot, made by GSK, according to the Reuters report.

The study will test two injections given 21 days apart.

UK set to announce how it will exit lockdown

U.K. Prime Minister Boris Johnson is set to announce how and when England will start to lift lockdown restrictions, reports CNBC’s Holly Ellyatt

Government ministers are expected to discuss the details Monday morning and the prime minister will then outline the proposals to parliament later this afternoon.

Johnson is also expected to confirm that schools in England will reopen on March 8.

The lifting of the country’s third lockdown, in place since early January, “will seek to balance health, economic and social factors with the very latest epidemiological data and advice,” the government said in a statement.

For two weeks beginning on Feb. 24, the Small Business Administration will only accept applications for forgivable Paycheck Protection Program (PPP) loans from companies with fewer than 20 employees, a government official told Reuters.

The SBA plans to revise the PPP rules to match the approach it used to get small farmers and ranchers access to financial aid. The program also plans to set aside $1 billion for business owners with no employees in low- and moderate-income areas, which are majority owned by women and people of color, according to Reuters.

Don't Miss it B.C. records 1,428 new cases of COVID-19 and 8 deaths over the weekend
Up Next Big fall in Covid cases in England but infections still high among under-25s – BBC News