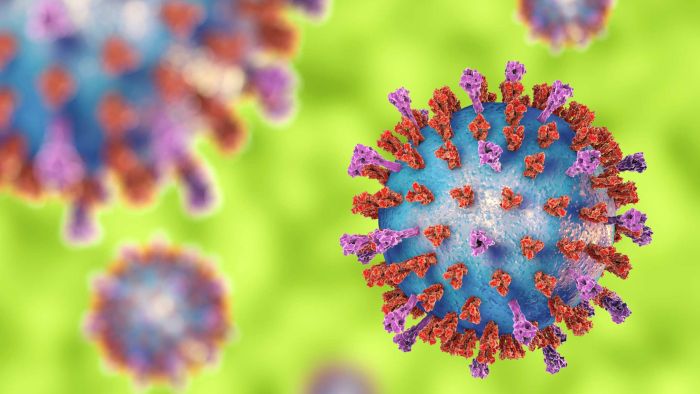 The spread of a highly contagious virus with similar symptoms to COVID-19 has prompted warnings that 2021 could be a year of illness and disease as social distancing rules start to relax.

Key points:Case numbers of RSV are three times higher than they were last yearMost children recover easily, but some require treatment in intensive careHealth authorities are also urging Australians to get the flu jab when it’s made available

South-east Queensland is already facing a surge of the Respiratory Syncytial Virus, which primarily affects children between 18 months and two years.

Roger Faint, the head of the Sunshine Coast Local Medical Association, said paediatric wards on Queensland’s Sunshine Coast had been relatively quiet up until now.

He said the increase in presentations was probably driven by children returning to school.

“The hospital wards have not been busy in paediatric wards up until the last month or so,” Dr Faint said.

“As time has moved on, people got more relaxed — I suspect that’s a large part of what’s happening.”

There were three during the same period last year and zero the year before.

LIVE UPDATES: Read our blog for the latest news on the COVID-19 pandemic.What is RSV?

RSV infects the lungs, bringing a cough and cold.

Most children recover easily, but some suffer from a pneumonia-type infection that can put a small number in hospital.

Download the ABC News app for all the latest.

Some of those will need to be treated in an intensive care ward and ventilated, because their breathing is affected.

He said the rise of RSV cases was also impacting the Queensland Children’s Hospital and others across the south-east.

Dr Faint said as Queenslanders begin to socialise and mix with confidence, and social distancing requirements continue to ease, there was a risk that 2021 could be a dangerous year for infections, including the flu.

“As those issues break down and we go back to our pre-COVID behaviours, then you’re going to start seeing a spike of infections,” he said.

Only 6,034 people were diagnosed with the flu in Queensland last year — a 90 per cent reduction on the year before, when 66,135 were diagnosed.

At least 37 people died from influenza in Australia in 2020, down from 921 the year before.

But Dr Faint said Australians now seemed less willing to go to work when they were sick.

“Probably only 18 months ago, you were expected to tough it out and go to work if you’ve got a cough and a fever,” he said.

“It may be that way from now on — we expect people to stay home and work from home if they’ve got a cough and a cold, just to protect our kids or protect each other.”

Queensland Health is urging people to get inoculated once the flu vaccine becomes available.

“It’s vital Queenslanders book in for their flu jab this year,” a spokeswoman said.

She said the best time to be vaccinated was between mid-April to the end of May, ahead of winter.

Don't Miss it Two new strains of Covid-19 in 3 states, but not linked to surge, says Centre
Up Next Pfizer, Moderna, J&J pledge 240 million total Covid-19 vaccine doses by the end of March