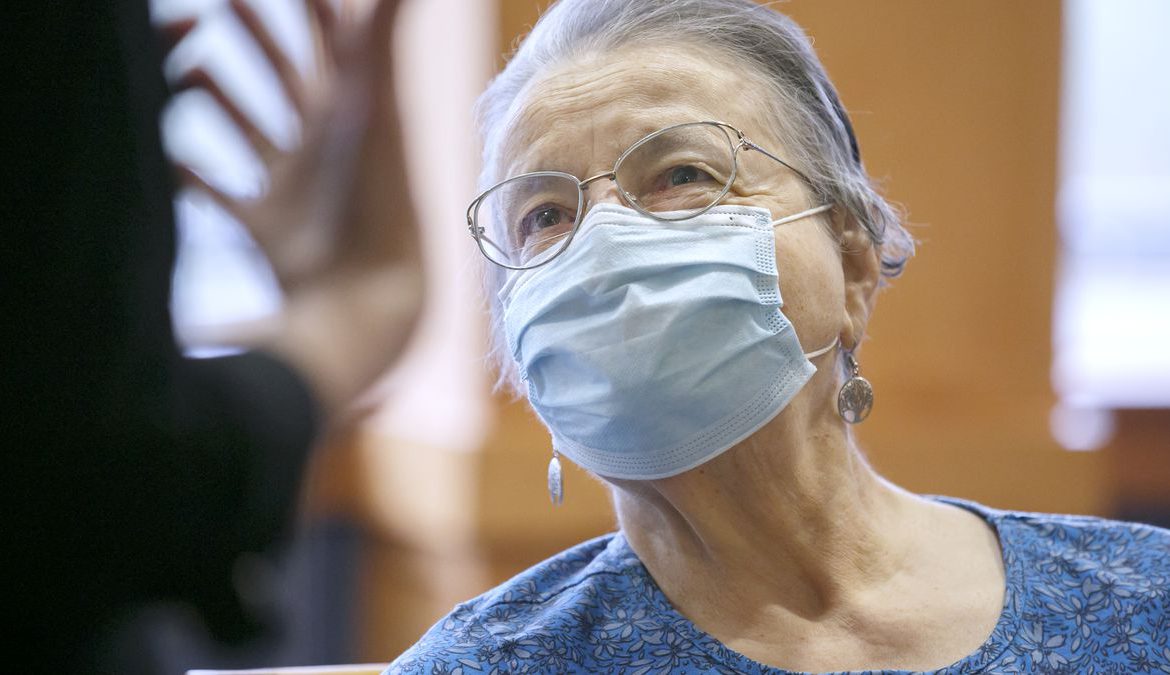 Alice Maurer, 79, waits 15 minutes after receiving her COVID-19 vaccination at Friendsview Retirement Community in Newberg, Ore., Feb. 5, 2021. Maurer’s husband is in the memory care unit at Friendsville and on hospice, and she hopes that since she has been vaccinated, she will be able to visit him soon.

Your browser does not support the audio element.

They’ve been married 56 years. Nick Mauer has advanced Alzheimer’s and is partially blind, so communicating with him is a challenge.

“I think he sees enough he’ll be able to see the movement of bright colors,” Alice said. “It’ll be something to catch his attention.”

But she couldn’t give him the balloons herself. She couldn’t even see him. Instead, she handed them to staff at the Friendsview retirement community, where the couple lives, Alice in an apartment for independent residents on the 5th floor, Nick in hospice care on a closed memory care unit in the same building.

Though they live just floors apart, Alice has been only rarely able to see or touch her husband in the past year because of COVID-19 and long term care visitation restrictions, in what may be the final year of his life.

“I just want to be able to hug him and kiss him,” she said.

Separation from family and friends is one of the hardest things about the pandemic. For bed-bound nursing home and long term care residents, it’s a particularly harsh consequence of the rules meant to keep COVID-19 out of the facilities where it has done the most harm.

For couples with a spouse living in long-term care, that separation can be particularly challenging.

They met when Alice was a college student at George Fox University, just across the street from the retirement community where they now live. Nick had thick hair back then, she says, and Coke-bottle glasses.

“And a beautiful deep bass voice,” she added with a laugh.

“I’m so thankful,” says Alice Maurer, 79, after she receives a COVID-19 vaccination from McMinnville paramedic Elle Miller, earlier this month. Maurer lives in an apartment for independent residents on the 5th floor at Friendsview, while her husband Nick lives in hospice care on a closed memory care unit in the same building.

The Mauers moved around a lot together, working as missionaries in the Peruvian Andes, singing hymns in Spanish and the indigenous Amyra language. They moved to Idaho, then back to Oregon. They had three kids.

Alice says they were both strong-willed people. It was a loving marriage, and a challenging one.

“We made a commitment when we were first married that this was for life,” she said. “This is what God’s plan is for life, and that no matter what, we were sticking it out.”

“He knows I’m somebody special”

When the pandemic first started, Alice says she was completely unable to see Nick. Then, for a while, visitation restrictions at Friendsview were relaxed for people with spouses on hospice. She wore a mask and was able to sit at his bedside.

“He doesn’t know who I am anymore, but I know who he is,” she said. “And he knows I’m somebody special, I think. He responds in a way that there’s got to be some connection.”

She would play Nick recordings of their children on her cell phone and sing to him.

“Sometimes when I get to singing the old hymns and songs, it would perk in his mind and he would sing along,” she said.

But as cases in the community surged this past fall, those visits ended. Indoor visitation at long term care facilities is not allowed in counties the state rates at Extreme Risk for COVID-19 spread, or in facilities that had a resident or staff member test positive for COVID-19 in the past 14 days.

Friendsview has reported a handful of positive cases and exposures, though never a full-blown outbreak.

.Alice was able to visit Nick for about three days around Christmas, but otherwise, she hasn’t been able to sit with him for the past five months. She says he is getting loving care at Friendsview, and she understands the need for restrictions on in-person visits.

Michelle Townley, RN, left, talks with Alice Maurer, 79, while Maurer waits 15 minutes after receiving her COVID-19 vaccination. Alice Maurer is hoping to be able to visit her husband Nick after she’s fully vaccinated.

“It doesn’t mean you like them, but we’ve been thankful that they’re working so hard to keep us safe,” she said.

And a reunion may happen soon. In mid-February, Nick received his second dose of the COVID-19 vaccine. Alice got her first a few days before at a clinic held for Friendsview residents. It was amazing, she said, to be surrounded by friends and neighbors.

Alice is hoping to be able to visit Nick after she’s fully vaccinated.

The state and CDC have yet to announce new guidance around visitation policies in long-term care facilities where residents have been vaccinated.

Yamhill County, where Alice and Nick live, is still considered at “extreme risk” for COVID-19, according to the state’s system. But the number of cases there is falling, and that could change soon, making it possible for Alice to see Nick again consistently.

She’s thought about the hymn she wants to sing to him: “Leaning on the Everlasting Arm.” She’s going to sing it in the Amayra language, like they used to when they were young missionaries living in Peru. That’s the way Nick remembers it best, and sometimes, he can sing it along with her.

“I just can’t help but feel that if I can give him a big hug and kiss, and hold his hand and sing … I just can’t wait,” she said.

Don't Miss it Coronavirus Live Updates: Newly Reported U.S. Cases Continue to Edge Up
Up Next Covid-19 vaccine registration India: Who are eligible and how they can register | India News