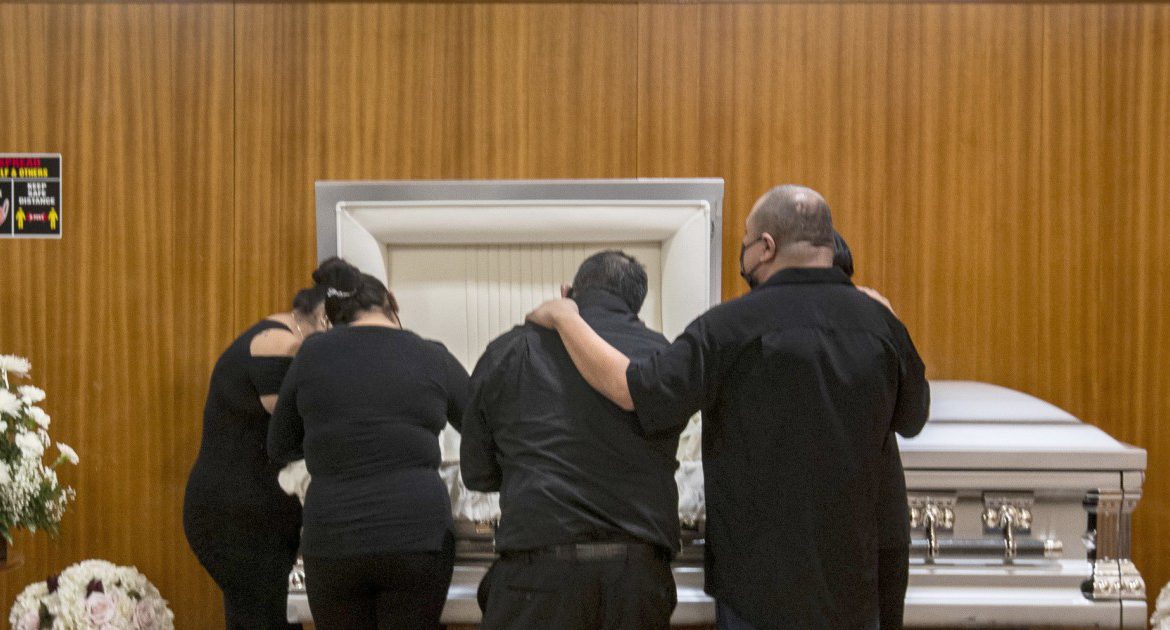 California has surpassed 50,000 COVID-19 deaths, a tally that came as Los Angeles County reported a backlog of more than 800 deaths over the autumn-and-winter surge.

The count comes as daily coronavirus cases and COVID-19 deaths have dropped considerably in recent weeks, although some scientists remain concerned about the potential spread of mutant variants that are more contagious and possibly more lethal. While California has the largest number of COVID-19 deaths of any state in the nation, it ranks 32nd among the 50 states and the District of Columbia for COVID-19 deaths per capita.

“This was a period, as you all know, where very many deaths occurred across the county. And not all of them were reported to [the Department of] Public Health because of the volume of records.”

The county typically identifies COVID-19 deaths by daily reports from healthcare providers. But the county also does an audit of causes of death listed on death certificates, where the additional 806 were found.

“The 806 deaths being reported today reflect those COVID-associated deaths that occurred during the surge that were not reported to [the Department of] Public Health through the death report form, but they were identified subsequently through our death certificate review, and we always do these reviews,” Ferrer said.

The 806 additional deaths account for about 8% of the new total of COVID-19 deaths in L.A. County in December and January, she added.

“It is heartbreaking to report on this large number of additional deaths associated with COVID-19. And it’s a devastating reminder of the terrible toll the winter surge has taken on so many families across the county,” Ferrer said.

News of the bleak record came as officials were investigating a cluster of four coronavirus cases at USC, two of which are confirmed to be the more contagious and potentially more deadly variant first identified in Britain, B.1.1.7.

“All of these cases were detected as part of USC’s routine testing and surveillance program,” she said Wednesday. “The individuals are doing well, and they’re in isolation. Close contacts have been identified, notified and they are in quarantine.”

Scientific research suggests that the currently available COVID-19 vaccines are effective against the U.K. variant.

“But with vaccine supply still very limited, the local transmission of the potentially more infectious U.K. variant underscores the need for every one of our residents to continue to use every tool we have to prevent transmission,” Ferrer said, “including not gathering with people you don’t live with, and distancing and masking whenever you’re out of your home and around others.”

There are now 18 confirmed cases of the U.K. variant in L.A. County; more than 200 in California and more than 1,800 nationwide, with 45 states reporting cases.

New research strongly suggests that the coronavirus strain now dominant in California not only spreads more readily than its predecessors, but also has the ability to evade antibodies generated by COVID-19 vaccines or prior infection. It’s also associated with more severe illness and death.

Those attributes have some scientists worried that the homegrown variant could reverse California’s recent progress in reducing new infections — especially if it’s able to swap mutations with other threatening strains. Experts said it underscores the need to vaccinate people as quickly as possible and to continue wearing masks, maintain social distance and follow other public health precautions as the state begins to reopen more.

By the end of next month, the homegrown B.1.427/B.1.429 strain will probably account for 90% of the state’s coronavirus infections, said Dr. Charles Chiu, an infectious-disease researcher and physician at UC San Francisco.

Ferrer said 40% to 50% of the coronavirus samples sequenced in the L.A. County public health lab since December contain the L452R mutation.

Despite the words of caution regarding the variants, officials continued to offer an optimistic message amid news that a third vaccine, manufactured by Johnson & Johnson, could receive emergency use authorization by the U.S. Food and Drug Administration within days.

And additional vaccines have arrived in L.A. County this week following weather-related delays in distribution.

“While we still don’t have clarity on the supply chain, in the next week or two, simple math indicates we should only see more and more supply in the weeks ahead. So get ready,” L.A. Mayor Eric Garcetti said Wednesday. “Hope is literally on the horizon.”

On March 1, educational and childcare workers, food and agricultural workers, law enforcement and other emergency responders not already eligible for the vaccine can begin getting shots in L.A. County. Eligible people can sign up for appointments starting next week.

Don't Miss it Should you get the vaccine if you’ve already had COVID-19? Q&A with Toronto’s top doctor
Up Next Doctors Without Borders demand an affordable access to Covid-19 vaccines for everyone | DW News