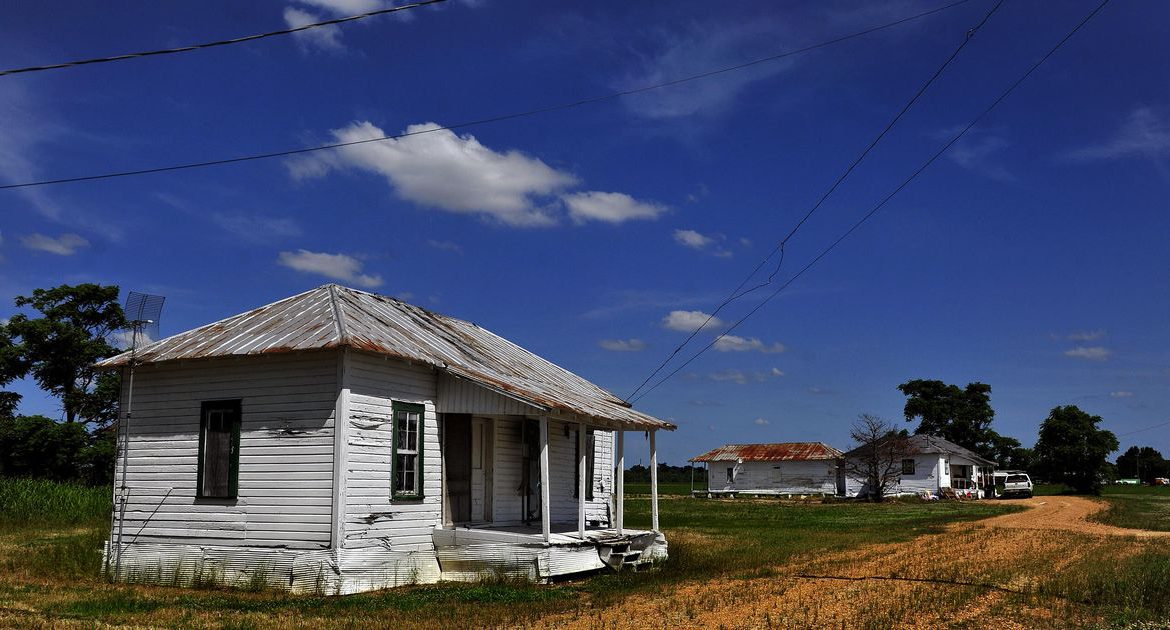 Parts of Sunflower County, Mississippi are served by Delta Electric Power Association. The electric co-op is working to get gigabit speed broadband to as much if its territory as possible.

This story is part of Crossing the Broadband Divide, CNET’s coverage of how the country is working toward making broadband access universal.

When Lt. Gov. Delbert Hosemann and lawmakers in the Mississippi legislature got $1.2 billion in federal money from the first stimulus bill in March, they decided to do something different. They used a portion of the funds to supercharge the rollout of high-speed broadband to the most underserved areas of the state in an effort to close the digital divide.

They went to rural electric co-ops — private, independent electric utilities owned by the members they serve — many of which were left gobsmacked by the offer, according to David O’Bryan, general manager of Delta Electric Power Association, which now serves Carroll and Grenada counties with broadband. Many of these co-ops had been preparing to deploy networks but lacked the cash to begin a major project, especially in the most remote and sparsely populated parts of their territories.

Subscribe to CNET Now for the day’s most interesting reviews, news stories and videos.

The result has been an acceleration in broadband deployment that could make Mississippi one of the most connected states in the nation within the next five to six years. That’s a huge leap for the state, which last year ranked 42 out of 50 in BroadbandNow’s 2020 connectivity rankings. The Federal Communications Commission says that at least 35% of rural Mississippians lack access to broadband.

While the dilemma of the broadband gap is complicated by faulty data, the progress shown in Mississippi illustrates how the right combination of money and public policy can bridge the digital divide, an encouraging sign as President Joe Biden prepares to unveil details of his $2 trillion infrastructure plan, which is expected to include $20 billion for building broadband networks. Mississippi is one of half a dozen states that used federal funding from the CARES Act in this way, serving as a possible template for how to solve this problem across the country.

“In recent months, I’ve told anyone who is willing to listen about the broadband miracle in Mississippi,” said Jonathan Chambers, CEO of Conexon, a Washington-based consulting firm, which works with electric co-ops looking to deliver rural broadband service. “The speed of deployment, the quality of the networks, the adoption by customers have all been nothing short of miraculous.”

Even before the pandemic hit, Mississippi lawmakers had already begun to set their public policy to encourage newcomers in the broadband market. In January 2019, then-Gov. Phil Bryant had signed the Mississippi Broadband Enabling Act, which removed a 1942 regulation that prevented electric cooperatives from offering anything other than electricity to their members.

While a majority of the state’s 25 electric co-ops had already done feasibility studies and were preparing for their broadband rollout, the urgency level spiked once the coronavirus pandemic hit. It shuttered schools and forced students to learn remotely via the internet. It closed businesses, leaving those who had jobs that didn’t require in-person contact to work remotely. It forced health care providers to accelerate the delivery of telehealth services to minimize exposure to the deadly virus.

So when the federal government sent states their portion of the $2 trillion CARES Act relief funds, Mississippi lawmakers decided to set some aside for rural broadband deployment.

Why millions of Americans still lack broadband at a time…

Michael Callahan, the executive vice president and CEO of Electric Co-ops of Mississippi, which represents the state’s 25 electric co-ops, said he got a call from the lieutenant governor asking if federal grants would help co-ops in the state get started. Callahan jumped at the chance.

“I said yes right away,” Callahan said. “I knew that this money could be just the thing to tip the scales for many of my guys who were on the fence.”

But Callahan added that he also knew the policy had to encourage long-term investment in broadband. “I told him [Hosemann], if you’re going to spend this money on broadband, you ought make sure you’re giving it to people who care about the state and who are committed to serving the people who need this service the most.”

The result was the Mississippi Electric Cooperatives Broadband COVID-19 Act, a bill that passed the Mississippi legislature in July and allocated $75 million of the state’s federal CARES Act money to providers building new networks in the hardest-to-reach areas of the state, where no service or inadequately slow service existed. The grant required providers to match funds dollar for dollar, guaranteeing a total investment of $150 million in new infrastructure in the state.

But there was a big catch.

The race to deploy

In total, 15 electric co-ops ended up receiving $65 million in grants from the CARES Act. But in a Brewster’s Millions-like twist, these co-ops had to agree to spend it by the end of the year. This was a tall order considering it gave these companies only six months to deploy their networks.

And so began a mad dash in Mississippi to deploy high-speed broadband.

“It was unprecedented,” said Ron Barnes, president and CEO of Coast Electric Power Association, which serves the coastal area of Biloxi and Gulfport. His company began serving its first customers in early November with 100 Mbps and 1-gigabit service after less than five months of work.

Despite the conditions, co-ops across the state jumped at the chance. It was exactly what Delta Electric needed to kick off its fiber deployment, O’Bryan said.

Headquartered in Greenwood, Delta Electric was involved in the early days of the movement to change the law so that electric co-ops could provide broadband service. But the not-for-profit, which serves the most rural and sparsely populated region of the state, just couldn’t get the numbers to add up to start their deployment.

“Our plan was to be opportunistic,” O’Bryan said. “We knew our members badly needed broadband, but we had done the feasibility studies, and we just didn’t have a way to pay for it.”

The company got $4.9 million of the state’s CARES Act funding, meaning it had poured nearly $10 million into its initial broadband deployment. It was enough to get the project started, O’Bryan said. Delta Electric hooked up its first fiber broadband customers just before Thanksgiving, delivering a 100 Mbps and 1 Gbps service to customers in an area of the state that had previously only had access to either satellite broadband or at best 3 Mbps DSL service.

“It was literally like turning on the lights for these folks,” O’Bryan said.

Barnes said that before the CARES Act money was allocated, the company’s plan was to deploy fiber in its more densely populated suburban markets, where the company knew it could sign up more customers. This is a similar strategy to what for-profit broadband providers, like Google and Verizon, had done in other parts of the country.

He noted that even though his co-op is not profit-driven like shareholder-owned companies, it still needed to show co-op members, who are also customers, that it could at least break even on the broadband business and not lose money. Still, Barnes said, the co-op intended to eventually build its broadband network to unserved areas.

The federal grant dramatically changed its strategy and timeline.

“It easily accelerated our build to that area by at least two years, if not more,” Barnes said.

Building broadband networks in rural America is incredibly expensive, and in some places, it’s nearly impossible. The terrain can be a problem, but the bigger hurdle is a lack of potential customers. In areas with low population density, broadband providers simply won’t offer service if they can’t get enough customers to pay for it.

It’s a problem that has dogged policy makers for decades. And in spite of the federal government spending billions of dollars each year to get infrastructure throughout the country, the lack of connectivity in rural America still persists.

The challenge is similar to the one the country faced in the early 20th century, when millions of Americans lacked electricity because commercial utilities found it too expensive to build out the infrastructure.

It was the establishment of the federal Rural Electrification Administration in 1935 under President Franklin Roosevelt and funding from the New Deal that led to the creation of hundreds of small electric cooperatives throughout the US to bring power to rural America. These co-ops relied on federal funds, and eight decades later 900 such cooperatives still exist, providing rural areas with electricity.

Unlike municipal or city-owned networks, these co-ops are owned by their customers or members. They run like a regular business, with profits often reinvested in the business or paid out in dividends to members.

Now co-ops all over the US are stepping up again to provide broadband. Barnes said that it’s simply in the DNA of these electric co-ops to help solve this problem.

“Electric co-ops have a can-do attitude,” he said. “We know how to cut through red tape.” He said being owned by their customers forces co-ops to have a more service-oriented perspective.

“We know if we don’t do a good job, they’ll turn over our board and get someone else,” he said. “It’s a model that has worked for 80 years.”

More federal funds on the way

The CARES Act may have been the catalyst to accelerate broadband deployment in Mississippi, but electric co-ops in the state say they will need additional funding to expand their networks and continue adding customers.

This is why co-ops have already taken advantage of the FCC’s Rural Digital Opportunity Fund, a $20 billion program set up by the agency to dole out money over the next 10 years to help fund the construction of high-speed broadband networks in unserved areas. Phase 1 of the auction to allocate funds ended in November, with bidders winning $495 million across eligible locations within Mississippi.

This was the second largest pot of money allocated to a state, behind winners in California. Elon Musk’s SpaceX, which is launching low-orbit satellites to beam broadband to homes and businesses, was also among the recipients. But so were several electric co-ops, including Coastal Electric and Delta Electric.

More federal dollars could be coming Mississippi’s way through new infrastructure legislation promised by the Biden administration. While details are scant and the legislation has yet to be introduced in Congress, Biden promised during the campaign that rural broadband would get a $20 billion investment in a variety of programs to bring wired and wireless internet access to areas where service doesn’t yet exist.

Barnes said the deployment of the CARES Act money, coupled with the policy changes by the legislature, proves that electric co-ops are up to the challenge and will get the job done if given the chance.

“In five months, we did what the incumbent telecom providers hadn’t done in their entire existence for these underserved communities,” he said. “The faster lawmakers can get us the money, the faster we can build the networks and get the economy going.”