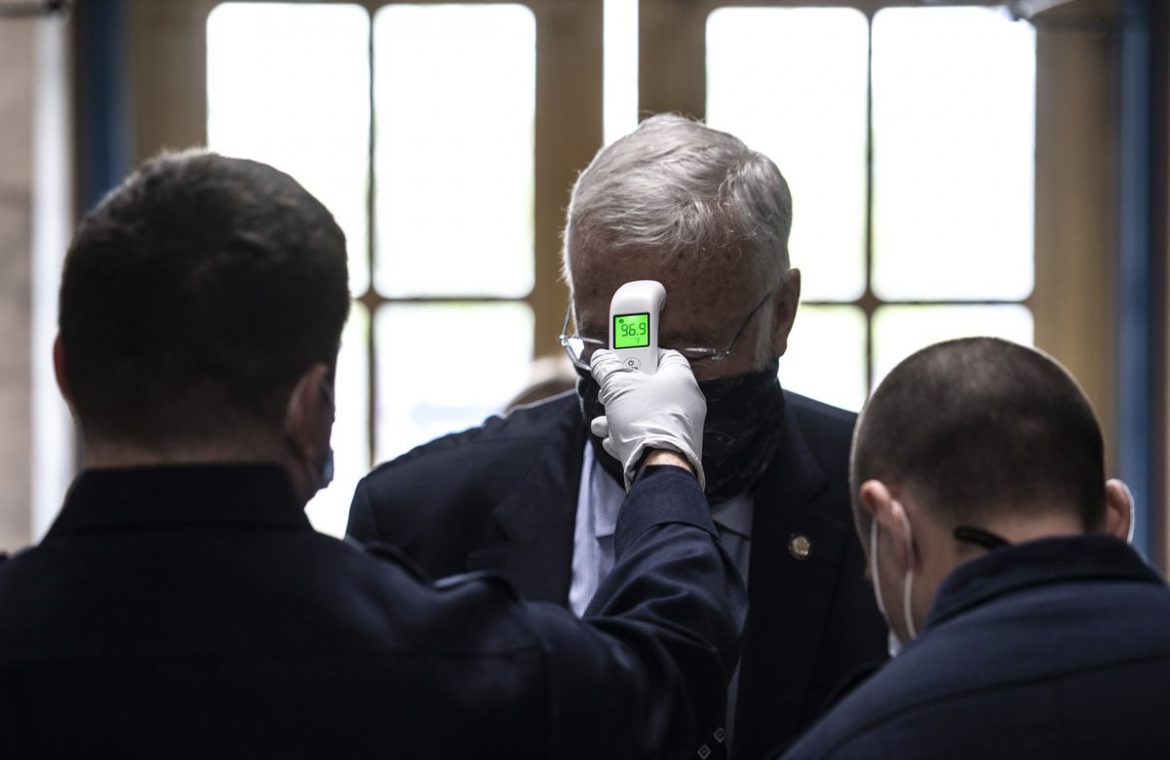 JUNEAU — Five people have tested positive for COVID-19 within the Alaska Capitol since Wednesday and 20 have been quarantined, but Alaska lawmakers on Monday said they intend for the Legislature to continue its work on schedule.

Two additional positive cases have also been reported, one identified Monday morning and another over the weekend, according to Jessica Geary, executive director of the Legislative Affairs Agency, the nonpartisan organization that operates the Capitol complex on behalf of the Legislature.

Thirteen of Alaska’s 60 state lawmakers were absent or excused from House and Senate floor sessions at the Capitol on Monday, although some of Monday’s absences were due to travel rather than quarantine. Legislators typically return from Juneau to their home districts during weekends for personal business and to meet with constituents.

The state House canceled two days of meetings last week because of the first positive test, but Speaker of the House Louise Stutes, R-Kodiak, said she does not expect Monday’s absences to affect the Legislature’s work.

Senate President Peter Micciche, R-Soldotna, said in a written statement that the Senate does not plan to change its schedule, but Micciche is encouraging the House to approve a resolution that would allow legislators to vote remotely. (The Senate has already approved the resolution.)

Nineteen people have been quarantined due to the positive tests involving Cronk’s office, said Geary.

More quarantines are possible once contact tracing is complete on the case reported on Monday morning, which involved an aide for Rep. Sara Rasmussen, R-Anchorage. The aide was showing no symptoms on Monday.

Rasmussen’s other aide has already quarantined as a precaution. Rasmussen herself was told by the Capitol’s testing contractor that she wasn’t in close contact with the staffer who tested positive.

The aide sat through a morning meeting of the House Finance Committee before their positive test.

Sen. Josh Revak, R-Anchorage, was among those absent from the Capitol on Monday. While in Juneau, he rents a room in a shared house. One of the other renters is an aide who tested positive, he said.

“If you could get other folks sick, you want to take that very seriously. Nobody wants to be responsible for getting somebody else sick and spreading any virus,” he said.

Last week, Stutes asked members of the state House to limit their travel.

“This last weekend, people did travel. But it was, I think, it was a situation where the plans had already been put in place. So I’m hoping, going forward, that people do not travel; we’ve got too much work to do,” she said.

She said she does not plan to clamp down on outside activity among aides.

“Show a little courtesy. That’s all I would say,” Stutes said.