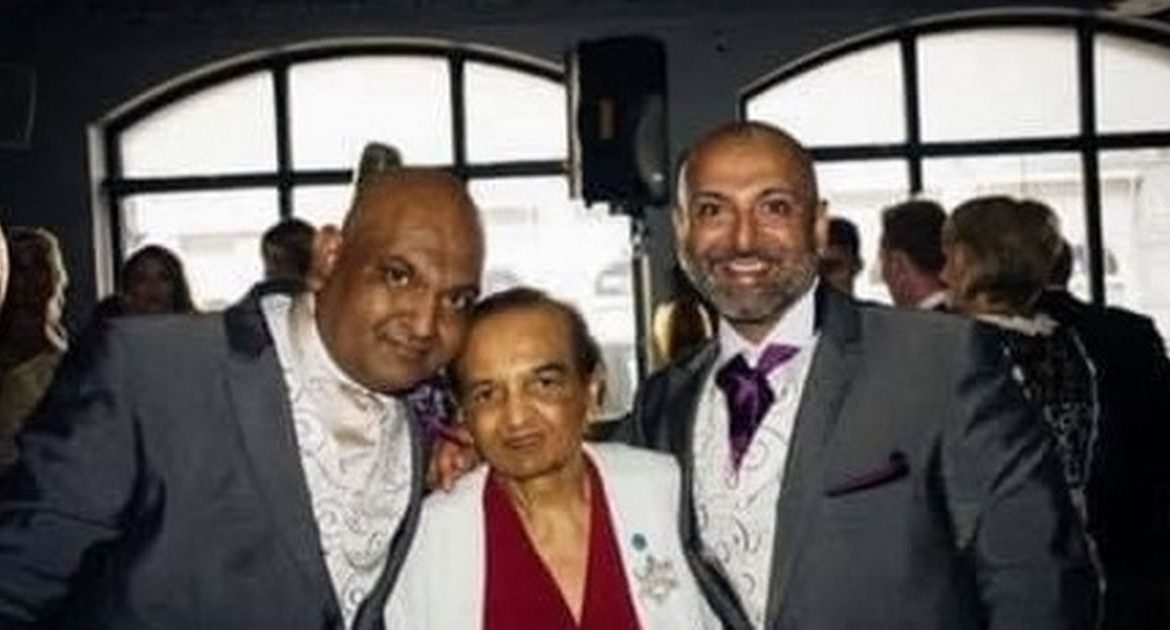 A family has been left “completely devastated” after two young brothers died within a month of each other while their mum battles coronavirus in hospital.

Ramzan Makani, aged 44, from Cardiff, died of organ failure at The University Hospital of Wales on February 25, less than a month after his brother Raheem Makani died. Popular DJ Raheem Makani, 45, also died at UHW on Feburary 9 after suffering a sudden heart attack. Raheem spent 10 days in intensive care prior to his death.

Devastatingly, their mother, Khatun Makani, 77, is mourning the deaths of her only children from a bed in the same hospital as she now battles coronavirus.

Ramzan’s wife, Rachel Makani, 44, said the death of the two brothers had completely devastated the family. Mum of two Rachel had been hospitalised with coronavirus herself. Tragically her husband died in the same bed she had been treated in just days earlier.

“I’m absolutely heartbroken, two brothers gone just like that, within a month – our family is broken,” said Rachel.

“We are all numb. I am recovering from coronavirus myself, I spent two weeks in hospital fighting for my life. Their mother is in hospital with covid now, fighting. It’s heartbreaking.”

Rachel was discharged from hospital on February 19 and when she got home to Ramzan she said she couldn’t believe how unwell he was. Ramzan, who suffered with underlying health issues, had previously been diagnosed with coronavirus. However, Rachel said he refused hospitalisation.

“When I came out of the hospital, I looked at him, and he had lost around 3 stone in weight. His skin was bright yellow. He had liver failure and a week later died of organ failure,” said Rachel.

“He had Covid and underlying health issues but wouldn’t come into hospital, he kept refusing the ambulance. When I got home on Friday he was so much worse than when I went in, I made him go in. I’ve lost the use of my legs a bit because of Covid. How I carried him down those stairs at home I will never know. But I carried him down, he didn’t know who he was, didn’t know his date of birth.

“We were sitting on the floor and he said, ‘Rach I can’t do this anymore, when the ambulance comes I won’t be able to walk in’. I said ‘Rams, they’ve got stretchers and wheelchairs’ – he was so delirious he wasn’t thinking straight.”

Find out about coronavirus cases in your area:

“I spoke to her yesterday and she isn’t really with it at the moment. I think she’s losing the will, she’s giving up. She’s lost both of her sons, both her children. She is absolutely beside herself, she feels as though she has lost her world, she’s lost everything.

“I’m trying to keep her going, saying she still has me and the kids. Both brothers couldn’t have kids so she treats mine like her grandchildren.”

Rachel has two children from a previous relationship but said Ramzan was like a dad to Junaib, 25, and Olivia, 22.

“He lived for me, the kids and our dog Maisy. We got her when she was six weeks old. Rams couldn’t have kids so we got the dog together. He treated my kids as his own, my daughter was only 12 and my son 16 at the time when we met.”

Rachel and Ramzan had been together for ten years and married for four. Rachel’s son Junaib cared for Ramzan while Rachel was in the hospital.

“My son was saying ‘Rams you need an ambulance’, but he wouldn’t go. My 25-year-old son was nursing him for two weeks and watching him deteriorate. My son is heartbroken. I feel like I failed and I got him in too late. He was reaching over and hugging me and he couldn’t open his eyes. He was pulling me in to him and they just spoke a million words. He was telling the children to look after me. His last text to my daughter was ‘I’ll be fine, look after your mum’. He was so loyal to me.”

Sign up to the CardiffOnline newsletter to receive our top stories straight to your inbox.

Rachel said the family had hoped that Ramzan would be well enough to return home from hospital, however, devastatingly, he died the following day.

Paying tribute to Ramzan, Rachel said: “He had a huge heart, he’d give anyone anything, he was just the most kind-hearted person that I’ve ever met. He was our life. We lived in our own world where it was just us, the kids and the dog. He would never see anyone struggle, he would be the first to give you his last £5 in his pocket.”

Rachel said that while Ramzan and Raheem had not always been close, the brothers looked out for each other in later years.

“They had their ups and downs like most brothers. I’m not going to say they were really close but it was brotherly love you know. By the end they were lending each other money, Rams bought Raheem his decks, they were talking properly. I wouldn’t say that over the years they were best of friends but they were brothers at the end of the day.”

Paying tribute to Raheem at the time of his death last month, his close friend Matt Zain described him as “full of life”.

Raheem Makani was a popular figure in Cardiff having worked as a DJ in different clubs and bars across the city for over two decades. Alongside this, Raheem was most recently known for his role as a DJ and Radio presenter on Radio Cardiff and formerly Kiss FM.

“He didn’t have a bad bone in his body”, said Matt.

“He was charismatic, caring, funny, loving – he was everybody’s ‘brother’. It’s a big blow to everyone who knew him and the kind person he was.”

Raheem was a carer for his elderly mother Khatun, a role Matt and his partner Konsa Micallef said he loved.

“She was his world,” said Konsa. “And not only was he her carer, but he loved doing it, she is absolutely heartbroken. Our hearts really go out to all his family and his close friends who have been a massive support to his mum throughout this entire time.”

You can read the full tribute to Raheem here.

Rachel has now set up a go fund me page to raise money to help with Ramzan’s funeral cost as well as help the family who have been devastated by the loss of both men.