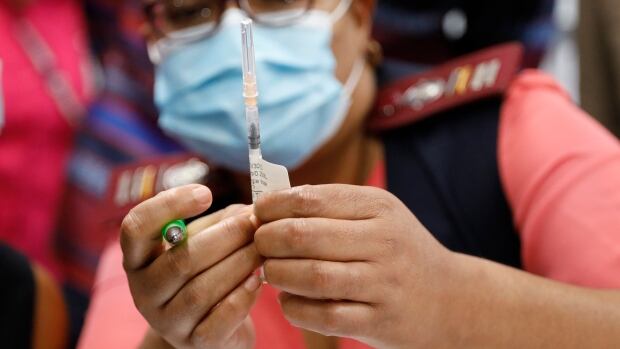 A one-dose COVID-19 vaccine is now approved for use in Canada — and vaccine experts say the shot from Johnson & Johnson could give a major boost to countrywide vaccination efforts while offering a “real solution” to hasten the end of the pandemic.

Health Canada authorized its use and released details during a Friday morning announcement.

The vaccine, made by a subsidiary of Johnson & Johnson, is a non-replicating viral vector option and, unlike the three other vaccines previously approved for Canadian use, was tested during clinical trials as a single shot.

So far, Canada is expecting 10 million doses, with options to purchase up to 28 million more if necessary, with most of those shots set to arrive by the end of September.

“You can vaccinate more people in a shorter period of time,” he said. “You don’t have to clog up the vaccine centres with people getting their second dose — it’s one and done.”

The storage requirements are also less stringent than the early freezer requirements for the two mRNA-based vaccines from Pfizer-BioNTech and Moderna, with Johnson & Johnson estimating its single-dose option should remain stable for two years at -20° C — and can be stored for at least three months in most standard refrigerators.

Wondering how each of the leading coronavirus vaccines compares? Click here for a closer look at the vaccines Canada is betting on to stem the spread of COVID-19.

“You can way more easily get a vaccine like this into primary care clinics and pharmacies, which means that you can distribute it so much more broadly,” said Bogoch, who is also a member of Ontario’s vaccine task force.

That’s good news in this country and beyond, said Dr. Zain Chagla, a Hamilton-based infectious disease specialist and professor at McMaster University.

“In remote areas of Canada, it’s a big vaccine in that sense that it’s easy to transport and get around, and it’s big for the rest of the world,” he said.

“This is a vaccine that could go into mass vaccine clinics in low- and middle-income countries that could be stored on the back of a motorcycle to make it into a very, very remote setting. That is very, very different than anything we have in that sense.”

But where the vaccine excels at convenience, it may fall short on overall efficacy — though there are a lot of factors at play, and it’s crucial to note the shot is proving highly effective at reducing cases of serious illness.

According to February briefing documents from the U.S. Food and Drug Administration, Johnson & Johnson’s shot was both safe and effective in clinical trials, where it reduced the risk of COVID-19 and prevented PCR-test confirmed cases at least 14 days after vaccination.

A month earlier, the company had announced its vaccine was 66 per cent effective in preventing COVID-19 against multiple variants in a global trial involving nearly 44,000 people.

That effectiveness varied from 72 per cent in the United States to 66 per cent in Latin America and 57 per cent in South Africa, where a new variant has spread.

That’s in contrast to the even more powerful protection witnessed in clinical trials for the Moderna and Pfizer-BioNTech vaccines, which showed efficacy levels — in terms of preventing symptomatic COVID-19 infection — of 94 per cent and 95 per cent respectively after two doses.

Those trials, however, took place before the rise of several concerning variants of this virus. Each company also tested for slightly different outcomes, meaning the efficacy levels aren’t apples-to-apples comparisons.

On Friday, Dr. Bob Wachter, chair of the department of medicine at the University of California, San Francisco likened it to comparing the scores of golfers who teed off during a calm moment to those who teed off when “winds were howling.”

“While it’s hard to make precise adjustment,” he said in a tweet, “it’s clear that equally good play will result in different scores.”

Crucially, Johnson & Johnson’s one-dose option did prove 85 per cent effective overall when it came to stopping severe cases of the disease specifically.

The company’s main study also showed that 28 days or more after vaccination, the shot 100 per cent prevented hospitalizations and deaths.

Virologist and vaccinologist Alyson Kelvin, who is working on Canadian COVID-19 vaccine development at the University of Saskatchewan’s VIDO-InterVac research institute, said for all vaccine developers, a safe and effective single-dose option has been the ultimate goal.

“Because people will be more interested in taking a vaccine if they don’t have to go back for their second shot, and which means that a vaccine will be more effective at getting to that community immunity that we need,” she said.

Like Chagla, she’s not alarmed by a slightly lower overall efficacy level.

“The goal of the vaccine is to protect people. Keeping them out of hospitals, keeping them from succumbing to disease,” she said.

And Chagla stressed that ultimately, this one-dose option could offer a “real solution” that helps countries like Canada tackle this year-long pandemic and alleviate the current burden on the health-care system from a virus that’s still widespread.