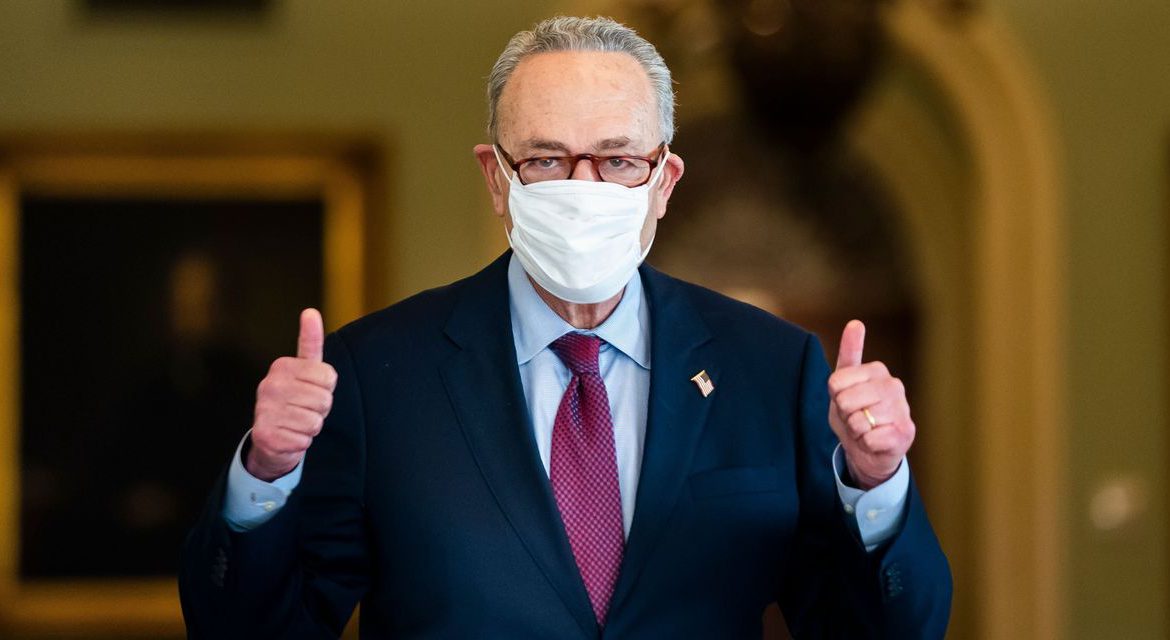 The Senate approved the package along party lines, 50-49, after deliberating all of Friday and into Saturday morning. The package now heads back to the House, which must approve the Senate-revised legislation before sending it to the White House for Mr. Biden’s signature. The House is expected to take up the measure on Tuesday.

Senators applauded the chamber’s support staff after the final vote ended a marathon session on Saturday.

The legislation would provide $300 in weekly unemployment benefits through Sept. 6, send $1,400 direct payments to many Americans, direct $350 billion to state and local governments, fund vaccine distribution and expand the child tax credit, among other aid. Congress has passed a string of relief bills since the pandemic began, including a roughly $900 billion package in December, with broad bipartisan support.

With newfound control of the Senate and the White House, Democrats moved forward on this bill without GOP support, ultimately rallying around Mr. Biden’s first legislative push after a series of internal disputes.

“This bill will deliver more help to more people than anything the federal government has done in decades,” Senate Majority Leader Chuck Schumer (D., N.Y.) said Saturday. “It is broader, deeper, and more comprehensive in helping working families and lifting people out of poverty than anything Congress has seen or accomplished in a very long time.”

Republicans stood against the legislation, focusing much of their criticism on the aid for state and local governments and the package’s overall size.

“We could have worked together to speed up victory. But Democrats decided their top priority wasn’t pandemic relief. It was their Washington wish-list,” Senate Minority Leader Mitch McConnell (R., Ky.) said Saturday.

Mr. Biden said passage of the relief bill was a “giant step forward” in delivering the help he had promised Americans.

President Biden praised the Senate’s passage of the bill with Vice President Kamala Harris at the White House on Saturday in Washington.

“It wasn’t always pretty, but it was so desperately needed,” he said at the White House. “It’s going to make a big difference in so many lives in this country,” he added.

Passage came after a marathon Senate session that lasted more than 24 hours, as lawmakers haggled over the final changes to the bill and worked through a slog of proposed amendments.

Sen. Joe Manchin (D., W.Va.) brought the chamber to a standstill for much of Friday, when he balked at a Democratic proposal to extend federal jobless benefits until Oct. 4. After hours of negotiations, Democrats struck a new deal to extend the current $300 weekly benefits through Sept. 6 and make a portion of the 2020 benefits nontaxable for some households.

Objections by Sen. Joe Manchin (D.,W.Va.), seen speaking to reporters in the Capitol on Friday, forced changes to the Covid-19 aid legislation.

Mr. Manchin did vote for a GOP amendment from Sen.

of Ohio that extended the $300 weekly benefits through July 18, but it was then superseded by the Democratic deal, which Mr. Manchin also voted for.

“Joe Manchin realized that if the Portman amendment passed, that it would sink the bill and to his credit he looked for a different alternative,” Mr. Schumer said in an interview Saturday.

The final change to the Senate bill highlighted centrist Democrats’ powerful influence in the evenly divided chamber, where a single Democratic defection would have derailed the bill. Senate Democrats lowered the weekly payments to $300 from their $400 level in the House bill, phased out $1,400 direct payments more quickly for some households and stripped out a minimum-wage increase that had passed the House last weekend.

Liberal House Democrats have said they want to see what the Senate passes before indicating whether they will support it. But they have also emphasized the need for the relief package and will be under pressure not to derail the package.

As part of the agreement reached Friday, the first $10,200 of the 2020 unemployment benefits will be nontaxable for households making less than $150,000.

“This is the longest extension of benefits that was possible tonight,” Senate Finance Committee Chairman

(D., Ore.) said Friday, noting that the agreement also moved the expiration date past August, when Congress is traditionally in recess.

Democratic leaders held open an amendment vote during the negotiations with Mr. Manchin for nearly 12 hours, making it the longest recorded vote in modern Senate history.

Mr. Manchin had been willing to side with Republicans in an effort to shorten the duration of unemployment benefits, underscoring the precariousness of the Democrats’ majority.

(D., Del.) to lower the originally proposed weekly federal jobless benefits to $300 a week, but extend them through Oct. 4 instead of Aug. 29 in the House version. The aid package Congress passed in December offered a $300 supplement, though it is set to expire on March 14.

Senate Democrats advanced a $1.9 trillion Covid-19 aid package after making a series of adjustments to it. WSJ’s Gerald F. Seib explains what changes senators were making to the bill and what would likely stay the same. Photo illustration: Ang Li

The final Democratic agreement differed from Mr. Carper’s original proposal by extending the jobless benefits to Sept. 6 rather than Oct. 4, and adding an income cap to the benefits that would be exempt from taxation.

Mr. Portman said Democrats were providing benefits that aren’t needed because the economy is recovering.

Will this round of pandemic stimulus be able to achieve the goals set by Congress? Why or why not? Join the conversation below.

“The Democratic proposal makes it even more advantageous to be on unemployment by changing retroactively a longstanding policy that says UI benefits are taxed as income,” he said on the Senate floor, referring to unemployment insurance.

After Democrats struck their deal on unemployment benefits, the chamber still slogged through the marathon of amendment votes known in the Senate as “vote-a-rama.”

Senate Democrats used a process known as reconciliation, which allows them to pass legislation tied to the budget with a simple majority, rather than the 60 votes most bills require.

The Senate blocked an amendment from Vermont Sen. Bernie Sanders to increase the minimum wage to $15 an hour.

Because the process allows the majority party to pass legislation on their own, Senate rules carve out a place for lawmakers in the minority to make their voices heard, by allowing them to vote on an unlimited number of amendments. After the delay on Friday, lawmakers plowed through amendments through the night and Saturday.

Many of the amendments offered late Friday and Saturday were designed to emphasize Republicans’ criticisms of the relief bill, including how its funding for schools is structured and its overall price tag. Some garnered bipartisan support though, with one amendment directing $800 million toward aid for homeless youth.

The Senate blocked an amendment from Budget Committee Chairman

(I., Vt.) to increase the minimum wage to $15 an hour. That was a plank of the bill passed by the House, but it was stripped out of the Senate version when the chamber’s parliamentarian ruled it didn’t comply with the rules. All 50 Republicans and eight Democrats opposed Mr. Sanders’s amendment.

The impact of the new tax exemption on unemployment benefits would vary by person. Some with relatively low incomes overall wouldn’t get much of a benefit, but a middle-income person could save more than $1,000.

The move would reduce or eliminate surprise tax bills for those who qualify. Withholding varies across states, so many people hadn’t been paying enough during the course of 2020.