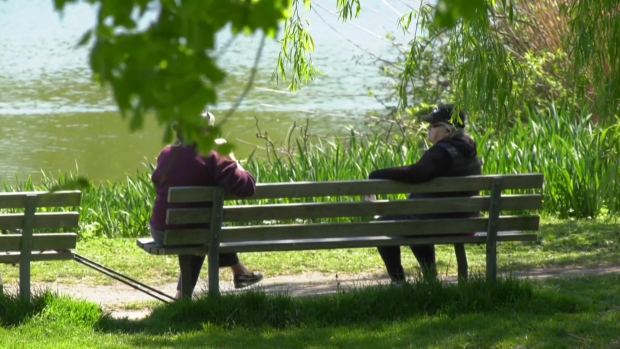 VANCOUVER —
As British Columbia sees a spike in COVID-19 variants and infection numbers creeping upwards, a Canadian epidemiologist is urging west coast policymakers to use the mild weather to full advantage and encourage people to socialize outside.

Despite an estimated 100,000 articles written by academics, researchers and scientists on SARS-COV-2, easily the most studied virus in history, not a single case study has found any outbreaks linked to outdoor activities, like picnics, playgrounds or rallies.

“At this point we have a really solid understanding that (COVID-19) is an infection that really happens indoors — it happens in particularly crowded spaces, in poorly ventilated spaces and often in people’s workspaces and also in people’s homes,” explained Dr. Stefan Baral, a Toronto-based physician who’s also associate professor of epidemiology at Johns Hopkins School of Public Health.

“In reviewing the literature, it’s been very hard to find even a single or a couple actual documented episodes where people were only outdoors and their only exposure was outdoors and it resulted in an outbreak.”

As the weather warmed up last year, throngs of park-goers and partiers at Vancouver beaches alarmed onlookers and prompted chiding from the province’s top doctor, who warned while the risk was low outdoors it wasn’t zero risk; no case surges were associated with those gatherings, nor anti-racism rallies and marches where demonstrators were largely masked.

Now, Dr. Bonnie Henry is already laying the groundwork for outdoor socializing to be the first step in relaxing the “social lockdown” the province has been in since mid-November, and has required people to stick to their immediate household, with limited exceptions for those who live alone.

“We need to phase in our ‘yes, let’s go outside, let’s meet up and go for a walk, let’s meet up with our close friends and sit outside at an appropriate distance from each other,’” said Henry at a briefing on Monday, suggesting that such small gatherings with close friends or family could start as early as this weekend, as many schools begin spring break. “But still being very careful about those people who are still at risk of having severe illness.”

Henry has always encouraged going for a walk with a friend and getting fresh air throughout the pandemic, but has banned all gatherings since November, even if they’re outdoors.

Baral is more bullish, however, and believes people should be outright encouraged to have the space and freedom to let loose in open-air settings and circumstances where the risk is low, with the understanding the only way to get to “no risk” is to stay home.

“I think what we really should’ve focussed on is understanding people have a certain amount of energy to invest in public health interventions and we want them to invest that energy in the most high-yield possible interventions, which is again when they’re in people’s home space, really ensuring they’re masked, when they’re at their work, really taking all the precautions that need to be taken, especially if they’re essential workers,” he explained. “In some ways, young people socializing is like water flowing — you want to almost direct it in the right way, in a healthy way, because they are going to do it anyways.”

He is urging civic governments to not only provide free parking and easier access to outdoor space, but to even provide barbecues and other amenities to make it easier to socialize and eat outside. Young adults who live in small apartments without outdoor space, or those in shared accommodations may feet the burn of critical eyes, and Baral wants the public to think about outdoors as a good thing rather than a reason to shun.

“Be outdoors and be smart about it, because I think sometimes what happens is people are outdoors but then they join (the host) indoors and do dishes together or something at the end of the night, so really it’s an element of being vigilant that you really do keep it as an outdoor event.”​