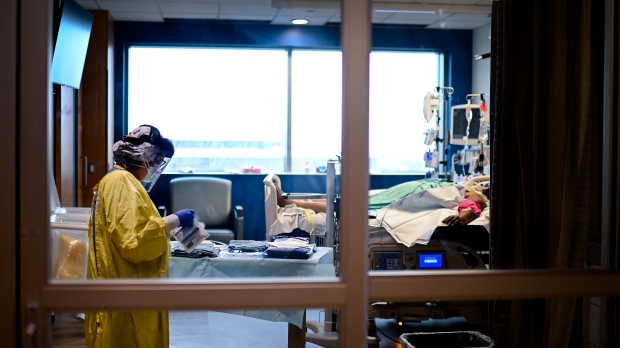 Ontario reported 1,371 new COVID-19 cases on Friday along with 18 new deaths as the province’s active caseload hit its highest point in more than three weeks.

Health Minister Christine Elliott said that there were 371 new cases reported in Toronto, 225 in Peel, 111 in York Region and 109 in Hamilton.

The number of active cases now stands at more than 11,500, the highest it has been since Feb. 16.

Of the 18 deaths reported Friday, none involved residents of the long term-care system.

Provincial labs processed 64,611 samples in the past 24 hours, generating a positivity rate of at least 2.4 per cent.

A further 36,744 samples remain under investigation.

“We’ve already seen a slight little bump in the cases – that’s more than a blip in the data, that’s a real trend. There’s certainly has been a plateau and even a slight rise in the cases, how much of a rise completely depends on us.”

Yesterday, the scientific director of Ontario’s COVID-19 Science Table, responsible for modelling and other calculations since the onset of the pandemic, told CTV News that the spread of the B.1.1.7 coronavirus variant in the province meant a third lockdown period was likely.

Modelling data released yesterday predicted between 1,650 and 8,000 cases per day by the start of April, depending heavily on adherence to public health measures, public mobility and the prevalence of B.1.1.7.

Bogoch said that he thought that prospect was avoidable if the existing restrictions were followed widely.

“We need political leadership, public health leadership and of course we need individual buy-in. If we do, we might get away with a small little ‘wave-let’.”

The number of cases of highly-contagious variants of concern fully confirmed through whole genomic sequencing pushed past 1,000 on Friday, with 49 new cases of B.1.1.7, one new example of B.1.351 and six new cases of P.1.

Public Health Ontario said Friday another 6,859 cases have screened positive for one of the variants of concern, with screening more than 90 per cent accurate in detecting variants of concern over the past three months in the province.

Hospitalization numbers in the province continue to be relatively flat.

On Friday, there were 676 people in hospital across the province due to COVID-19, according to Ministry of Health data.

Of those, 282 people were in intensive care and 189 were breathing with the help of a ventilator.

But a count of data reported by public health units and hospital networks on Friday found at least 858 people receiving care in Ontario hospitals due to COVID-19.

The province says it administered 43,503 doses of coronavirus vaccines yesterday, bringing the total number of shots administered to 1,062,910 since Dec. 15, 2020.

More than 282,000 people have completed their full two-dose inoculation.

The numbers used in this story are found in the Ontario Ministry of Health’s COVID-19 Daily Epidemiologic Summary. The number of cases for any city or region may differ slightly from what is reported by the province, because local units report figures at different times.