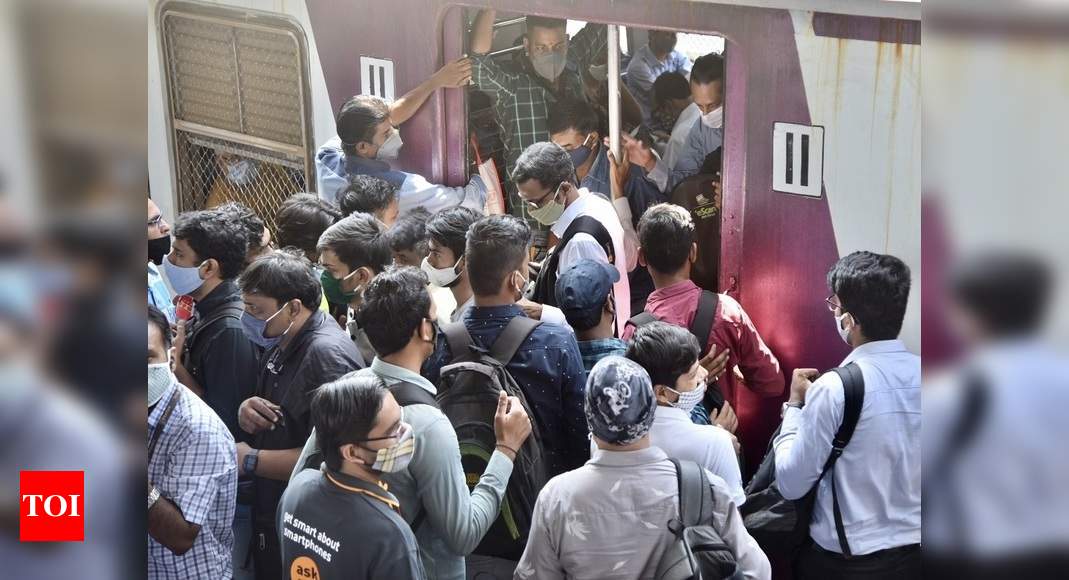 NEW DELHI: New restrictions are likely to be imposed in Mumbai and parts of the state on Tuesday as the second wave of Covid-19 infections shows no signs of ebbing.
The curbs could include new attendance norms for offices and businesses, some control over crowds at temples and shrines, and fresh bars on social events – private and public.
Mumbai on Saturday recorded its biggest single-day spike of this year with 1,709 new cases. The Brihanmumbai Municipal Corporation (BMC), in an attempt to tell residents where the city was headed, tweeted that on January 11 this year, the city had recorded only 239 new cases.
The figures for the state were no less worrying with 15,602 new cases and 88 deaths. Mumbai, Pune, Nagpur and Thane are currently the worst-affected districts in the state. The state contributed more than half of all cases recorded in the country.
Chief minister Uddhav Thackeray was scheduled to spend the weekend meeting business heads; restaurant and hotel owners; and heads of big temples, churches and mosques. On Tuesday, he will hold consultations with key members of the state’s Covid-19 Task Force, Deputy Chief Minister Ajit Pawar, Health Minister Rajesh Tope and Chief Secretary Sitaram Kunte.
Thackeray, on more than one occasion in the past couple of weeks, has threatened to re-impose restrictions on movement of people and large gatherings if people refused to follow simple instructions like wearing masks in public and following social distancing.
The BMC, meanwhile, has decided to increase the number of private hospitals involved in vaccination from 50 to 88 with the target to inoculate 100,000 people every day. A policy decision has been taken to eventually allow every hospital which has more than 50 beds to undertake vaccination.
Top doctors and administrators on Saturday said reports of a new strain of Covid-19 being responsible for the spike are not true and it is only people’s callous approach to social distancing, wearing of masks and maintaining general hygiene that is contributing to the rampaging numbers.
While lockdowns and curfews have been declared in some cities, including Nagpur, Amravati, and Parbhani, Thackeray on Tuesday is likely to announce new norms for micro lockdown and declaration of containment zones.
The State Task Force head Dr Sanjay Oak said in terms of precautions Mumbai and other cities will have to go back to the discipline of last summer. “There is no question of a new strain. No evidence has been placed before the Task Force to indicate the rising numbers are attributable to a Covid-19 mutation,” he said.
While the focus at this point is to ramp up vaccination, the advantage accrued due to this is being lost to the rapid increase in infections because of people rushing to resume their social lives. “Our estimate is that only when 80% of the state’s population is inoculated can we assume some sort of control over the situation, but we are nowhere near that,” he said.
The Task Force has requested the state government to increase the number of vaccination centres. “New centres can set up in residential society complexes. We have also asked for mobile vans to provide door-to-door vaccination services,” Dr Oak said, adding that “people must understand that one infected person can infect 400 others. So, the virus is capable of beating our best efforts.”
Dr Rahul Pandit, a member of the Task Force, said while Maharashtra is undeniably in the grip of a second wave, detection of such large number of infections is also linked to the state’s capacity to test. Mumbai and the Metropolitan Region carry out over 20,000 tests every day, the highest of the country’s big cities. The ratio of RTPCT tests vis-à-vis antigen tests is also highest in Mumbai at 70:30.
Another Task Force member Dr Shashank Joshi said the positivity rate has worryingly gone up from 2% to 7% in Mumbai and MMR region. “While earlier the norm was to trace 20 people for every primary infection, we have suggested this should be increased to 30 people for every primary infection. If more than 15 people are found to be positive in an area, that area should be sealed.” Dr Joshi said the Task Force has also asked BMC to enforce use of double masks in local trains and crowded places like markets.
The silver lining, Dr Joshi said, is the low death rate — 0.5% in Mumbai and 2.5% in the state.
Measures imposed by the government
Double masks recommended for travel by local trains 30 people to be traced for every primary infection Seal orders if more than 15 test positive in an area New norms for micro lockdowns, containment zones 38 more private hospitals to carry out vaccination

Don't Miss it COVID-19 Live Updates: News on coronavirus in Calgary for March 13
Up Next The curious case of India's plummeting coronavirus curve | ABC News