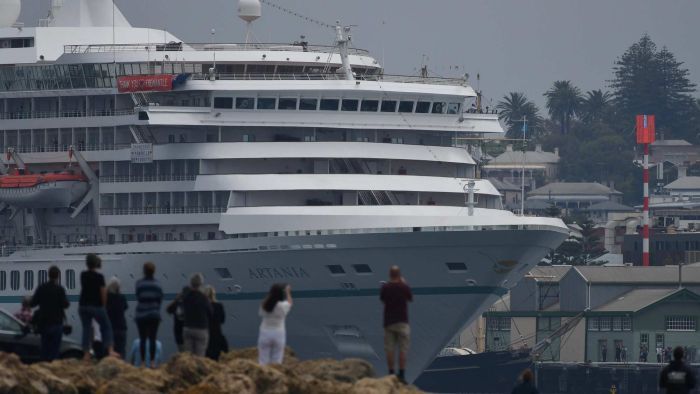 The Artania cruise ship has left Fremantle more than three weeks after it arrived carrying dozens of sick passengers and crew, as the WA Premier criticised a worker who contracted COVID-19 on holiday in Bali.

Key points:The Artania has been docked at Fremantle Port since late last monthA total of 81 passengers and crew have tested positive for COVID-19Three new WA cases include a Rio Tinto contractor who visited Bali

The ship moved away from Fremantle Port and out to sea just after 1:00pm, carrying 411 crew and passengers.

Crew members and some of the few remaining passengers waved and gestured from the Artania to large crowds who had gathered to watch them depart.

The vessel’s departure came as Premier Mark McGowan announced there were just three more cases of coronavirus in the state, two of them from the Artania.

The third case is a West Australian Rio Tinto worker who had recently travelled to Bali on holiday.

Mr McGowan said the contractor had “obviously acquired the illness there” and had jeopardised the health and wellbeing of other West Australians.

“It was pretty selfish and irresponsible to have travelled to Bali in the circumstances we were facing during the March period,” he said.

“I just find it quite irresponsible. And the people who did that make me angry that they now come home and cause these problems.”

Rio Tinto said it screened and tested the man at Perth Airport before he could return to work.

The Department of Health said there was no cause for public alarm and “should not be interpreted as potential community transition.”

The Artania is now responsible for 81 of Western Australia’s 544 coronavirus cases, according to the latest available figures.

Three people from the German cruise liner died from the virus while in WA, including a 42-year-old Filipino male crew member who passed away in Royal Perth Hospital on Friday.

There are 33 coronavirus patients still in WA hospitals, with just six of them in intensive care.

The Artania has finally left port after a protracted stand-off with state and federal authorities and following an operation this morning where crew and passengers were ferried to and from the Artania.

Some 36 European crew members, including musicians carrying their instruments, were brought to a hotel in Perth’s CBD to undergo coronavirus monitoring.

Four buses under police guard transported them from Fremantle, where the ship has been docked since late last month.

The group is expected to fly out of Perth tomorrow, along with around 25 other passengers who were already in a Perth hotel, on a charter flight organised by the cruise ship’s operator.

One passenger was taken to hospital by ambulance this morning after medical experts ruled she was not well enough to sail, although it is unknown if her illness is related to COVID-19.

Buses this morning took another 63 people — 55 passengers and eight crew members— from the city back to the Artania.

Before the ship left, two crew members were married on the wharf in Fremantle, just near the Artania’s gangplank.

The ship’s operators had fought back against an Australian Border Force directive to leave Australian waters at the start of the month.

Mr McGowan had also repeatedly demanded the Artania leave, but the crew sought to remain for a further two weeks.

The majority of the ship’s foreign passengers were flown to Europe on charter flights weeks ago, but hundreds of crew remained on board in quarantine.

While the Artania’s refusal to leave prompted an at-times tense stand-off with authorities, not everyone was unhappy with its presence.

A group of Perth school children has written heartfelt postcards to each of the crew members left on the Artania cruise ship, wishing them a safe journey home.

“These pictures and messages have brought a bit of warmth and love into our hearts during this challenging time!” the Artania’s captain, Morten Hansen, said on Facebook.

“Thank you, kids, very much for the nice words and next time we are here we are looking forward to [seeing] your charming city.

“One day when all of this is over, hopefully some fond memories will still remain for us all, and perhaps we will all feel a greater sense of global community.”