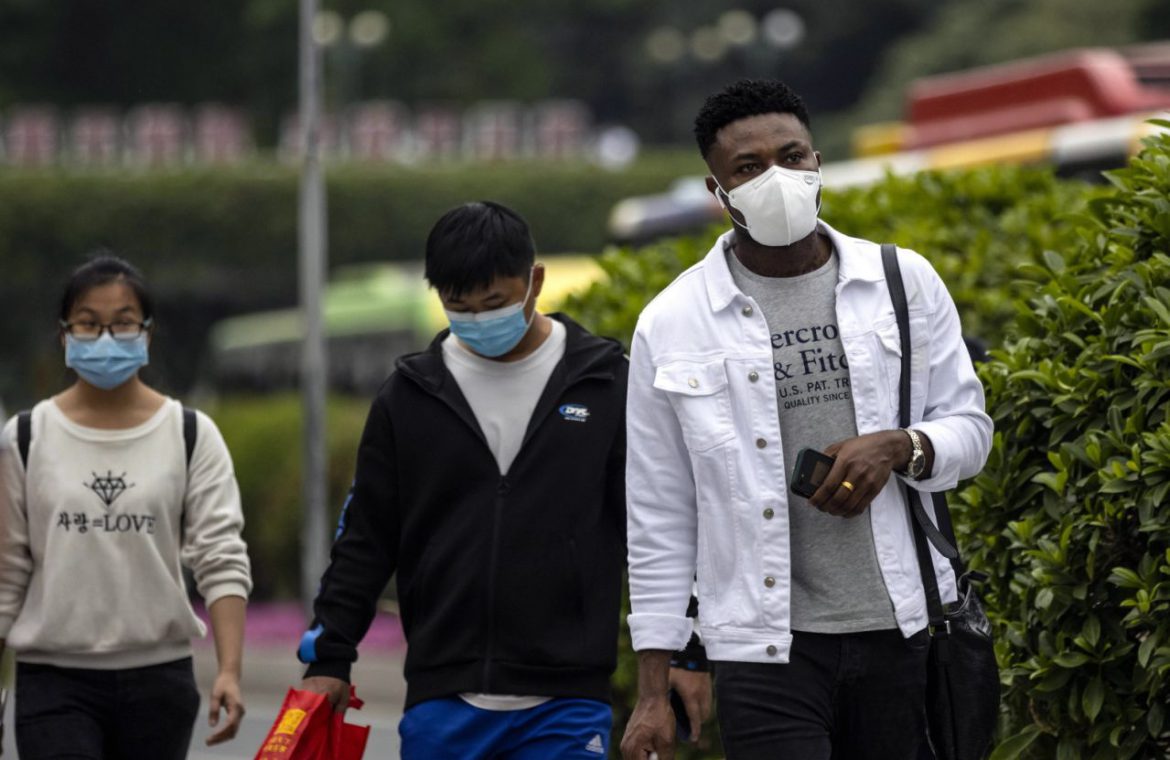 Chinese officials are denying allegations that people of color are facing discrimination and even eviction under coronavirus mitigation efforts, as they report that Africans are among the country’s newly confirmed cases.

The Chinese state news agency, Xinhua, reported last week that 111 people from Africa living in the city of Guangzhou had tested positive for the coronavirus. This followed confirmation from U.S. and African officials — and at least one business — that people were being denied services, subjected to COVID-19 tests and forced into supervised quarantine.

A group of African ambassadors in Beijing were the first to raise the issue, co-signing a letter saying Africans were being subjected to humiliation and harassment despite adhering to local policies designed to mitigate the spread of the virus. Africans from Togo, Nigeria and Benin had been evicted from hotels in the middle of the night, a group of African students was forced to take tests despite not having traveled recently, and others reported being threatened with having their visas and work permits revoked, said the letter, addressed to China’s foreign ministry.

The U.S. Consulate General then issued a warning on April 13 that people appearing to be of African origin or in contact with African nationals were being forced to take COVID-19 tests and undergo quarantine — under supervision and at their own expense in some cases — regardless of their recent travel history or whether they had already completed a required period of self-isolation.

“African Americans have also reported that some businesses and hotels refuse to do business with them,” it said.

At a McDonald’s in Guangzhou, a video shared on Twitter showed workers carrying signs that say “black people are not allowed to enter the restaurant.”

McDonald’s responded by saying the signs were removed immediately and the restaurant has been temporarily closed.

“This is not representative of our inclusive values,” the company said in a statement to NBC News. “We will take the opportunity to further educate managers and employees on our values, which includes serving all members of the communities in which we operate.”

Other videos showed African residents being escorted down a city street after allegedly being evicted from their homes. NBC News could not verify the video’s authenticity.

However, the Ugandan Embassy confirmed that some of their citizens in China had been evicted, but clarified that this was due in part to their legal status in the country.

As a result of the greater scrutiny of residents and their travels under coronavirus mitigation measures, Ugandan workers who had overstayed their work permits were being caught, said Philip Kanyoonzi, Uganda’s acting ambassador to China.

“Their landlords were quickly pushing them out of their homes in order not to be caught on the wrong side of the law by China’s government,” Kanyoonzi said.

“We have engaged China to say that, yes, we acknowledge that these people may be illegal migrants, and therefore on the wrong side of the law, but nevertheless they need to be treated humanely,” he said.

Kanyoonzi said Chinese officials had assured him the situation would be rectified but did not provide specifics.

Temporary temperature checkpoint is seen behind the once bustling markets of Guangzhou’s Sanyuanli area, as the spread of the novel coronavirus disease (COVID-19) continues in the country (David Kirton / Reuters)

Botswana’s ambassador to China also met with government officials last week to address “reported incidents of mistreatment of Africans” and “find an immediate remedial action,” the Botswana government said in a statement. It also encouraged Botswana nationals to adhere to China’s measures to stop the spread of the coronavirus.

In Nigeria, Foreign Affairs Minister Geoffrey Onyeama said on Twitter that he had met with Chinese Ambassador Zhou Pingjian and called for immediate government intervention into how Nigerians were being treated.

The U.S. has advised African Americans or anyone who has been in contact with African citizens to avoid the Guangzhou metropolitan area and to carry their identity documents at all times.

China has repeatedly denied discrimination in its handling of the virus.

Zhao also accused the United States of trying to fuel a dispute between China and Africa, saying “the U.S. side is arrogant and provocative, which is neither moral nor responsible.” In a tweet on Tuesday, Zhao said that China’s “friendship with Africa is unbreakable,” and that “smearing or wedge-driving would never succeed.”

For the 111 African cases identified in Guangzhou, some of whom were asymptomatic, Xinhua reported that they were required to undergo quarantine just as Chinese citizens would.

“The Guangzhou authority provided the same hotel and staff for all patients without any racial or ethnic discrimination,” said Chen Yongqiu, deputy director of public security for the city.

China first reported cases of COVID-19 in the city of Wuhan on Dec. 31, according to the World Health Organization. Since then, the country’s health officials say at least 82,249 people have been infected and 3,341 have died.

Don't Miss it Ontario’s COVID-19 deaths rise to 610, health units report; Quebec deaths rise to 877; Canadian actor has leg amputated
Up Next What is the WHO and how is it handling the coronavirus pandemic? | COVID-19 Special