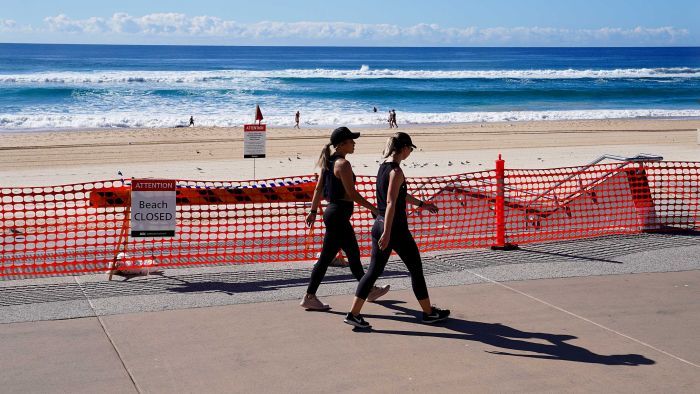 It has been 87 days since Australia’s first case of coronavirus was confirmed.

Since then, our lives have completely changed as we all do our bit to stop the spread and protect those most vulnerable.

It hasn’t been easy — but the Prime Minister, Health Minister and Chief Medical Officer have said we’re at a critical (but early) stage on the road back to normal.

Scott Morrison, Greg Hunt and Brendan Murphy delivered some updates to the coronavirus response — catch up on their key points.

We’re starting to walk the ‘road back’

The coronavirus road has been one of steep hills, twists, turns, and a few massive roadblocks.

Health Minister Greg Hunt said Tuesday was an important day on the “road back” — but we have to keep doing what we’re doing and continue distancing measures.

“There is progress on all three fronts — on containment, capacity and recovery,” Mr Hunt said.

“These measures save lives and protect lives but they also allow us to achieve the road back at an earlier time.”

Prime Minister Scott Morrison said we have to “stick to our plan” for now, and that baseline restrictions remain in place.

“To do that we have got to move carefully about what we’re doing.”

Photo:
Prime Minister Scott Morrison says we must “stick to the plan” to control coronavirus in Australia. (ABC News: Ian Cutmore)
The curve is flattening, but not enough to return to normal

The good news: about two-thirds of Australia’s coronavirus cases have recovered.

The PM said there was less than 2,500 active cases in the country as of Tuesday afternoon.

The not-so-good news: while there has been a drop in positive tests, the virus is still spreading — so we can’t drop the ball on prevention measures yet.

Mr Hunt said the efforts of Australians is resulting in a “sustained and consolidated flattening of the curve” with less than one per cent growth in cases for the past nine consecutive days.

“I want to say thank you for what people have done. You have made this happen,” he said.

Tweet @Peter_F_Ryan “We now have a sustained and consolidating flattening of the curve .. a collective national achievement”

Mr Morrison said a low rate of transmission was one of the main prerequisites necessary before things could start to return to normal.

“We said there needed to be an effective rate of transmission less than the score of one,” he said.

“And we said we need to get in place over these four weeks that we’re now in — almost one week down in that timetable — testing, tracing and a response capability on the ground.

“National Cabinet will continue to look at those areas that may be able to be eased at the end of that period when we look at those issues.”

So, we’re not ready to throw open the doors of pubs, gyms and airports just yet.

But because of our strong results so far, the Government is slowly looking at ways we can bring back some normalcy — which leads us to some great news for people waiting on operations.

The National Cabinet has agreed that after Anzac Day (this Saturday), restrictions on elective surgeries will start to lift.

Mr Morrison said it will be a “gradual restart”, but will include category two and some category three procedures (like IVF, some eye and dental procedures, post-cancer procedures and more).

“We estimate that this will lead to a reopening of around 25 per cent of activity in elective surgery in our private and public hospitals,” he said.

The PM said this decision will be reviewed again on May 11, to see if more elective surgeries can recommence.

Aged care facilities around the country have imposed various restrictions on visitors — some have gone into total lockdown, banning visitors completely.

Mr Morrison said the issue of visitors being banned was considered by state and territory leaders — indicating that in some cases, it was going too far.

“There needs to be a strong reminder that the National Cabinet decision was to not shut people off or to lock them away in their rooms,” he said.

Mr Morrison said there were circumstances where further restrictions were necessary to avoid outbreaks in aged care facilities, which can be deadly.

“But those additional restrictions are the exception, they are not the rule, and I think it is a good thing for people to have those visit in accordance with those screening procedures and other things that are necessary to protect elderly residents in those situations,” he said.

Mr Morrison said similar advice applied to elderly people who are self-isolating in their homes — people can still visit for care and compassionate reasons.

“This is important, I think, for the mental health and well-being of elderly residents in our community,” he said.

“There should be the obvious constraints on that, not saying that there should be 50 people going through an elderly resident’s home on a daily basis, they should be limited to those who would normally look in on people and take good care of them.”

Chief Medical Officer Brendan Murphy issued a reminder that if you’re feeling sick in any way, do not go and visit elderly people or aged care homes.

Term 2 has started for most students around Australia — and this looks different in each state and territory.

While the majority of students have been encouraged to learn from home, school gates are still open for children who need to be there.

Mr Morrison didn’t go into schools extensively when he spoke on Tuesday, but he did touch on the social distancing rules that are in place in the broader community being different for schools.

“There is no requirement from the medical expert panel that there be a four square metre per person rule enforced in those classrooms,” he said.

The National Cabinet was briefed on the new coronavirus tracing app on Tuesday — and Mr Morrison said the reaction from states and territories has been positive.

“Firstly, it protects Australians in their own health and those of their own family by participating in this process,” he said.

“Secondly, it helps other Australians to keep them safe and, thirdly, it ensures that we can more effectively get back to a more normal setting where we have widespread take-up of this app.

“We will say more about that when we are in a position to launch the app in the not-too-distant future.”

JobSeeker (formally known as Newstart) was recently boosted to assist Australians who have lost employment due to coronavirus.

Mr Morrison said that by the end of this week, the same amount of JobSeeker claims usually processed in an entire year will have been processed in the past six weeks.

“Additional stimulus payments of some $4.5 billion in the $750 payment has been paid as of yesterday to just under 6 million Australian and the rest will flow in coming days.”

Mr Morrison said the fact that over half-a-million people have claimed the JobSeeker payment is “obviously of great concern”.

What the experts are saying about coronavirus:
Australia’s medical equipment supply is tracking well

Mr Hunt provided an update on Australia’s testing efforts, confirming that as of Tuesday morning, 434,000 tests had been completed.

He said the supply of medical equipment was flowing, after reports of shortages emerged in recent weeks.

“We have delivered into Australia 60 million masks that has allowed for 22 million distributions with another 11.5 million masks to be distributed over the coming week,” he said.

“And we have secured a further 100 million masks over the coming six weeks.”

Australia has also hit a milestone of reaching “full capacity” for ventilators, with 7,500 in place nationally.

“That is an extraordinary achievement across our hospitals and across the country,” Mr Hunt said.

Don't Miss it India’s Lift of Cryptocurrency Trading in the Context of COVID-19
Up Next Coronavirus: Trump halts WHO funds amid falling poll numbers | DW News