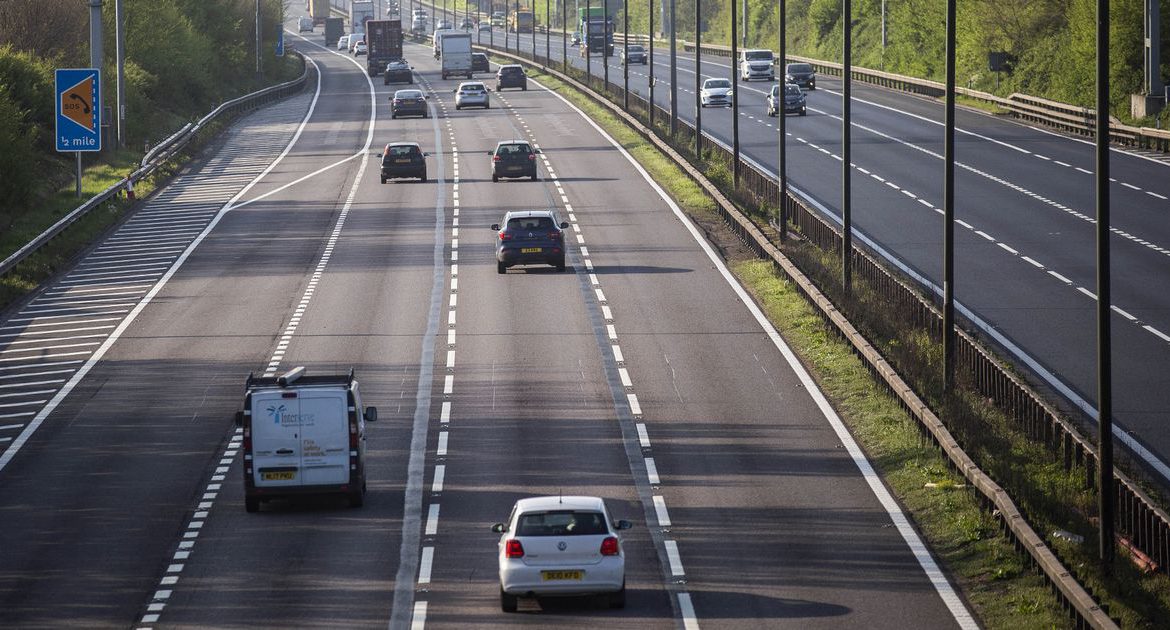 Traffic on the road appears to be increasing and more businesses reopening as the country passes the one-month-in-lockdown mark.

On the evening of March 23 Prime Minister Boris Johnson announced that the UK would enter into lockdown.

All schools were shut, all non-essential businesses closed and most journeys were outlawed.

A month on and, despite the fact that the coronavirus infection rate has not started to fall significantly, some parts of the UK seem to be reopening.

Photos taken from motorway bridges appear to show more traffic on the M25, M5 and M4 than in recent days.

The major roads are not back to normal, but the photos do show a steady stream of traffic.

The motorways seem to be getting a little busier
(Image: SWNS)

This apparent upturn comes despite non-essential journeys still being outlawed, with police forces able to collar and fine those who venture out without a proper purpose.

On April 12 – Easter Sunday – traffic on UK roads fell to just 20% of pre-lockdown levels, according to data from the Department of Transport.

A week later however, and that figure had risen to 30% – equivalent to the highest number of daily journeys than since the lockdown began.

As well as lockdown fatigue, the reason for these extra trips may be to do with the increasing number of destinations on offer.

Stores including B&Q, Nandos and Burger King have begun to remove the mothballs and fire up their tills again.

B&Q carried out a trial reopening of 17 stores over the weekend, in order to try out whether social distancing measures could be followed.

Today it was announced that a further 45 outlets would be reopened, with two metre floor marking throughout the building and clear guards in front of the cashiers desks.

B&Q is not the only business which has reopened.

KFC has opened the doors of 11 of its restaurants, for delivery only, and with staff having to volunteer to work.

The DIY outlet is starting to allow customers back in
(Image: WalesOnline/ Rob Browne)

Nandos has also reopened four shops – four in London, two in Manchester and one in Dublin.

The chicken business is putting its peri-peri expertise to good use by providing 1,700 free meals to key workers each day.

Burger King is also tentatively warming up its engines after a month of being closed.

The M25 is still much quieter than it usually is
(Image: SWNS)

The fast food giant has reopened two restaurants in Bristol, one in Coventry and one in Swindon.

Staff will wear masks and gloves to cook food, which will be delivery only.

While it is offering a parred-back menu with 30% of the usual items, it is donating 1,000 meals to NHS staff a week.

The royal patty provider is not the only burger shop up and running either.

Five Guys is opening a further seven stores, adding to the 13 that remained open during the lockdown.

Five Guys has opened its door on a few of its outlets
(Image: Doug Peters/EMPICS Entertainment)

The reopening of parts of Britain’s hospitality sector comes despite the fact that most journeys are still outlawed.

Police are issuing fixed penalty charges to anyone they consider to be away from their homes without good reason, with £60 for a first offence and £120 for a second.

Yesterday Professor Jonathan Van-Tam, deputy chief medical officer for England, warned that the country was by no means out of the danger zone yet at the Downing Street press conference.

For the past week and a half the number of new cases confirmed daily in the UK was between 4,000 and 5,000, with only the earliest hints that the infection curve was falling.

“It isn’t clear there is an enormous downturn at this point,” Professor Van-Tam said.

“The numbers are varying day to day but they remain high and we remain in a situation of danger that we must take very seriously indeed.”

Don't Miss it Coronavirus: Australians asked to download app to track our movements | ABC News
Up Next Ontario premier clarifies suggestion that COVID-19 restrictions could loosen by Victoria Day