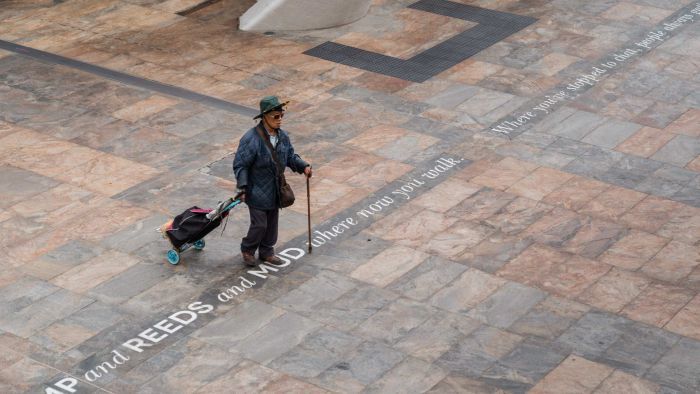 Photo:
Human activity across Perth’s CBD was down 57 per cent in April. (ABC News: Hugh Sando)

Not even being one of the most isolated cities in the world could protect Perth from being almost completely shut down by the global COVID-19 pandemic.

Safeguarded almost 2,700 kilometres from the nearest Australian city, Perth is operating at just a fraction of its usual pace.

Businesses are closed, jobs have been axed, the city’s streets are deserted.

However, there are some promising signs life will soon begin reverting to a more normal pace.

Only five new cases of COVID-19 have been recorded in Western Australia over the past week, and just 63 people in a population of almost 2.6 million remain sick with the illness.

Photo:
Activity in parks across Perth is down about 28 per cent, according to Google. (ABC News: Hugh Sando)

The encouraging results have spurred WA’s Premier, Mark McGowan, to investigate lifting some of the state’s harsh restrictions on social and commercial activity by as early as Friday.

Mr McGowan capitalised on Perth’s unique seclusion from the rest of the world, moving quick to close state borders and set up road blocks preventing travel around WA.

“In effect, we will be turning Western Australia into an island within an island. Our own country,” he said when announcing the hard border closures on April 2.

“These are drastic steps … but it will give us the best chance of combatting the virus and minimising the spread throughout our community.”

The impact of those measures — and of the pandemic itself — can be felt around the city.

The City of Perth has reported a steady decline in people visiting the CBD over the past two months.

Using wi-fi sensors to gauge people’s movements around densely populated areas, the city has recorded an almost 80 per cent drop in CBD activity on Friday evenings — usually the busiest night of the week.

In Northbridge, the city’s entertainment district, the situation is even more grim.

With pubs, clubs and restaurants shut, activity levels have fallen 93 per cent compared to a typical Saturday night.

Photo:
Restaurants in Perth’s CBD that have managed to stay open are restricted to take-away service only. (ABC News: Hugh Sando)

Across the entire Perth CBD, human activity is down 57 per cent compared to an average day in April 2019.

However, there are green shoots.

Adjusting to the ‘new normal’

According to movement data collected by Google, visits to Perth grocery stores and pharmacies have almost returned to normal levels after dropping off by 40 per cent in mid-March.

Visits to retail and recreation precincts have rebounded to 33 per cent below usual activity levels, after plunging to 80 per cent over the Easter long weekend.

More people are spending time at home, with activity in residential areas increasing by 18 per cent.

During the Easter break, typically a time when families holiday away together, that figure was much higher.

This City of Perth said its wi-fi sensors had reported a slight increase in overall vehicle traffic and people movement since the Easter break.

Photo:
Activity in retail precincts, such as the Carillon City shopping mall in Perth’s CBD, was down by between 30 to 40 per cent. (ABC News: Hugh Sando)

The city said construction activity in the CBD remained strong and there was a noticeable increase in food delivery and couriers.

“That shows a ‘new normal’ rhythm of activity, albeit at reduced levels compared to pre-COVID-19 timeframes,” said the city’s chair commissioner, Andrew Hammond.

“Traditional business hours activity in the CBD and Perth malls are reduced but shows a daily rhythm as workers still deliver essential services and come into the city for various needs.

“That reflects core services and various organisations adapting to a new way of doing business.”

While visits to the city’s malls are down, Mr Hammond said workers and shoppers were still visiting them, but for shorter durations, before returning home.

Interestingly, environmental sensors located at schools across the district have found there had been some reduction in dust particles in the air.

Commuter movement grinds to a halt

Public transport use and vehicle traffic nosedived across Perth in the wake of the COVID-19 shutdown, but there are small indications that may be starting to change.

Weekday freeway traffic bottomed out during the first week of April, with Wednesday April 1 the quietest day on the freeway, recording 33.7 per cent less traffic than usual.

The Easter long weekend was eerily quiet, with almost half the amount of traffic using the freeways compared to Easter in 2019.

And while it was too early to say for sure, April 23 appeared to be the busiest Monday commute on the freeways in four weeks.

The number of people using buses, trains and ferries in Perth plunged by 89 per cent in the week beginning April 5.

While that number retracted slightly the following week to 83.9 per cent, the Public Transport Authority suggested that could have reflected the beginning of school holidays.

Google has reported activity around Perth train and bus stations was down 57 per cent on usual levels.

Apple has also released data based on the requests people lodged for directions in their maps app.

The tech company reported a 79 per cent drop in public transport use in Perth, driving had dropped 47 per cent and even walking journeys were down 37 per cent.

Perth Airport has seen passenger movements decline by 26 per cent in March compared to 2019, with international passengers declining 45 per cent.

Those numbers are expected to fall drastically further when data for April becomes available.

Transport Minister Rita Saffiotti said the WA Government would continue to press on with its flagship Metronet public transport projects ahead of a resumption of services in the medium term.

“Our massive pipeline of major road works, cycling projects and Metronet is allowing work to continue through this crisis, and will also be part of a wider economic recovery plan for the state,” she said.

“At this stage it’s too early to be able to assess the wider impacts of COVID-19 on project timeframes.”